ERG and OCT abnormalities in retinoblastoma after melphalan intravitreous injection

The use of intravitreal melphalan was first introduced by Kaneko and Suzuki in the 1990s,(1), and has been widely used in retinoblastoma centers all over the world after many reports demonstrated the drug efficacy and safety. This treatment emerged as a promising technique for active recurrent or persistent vitreous seeds, improving the eye salvage rate to ~87% and tumor control to ~81%(2).

The control of vitreous seeds has been the main limiting factor for saving an eye with retinoblastoma, and their presence at diagnosis significantly reduces the prognosis for tumor control and eye salvage. The widespread adoption of intravitreal chemotherapy enables saving an eye that previously required enucleation(3). Despite its efficacy in controlling vitreous disease, intravitreous melphalan is an alkylating agent; thus, it can cause ocular toxicity(4). The posterior segment is usually involved, and electroretinogram (ERG) analysis is an important tool for objective assessment of retinal function and damage, treatment outcome, and especially, the safety of intravitreal melphalan dosage. Intravitreal melphalan injections can result in decreased ERG response, which is indicative of retinal toxicity(5,6).

An 18-month-old girl referred for evaluation of leukocoria of the left eye (OS) was submitted for ocular examination under anesthesia, brain and orbital magnetic resonance imaging (MRI), and a full physical exam by a pediatric oncologist. Under anesthesia, intraocular pressure and anterior segment were examined, and indirect ophthalmoscopy was performed. Documentation was provided with anterior segment and fundus drawings, fundus photography, posterior segment optical coherence tomography, and full-field ERG. OS showed an inferonasal solid white retinal tumor with prominent vasculature associated with an avascular dense cloud in the vitreous and prominent vitreous seeding extending to the posterior surface of the lens. MRI revealed that the tumor did not involve the optic nerve (Figure 1), and the physical exam was normal. The child was diagnosed with a group D unilateral retinoblastoma, according to International Classification for Intraocular Retinoblastoma. 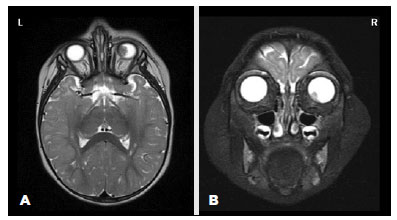 Figure 2. (A) After the first cycle of intravitreous chemotherapy (IVC) and immediately before the second IVC cycle, there was important tumor shrinkage associated with vitreous traction, nasal inferior retinal tear, and nasal retinal detachment (5 to 10 o’clock). There is partial regression of the nasal inferior main tumor with few calcified vitreous seeds close to it. Temporally to the main tumor, there is still an avascular vitreous mass with a noncalcified aspect. (B) After six cycles of IVC, the retina was reattached, and the main tumor presented a type three regression, but there were still active vitreous seeds (Figure 2B). (C) Color fundus picture 2 months after six cycles of IVC (vincristine, etoposide, and carboplatin) and seven injections of IVC (three melphalan and four topotecan).

The intravitreal injection was made 2.5-3.5 mm from the limbus at the desired meridian. Following the injection, the needle was withdrawn while simultaneous triple-freeze-thaw cryotherapy was delivered at the entry site. The eye was then carefully shaken in all directions for 30 seconds to achieve homogenous distribution throughout the entire vitreous cavity, and copious ocular surface irrigation was performed with sterile saline.

One week after the third IVM, the patient developed retinal pigment epithelial mottling in the superotemporal retina near the injection site superotemporally (Figure 3D); thus, melphalan was discontinued. At that time, a few noncalcified vitreous seeds were still present. A decision was made to resume monthly IVC and weekly intravitreal chemotherapy with topotecan 20mcg (IVT), after which there was a complete regression of apparently active vitreous seeds (Figure 2C). 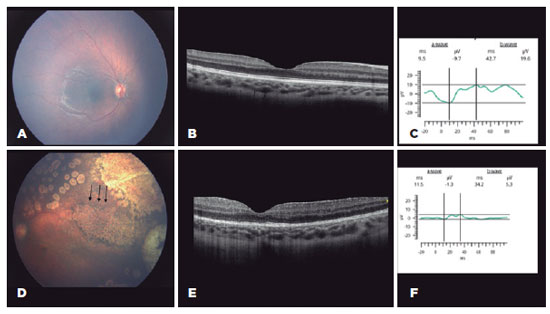 The child has been stable, showing no signs of local tumor recurrence during the 2-years follow-up.

Vitreous seeds are challengeable to control and a limiting factor in eye salvage due to its hypoxic state and the low chemotherapy diffusion into the vitreous(9).

In our case, since there was partial regression of vitreous seeds after 3 IVM when salt and pepper reti­nopathy was detected, we decided to switch from intravitreal melphalan to topotecan. A peer literature review showed that IVT is effective in treating retinoblastoma with vitreous seeds, and its concurrent use with IVM has not demonstrated retinal toxicity thus far(6).

Despite its benefits, melphalan injections can impact a patient’s visual outcome due to ocular toxicity(7,9). Melphalan toxicity is dose-dependent, where high doses can cause retinal necrosis, vascular occlusion, and neovascularization(1). Besides vascular changes, retinal damage is also due to the direct toxic effect of melphalan once in contact with the retinal surface since the vitreous tends to be thicker in childhood, and thus, the drug may be trapped by the hyaloid. The retinal pigment epithelial changes are the most common posterior segment toxicity and are generally found near the injection site with a higher drug concentration(7), as seen in this case.

A usual intravitreous dose of melphalan is between 23 and 35 mcg, and it has already been demonstrated that every 30 mcg of IVM results in 5 µV degradation on ERG, which corresponds to 5% decrease for each injection(5).

In addition to retinal functional loss, structural damage to the retina may occur. Such damage has only been demonstrated, until now, in rabbit eyes(10).

This manuscript takes a fresh, in-depth assessment of IVM retinal toxicity in humans with OCT, and its correlation with ERG changes (Figure 3E) shows that despite the preservation of the external limiting membrane, there is loss of the ellipsoid layer and external photoreceptor segment, justifying the partially abolished ERG response shown in Figure 3F.

We chose to use the light-adapted ERG protocol recommended by ISCEV to assess the retinal function. Dark-adapted ERG was not performed due to difficulty in maintaining the darkness. The test showed a decrease in amplitude responses of a- and b-waves in the affected eye (Figure 3F) compared to the contralateral one (Figure 3C). This reduction can be justified by the damage of the cones and inner retina,(11), as observed on the OCT (Figure 3E). The light-adapted 3 ERG on the affected eye showed a b-wave reduction of 72.9% in the amplitude responses.

Because the affected eye was treated with cryotherapy, IAC with melphalan, IVM, and IVT, it is unreasonable to attribute the decrease in the ERG response and OCT changes solely to IVM. It is known that cryotherapy alone leads to retinal tissue damage, and additional IAC with melphalan and IVT could have been confusing factors. However, the literature showed that IVT did not worsen ERG response,(11-13), showing no histopathologic retinal toxicity in rabbits’ model eyes(5). Besides, topotecan has a 2.5-hour intravitreal half-life after a 5-mg dose, which would not lead to accumulation during treatment(14). EPR mottling has also been found following IAC with melphalan, although in our case, this only manifested after the third IVM, which concurs with published data that recognized EPR mottling usually two months after the first IVM(15).

Therefore, it is reasonable to conclude that the OCT changes and decreased ERG response might have been related to IVM retinal toxicity in our retinoblastoma patient.

Intravitreal chemotherapy is an important therapeutic tool for eyes with retinoblastoma and vitreous seeding, and melphalan has proven to be effective in controlling the vitreous disease. However, additional studies are still needed to determine the range of drug concentration that is effective while minimizing retinal toxicity to allow salvaging vision and the eye.

This study was supported by Department of Ophthalmology, Otorhinolaryngology and Head and Neck Surgery at the Ribeirão Preto Medical School, University of São Paulo, Ribeirão Preto (SP) Brazil.