Laser trabeculoplasty modalities are noninvasive therapies aimed at reducing intraocular pressure (IOP) in patients with glaucoma. They presented mid- and long-term effects comparable with those of topical medications regarding both IOP control(1-4) and visual field progression in multicenter trials involving patients with open-angle glaucoma (OAG)(5).

Selective laser trabeculoplasty (SLT) is believed to selectively target the pigmented trabecular meshwork cells without causing thermal or collateral damage to the neighboring cells or matrix(1-3). SLT has been proven as a safe, well-tolerated, and effective therapy for IOP reduction in several types of glaucoma(3,5-12). Owing to its very short pulse duration compared with the thermal relaxation time of the local tissues, the adjacent regions do not absorb the laser energy; thus, the spread of heat damage is minimized. The significantly lower anterior chamber angle (ACA) tissue disruption than that with the argon laser allows for more SLT retreatment sessions(4-6). SLT can be considered as a primary treatment option in patients who are intolerant of or non-adherent to glaucoma medications, without interfering with the success of future surgeries(6).

In a SLT session, both the selection of the ACA region and extension of treatment are mostly decided in the discretion of glaucoma specialists rather than based on the current anatomical knowledge of the aqueous humor outflow system. Circumferential differences in the structure of Schlemm’s canal and the distribution of collector channels (CCs) have been implied in the discrepant results of minimally invasive glaucoma surgery (MIGS)(7,8). Considering the circumferential anatomical differences in the aqueous humor drainage system, the purpose of our study was to compare results between the nasal and temporal 180° SLT treatment approaches in patients with OAG.

This retrospective study included all patients with primary OAG, pigmentary glaucoma, or pseudoexfoliation glaucoma who underwent a 180° SLT treatment at the University of São Paulo Medical School (Ribeirão Preto, Brazil). The patients were >18 years of age and had no previous history of either laser treatment or intraocular surgery, except for non-complicated cataract surgery (performed >6 months before SLT). A comprehensive ophthalmological examination had been previously performed, and all the patients included in the analysis presented glaucomatous optic neuropathy defined on clinical examination, pre-SLT IOP >21 mmHg measured anytime (at least twice) with or without medication, open angles with moderate to intense trabecular pigmentation, and mild to moderate visual field defects (24-2 standard mean deviation better than the Swedish interactive thresholding algorithm standard of 12 dB). The laser procedures were performed between December 2016 and October 2018 in the patients with no adequate IOP control (low treatment compliance, substantial adverse effects with eyedrops, and at least 2 IOP measurements higher than the individualized target IOP).

The study was conducted in accordance with the tenets of the Declaration of Helsinki. Ethics approval for the use of the patients’ retrospective data was obtained from the Ribeirão Preto Clinical Hospital Ethics Committee (2019/4.048.791).

SLT was performed using LIGHTLas SLT Deux (400-μm spot size, 3-ns duration; LightMed Corporation, CA, USA) and a specific SLT lens with flange (Ocular Latina SLT with Flage, Ocular Instruments, WA, USA). The laser energy levels ranged from 0.3 to 1.2 mJ per pulse, adjusted after trabecular meshwork (TM) pigmentation in 0.1-mJ increments. If no cavitation bubble was observed at the initial energy level, the energy was increased to the lowest possible level to produce “champagne” bubbles. During the laser treatment, formation of large bubbles was monitored, and the energy level was titrated downward as necessary. For the 180° treatment, 40-50 spots were performed for the treatment of either the nasal or temporal sector.

One experienced ophthalmologist (JSP) performed the laser procedures in all the patients consecutively. The nasal (N1) or temporal (T1) sectors were first chosen in the ophthalmologist’s best discretion. The IOP measurements were scheduled in the morning hours (8:00 to 11:00 AM) during each of the following visits: at baseline (immediately before the procedure) and after treatment, that is, after 10 days, 40 days, 2 months, and 6 months. During each visit, two consecutive Goldmann applanation tonometry measurements were obtained per eye, and the average of these values were considered for the statistical analysis.

Patients who presented IOP reduction <3 mmHg between 3 and 6 months after the first SLT session, attributed as an unsuccessful result, were promptly treated again with 180° SLT in the opposite angle sector (T2 and N2). A single 0.2% brimonidine drop was applied immediately after treatment, and 1% dexamethasone was prescribed twice a day for 7 days. The patients were oriented to continue their current antiglaucomatous medication until a clinical indication for therapy reduction based on the IOP reduction was determined.

The primary outcome measured was the decrease in absolute IOP at 6-month follow-up from the last laser procedure. Continuous variables are described as mean and standard deviation. Data were analyzed using analysis of variance (ANOVA) with Bonferroni’s posttest correction. Variables with abnormal distributions were compared using nonparametric tests. Multivariate regression with mixed-effects models (adjusted for the inclusion of both eyes of the same patient) was also performed using age, diagnosis, the baseline IOP, the number of eye drops applied, and the angle sector treated as covariables. The analyses were performed using commercially available software (Stata version 14; StataCorp LP, College Station, TX). Statistical signifi­cance was defined at p<0.05. 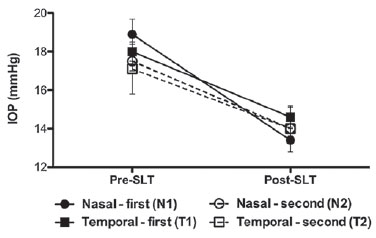 In this study, we investigated the IOP reduction obtained with two different approaches of SLT treatment in the ACA regions (i.e., nasal vs temporal 180° sectors). Notwithstanding the correlation between the baseline IOP and SLT results, when the nasal sector was the first SLT region treated (N1 approach), a significantly greater reduction in IOP was observed in this series of patients who did not present extremely high initial IOPs. To the best of our knowledge, no previous study has compared results between nasal and temporal SLT 180° approaches.

The mechanism of action of the SLT for lowering IOP is not entirely understood and is likely multifactorial.(9) Photothermolysis selectively targeting the pigmented TM cells after SLT may be the initial factor in the cascade of events culminating in the lower resistance in the aqueous humor outflow system(10,11).

A comparative study of 180° and 360° SLT approaches showed the superiority of 360° SLT treatment in reducing IOP in Japanese patients with OAG(12). This favo­rable result of 360° SLT was also described by Prasad et al., who also showed smaller IOP fluctuations up to 2 years of follow-up(13).

In a report that examined the mechanism of action of SLT in TM cells in regulating the permeability of endothelial cells in Schlemm’s canal, the cytokines released showed increased macrophage activity in the TM, which could explain the better SLT results observed with the 360° SLT treatment; that is, a more extensive area may lead to more endothelial cells producing higher levels of outflow-upregulating mediators(6).

Nevertheless, in a systematic review of the effect of SLT on IOP control, the 360° SLT approach was comparable with medical treatment, and no significant difference was found between the 360° and 180° SLT approaches(10).

Regarding the comparison between the 90° and the 180° protocols for SLT, no definitive conclusion could be derived regarding the difference in IOP reduction(14,15). Smaller ACA areas of treatment (90°) would induce both lower overall inflammatory reaction and less release of mediators, which explains the worse results in patients who underwent the 90° SLT treatment in some studies(16,17). However, such rationale did not explain the equivalent results observed in other comparative studies(12,16), which may suggest that other unknown variations in the laser techniques, such as details on the sectors of the ACA chosen for treatment, influenced the lack of significant difference between the SLT approaches(18). We speculate that the circumferential location in the ACA rather than the extension of laser treatment may impact the results of SLT. Studies involving the histological evaluation of the ACA have found higher numbers of CCs, with significantly higher mean cross-sectional CC areas, in the nasal than in the temporal region(7). CCs usually leave Schlemm’s canal diagonally or at right angles and vary in shape, size, and number (20 to 30 CCs circumferentially distributed around the globe)(7,19). By using finite element models, Martínez Sánchez et al.(20) showed that the position and opening of the CCs influenced the IOP significantly. Cha(8) observed a lower perfusion outflow resistance in the ACA sectors with expanded TM tissue and a higher number of CCs, particularly in the nasal (41.2%) and lower quadrants (31.7%) than in the temporal (14.2%) and upper quadrants (12.6%). These CC features in the nasal ACA sector might be considered as a significant factor influencing the results of MIGS(15,21-23). Moreover, an ACA expansion after SLT was recently reported in eyes successfully treated with SLT(24,25). Such ACA widening, with a probable opening of Schlemm’s canal and CCs, should be considered as an additional structural factor implicated in the SLT results.

Repeated SLT treatment has been reported to result in worse IOP reduction than the first laser treatment in cases of OAG, which might explain the worse results in N2 than in N1(9,14,15). Our choice of treating the non-overlapping sectors was then based on the results of George et al.(14), who reported better IOP results with the 180° non-overlapping repeated SLT approach. Altogether, the findings of better IOP reduction after the first rather than the later SLT sessions, the SLT ACA-widening effect, and the anatomical ACA differences, particularly the nasal CC features impacting the IOP distinctly, may help understand the better SLT results observed in our study.

Finally, consonant with earlier reports(11,14,26,27), we found a positive correlation between baseline IOP and IOP reduction(11,27,28). High baseline IOP has been shown to be a predictor of SLT success, even in patients with normotensive glaucoma(9).

Even considering the significant results observed, we must recognize that our study has limitations such as the relatively small sample size, the inclusion of both phakic and pseudophakic patients and only two treatment-naive patients, the short follow-up period, the retrospective design, the absence of comparator groups with results from eyes treated with either eye drops or the 360° approach, and the lack of information on the individual distribution of CCs among the treated eyes.

Despite these limitations, our results showed that the 180° SLT performed initially in the nasal sector was associated with higher IOP reduction than the temporal sector laser approach. Considering all the sectorial diffe­rences in the circumferential aqueous humor outflow system(21,22), further prospective randomized clinical trials are warranted to assess our findings and evaluate the use of aqueous angiography imaging prior to MIGS and SLT. Ultimately, customization of the ACA for SLT, as currently proposed for MIGS, could improve IOP-related outcomes when coupled with imaging of the outflow pathways.