Purpose: To evaluate the stability and efficacy of the double-flanged 5-0 polypropylene suture to fixate subluxated cataracts at 18 months and the possible complications of this new technique.
Methods: This technique uses a 5-0 polypropylene monofilament to create two flanges with a thermocautery, for fixation of a capsular tension segment to the sclera to fix the subluxated capsular bag. This technique was implemented in 17 eyes requiring intraocular lens implantation in a setting of zonular dialysis due to trauma, Marfan syndrome, microspherophakia, idiopathic disease, and post-phacoemulsification status.
Results: Follow-up of the patients occurred at 18 months. Best-corrected visual acuity improved significantly from 0.85 to 0.39 (logMAR), whereas the spherical and cylindrical refractive errors and intraocular pressure remained stable from preoperation. No suture photodegradation or pseudophacodonesis were detected.
Conclusion: The double-flanged 5-0 polypropylene suture transscleral bag fixation technique has shown favorable long-term outcomes in terms of bag intraocular lens/complex fixation and stability. In eyes with zonular weakness or dialysis, this technique appears to be a safe and knotless option for cataract surgery.

​Surgical treatment of subluxated cataracts is a challenging task, even for experienced anterior segment surgeons. The choice of technique and devices depends on the degree of zonulopathy and the pathophysiologic origin of the zonular abnormality(1).

In cases in which the zonular dialysis is less than 120°, a standard capsular tension ring (CTR) is commonly used. However, in cases with more extensive zonular laxity and progressive pathologies such as pseudoexfoliation, Marfan syndrome, Weill–Marchesani syndrome, and deficiency of sulfite oxidase, in which subluxation can worsen with time, fixation of the capsular bag in the sclera with a modified CTR or a capsular tension segment (CTS) is recommended(1-4).

Although scleral fixation is a well-known and reproducible technique, it requires a high degree of surgical skill and expertise; it also increases surgical time. Furthermore, polypropylene 10-0 has been shown to hydrolyze within 5 to 10 years; thus, scleral fixations are subject to suture degradation, pseudophacodonesis, and late intraocular lens (IOL) decentration(5-7).

To overcome these challenges, we became interested in using a thicker monofilament combined with a flanged technique. In 2017, we described a knotless, double-flanged technique using a 5-0 polypropylene suture(8) (Ethicon Johnson, USA). In 2020, we proposed the use of this modified technique for fixating the capsular bag in patients with ectopia lentis(9).

Since we published the first report of double-flanged polypropylene suture in 2017(8), many techniques have been reported using this new kind of suture, including how to fixate a single-piece IOL(9), a foldable IOL, iris(10), and artificial iris. However, the medium- to long-term stability of this technique has yet to be evaluated. Thus, in this paper, we present the 18-month data of our double-flanged transscleral bag fixation technique using a 5-0 polypropylene suture for fixing the CTS to the sclera in patients with zonular dialysis >120º.

This prospective case series is composed of 17 eyes of 17 patients with zonular dialysis >120o who required IOL implantation in the setting of zonular dialysis due to trauma (six eyes), Marfan syndrome (three eyes), microspherophakia (two eyes), idiopathic disease (two eyes), post-phacoemulsification status (four eyes), or eyes that have previously undergone cataract surgery and that evolved with IOL bag dislocation, thus requiring a second surgery for IOL implantation and bag centration (see Tables 1 and 2 for population characterization). In patients with zonular dialysis >180o, such as those with microspherophakia, we used two CTSs to fixate the capsular bag.

To rule out systemic syndromes associated with ectopia lentis, a detailed systemic examination was also included as part of the preoperative examination.

All procedures were performed by the same surgeon (S.C.) between October 2017 and November 2019. Ethical committee approval for the study was obtained by the authors from Plataforma Brazil (No. CAAE 69382517.6.00005138 submitted May 11, 2017, Santa Casa de Belo Horizonte), and the study followed the tenets of the Declaration of Helsinki. All patients were asked to sign an informed consent form before treatment.

Measurement of visual acuity was recorded in Snellen and then converted to logMAR for statistical analysis. Follow-up was scheduled at 1, 3, 6, 12, and 18 months. We report the results at 18 months postoperatively.

We have previously described in detail the double-flanged polypropylene technique(8). In summary, using a 26-gauge needle, we make a scleral tunnel in the same quadrant of the zonular weakness. A well-angulated tunnel can be created by making the tunnel as parallel as possible and about 2.0 mm from the limbus.

When the needle is in the anterior chamber, we use 23-gauge micro-forceps through the corneal incision to place a 5-0 polypropylene monofilament into the 26-gauge inner cavity of the needle (Figures 1A and 2A). Next, the needle externally guides the suture end within the sclera (Figures 1B and 2B), and we pass an adjustable 5.0 polypropylene suture through the anterior chamber: one end out of the corneal incision and the other end out of the sclera. 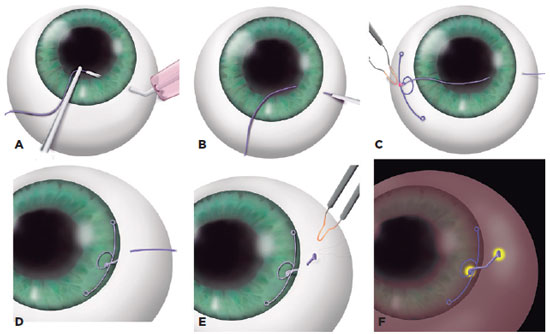 The external cornea side of the 5-0 suture is placed in the suturing eyelet of the CTS (Figure 3A), heated, and shaped into a flange using a bipolar portable cautery outside the eye (Figures 1C, 2C, and 3B) to make the first flange. After this procedure, the CTS/5-0 monofilament complex is created. Subsequently, the CTS is placed in the same quadrant of the zonular weakness (Figures 1D and 2D).

Finally, the external scleral side of the monofilament is cut to approximately 2 mm to adjust the size and to place the CTS in a better position. The monofilament is then heated and shaped into a second flange using the same bipolar portable cautery (Figures 1E and 2E).

Next, this second flange is inserted into the scleral tunnel (Figures 1F and 2F) using McPherson forceps (Sklar, West Chester, PA, USA). The IOL is in the bag (Figure 4). 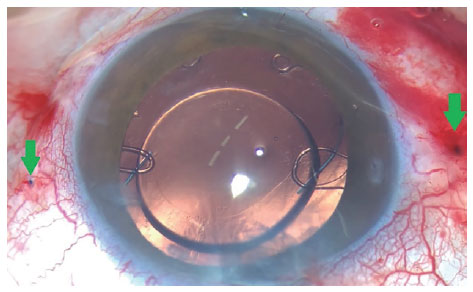 Figure 4. A case of microspherophakia with two CTSs fixated at the sclera using the double-flanged technique on both sides and the IOL implanted in the bag. 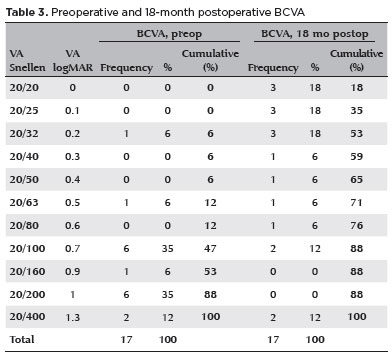 We observed no scleral degradation or polypropylene suture degradation. To observe the complex CTS-IOL positions inside the eye, we performed ultrasound biomicroscopy in all eyes at 18 months postoperatively using the UBM Plus (Accutome, Keeler and Microsurgical Technology, USA). The ultrasound biomicroscopy images (Figure 5) showed that the 5-0 polypropylene suture did not touch the ciliary body.

Figure 5. Ultrasound biomicroscopy (UBM) image showing the IOL in the right position. The numbers 1 and 2 show the capsular tension segments in a patient with microspherophakia.

We recorded some complications, including blebitis and glaucoma in one case, tractional retinal detachment after 12 months in one case, and contraction capsular syndrome in one case. In one case, one flange touched the posterior section of the iris, as the scleral tunnel was made less than 2 mm from the limbus. This case did not experience any clinical complications.

There was one case of flanged extrusion in the long external polypropylene suture. Thus, it was necessary to return the patient to the operating room and reduce the flange and length of the external polypropylene (Figure 6). In addition, although in our previous four-flanged scleral fixation study(9) we found patients with conjunctival erosion, we did not encounter any conjunctival or scleral erosion in this case series. One case had a limited vitreous hemorrhage while creating the scleral tunnel. Of 17 eyes, 15 IOLs were stable at 18 months and two were slightly decentered. No uveitis was observed.

The management of congenitally dislocated cataracts in such syndromic cases has traditionally consisted of intracapsular cataract extraction and pars plana vitrectomy/lensectomy, but the large incision required for intracapsular cataract extraction induces significant postoperative corneal edema and astigmatism, and lensectomy often results in the requirement of aphakia glasses or aphakia contact lenses(11).

If the subluxation is less than 120°, a conventional CTR is usually satisfactory for managing weakness. Instead, when the eyes present a weakness greater than 120° or zonular dialysis, centering and fixing the bag to the sclera may be required for satisfactory long-term stability(12,13). Since Hara et al first presented the standard CTR(14) in 1991, several authors have proposed different strategies that adapt the CTR to treat zonular dialysis(15-17).

Traditionally, these solutions use a polypropylene 10-0 suture to anchor the bag to the sclera. Polytetrafluoroethylene (Gore-Tex) is used for the same purpose because of its longer lifetime(18). However, the published literature has shown that 10-0 polypropylene sutures may degrade over time and, in the long term, result in dislocation of the IOL(13-15).

Our first experience coupling this technique and the thicker monofilament was described in our 2017 study(8). We continued using this technique for years, and its versatility was confirmed in 2020 when our group described in several studies the use of a 5-0 polypropylene to fixate a single-piece PMMA IOL in the sclera(9). Other ophthalmology uses of a thicker monofilament have been reported by Kusaka(21), who used a 6-0 monofilament to fixate iridodialysis, and by our group when we used a four-flanged technique to fixate a four-eyelets IOL to the sclera(22).

We confirmed that at 18 months after surgery, the flange bag-CTS complex weas stable and there was no scleral degradation in any of the 17 eyes with subluxated IOL that underwent surgery with this technique.

We recorded a few complications, including blebitis and glaucoma in one case. One patient previously had glaucoma, which was manageable with drops, and had a bag disinsertion during a previous phacoemulsification and then we proceeded with the double-flanged technique. In addition, the IOP increased, and it was necessary to perform trabeculectomy. Blebitis occurred 30 days later.

Other complications include tractional retinal detachment after 12 months in another case and contraction capsular syndrome in one case. Infection did not occur in any of the cases.The BCVA increased significantly over 18 months: a gain of 0.49 logMAR, which was superior to the 0.13 logMAR gain of the Yamane(20) study at 24 months, despite the difference in preoperative values and the fact that the different techniques used made it difficult to establish a significant comparison. In 2011, Chee(23) reported a noncomparative case series using a CTS with a 10.0 propylene suture: of 41 eyes, 22% had at least 20/40 Snellen preoperatively as compared with 94% at 12 months postoperatively, but it must be taken into account that much fewer eyes (only 18 of 41) were recorded at that follow-up. In our study, only 6% had a preoperative BCVA better than 20/40, but this figure was 59% at 18 months; all eyes examined preoperatively were recorded postoperatively.

Five patients had a postoperative BCVA that was worse than 20/80: three patients previously had ocular trauma and multiple procedures (retinal detachment, choroid thickening, epiretinal membrane), one patient previously had idiopathic uveitis, and one had multiple procedures after previous ocular trauma. The specific cause of the limited gain in BCVA after surgery was not determined. However, the refractive and IOP parameters remained stable.

The long-term results of the double-flanged 5-0 polypropylene transscleral bag fixation technique were comparable with those of traditional suture-held CTSs but does not require flaps, sutures, or glue. Equally, this technique is less traumatic for the ocular tissue, it is performed much faster, and it is easier to learn. Moreover, because this method uses a thicker monofilament and may prevent suture degradation, it may also avoid traditional complications of IOL misalignment or dislocation over time.

The greatest limitation of this study is the small number of patients operated on using this technique. Although we attained a follow-up period of at least 18 months, a larger number of eyes are preferable to achieve more conclusive results. A larger sample size also means that other complications can be identified. Furthermore, because of the specific nature of this technique, most eyes examined in this study were from patients between 60 and 69 years of age. Ideally, a more balanced population is preferred.

Overall, the double-flanged 5-0 polypropylene suture transscleral bag fixation technique has shown satisfactory long-term outcomes for IOL fixation and stability, and it appears to be a safe, knotless option for cataract surgery in eyes with zonular weakness or dialysis. However, to establish the exact outcomes with zonular weakness of different etiologies, further studies that include a larger number of patients and longer follow-up times are needed.

Giorgio Pirazzini assisted with the editing and preparation of the manuscript.

Disclosure of potential conflicts of interest: Sergio Canabrava filed a patent in PCT. The other authors declare that there is no conflict of interest