PURPOSE: To compare the severity and laterality of keratoconus according to allergic rhinitis, scratching and sleeping habits, and manual dexterity.
METHODS: Objective assessments regarding allergic rhinitis, eye itching, and sleeping position among patients with keratoconus (diagnosed based on corneal tomography) were conducted. Diagnostic criteria and classification were based on the Amsler-Krumeich classification.
RESULTS: Ocular pruritus was reported by 29 of 34 participants (85.29%). Eighteen participants (62.07%) reported equal scratching of both eyes, six (20.69%) more on the right eye, and five (17.24%) more on the left eye. Comparison of the main sleeping position and the eye with more severe presentation of the disease using Fisher’s exact test revealed some correlations (0.567 and 0.568 in the right and left eye, respectively). However, these correlations were not statistically significant.
CONCLUSIONS: The association between higher keratometry values and sleeping position appears to be more significant than that reported between keratometry and itching, or manual dexterity.

Keratoconus is the most common ectasic corneal disease. It is a noninflammatory disease characterized by a focal thinning of the cornea with increased corneal curvature due to the reduced biomechanical strength of the corneal collagen fibers. This condition ultimately leads to decreased visual acuity. Keratoconus is a progressive disease, especially in the first decade of life when the cornea exhibits less rigidity(1-6). Although asymmetric, the disease is bilateral(7). In a review of genetic studies, the majority of keratoconus in families present an autosomal-dominant inheritance pattern with a known genomic loci(1).

The prevalence of keratoconus in the general population is approximately 1 in 2,000 individuals (0.05%)(7). Its etiology is multifactorial, combining environmental, genetic, and behavioral factors. Of note, its distribution differs worldwide; countries with less sun exposure have a lower prevalence than those with greater exposure(1-6). However, it is thought that the higher prevalence may be attributed to ethnic and behavioral characteristics rather than direct sun exposure. However, the association between atopy and the act of eye rubbing has been established as a trigger for the disease development and progression. In numerous studies, half of the participants with keratoconus reported that they rub their eyes, although these findings are variable in the literature. Other influential factors are the frequency and intensity of eye rubbing(8-11).

Microtrauma caused in the epithelium through the friction of the corneas generates high levels of matrix metalloproteinases (MMPs) (i.e., MMP-1 and MMP-13) and inflammatory mediators, including interleukin-6 (IL-6) and tumor necrosis factor-5 (TNF-5). The release of these factors is part of the processes that lead to the manifestation and progression of the disease. These processes include apoptosis of keratocytes as a result of the increased levels of IL-1 with subsequent loss of stromal volume(5,8).

Other factors, such as ethnicity, geographic location (possible exposure to ultraviolet radiation), and socioeconomic factors, are controversial(1-4). Associations between keratoconus and other conditions, such as floppy eyelid syndrome (FES) and obstructive sleep apnea, were described in some studies presented at the Association for Research in Vision and Ophthalmology Meeting in 2012(12,13). The strongest association was found with FES compared with sleep apnea. This finding could be due to the fact that the compression of eyes on the pillow may be sufficiently strong, leading to changes in the palpebral tarsus structure and keratoconus development(12,13).

The purpose of this study was to verify the relationship between the severity of keratoconus, eye rubbing, sleeping habits, manual dexterity and allergic rhinitis.

This was a non-interventional comparative case series, conducted between May 2015 and July 2016 in the Department of Ophthalmology and Visual Sciences of the Federal University of São Paulo (São Paulo, Brazil). The study included individuals with keratoconus who were candidates for intrastromal corneal ring surgery. The study was approved by the Institutional Review Board (number: 1.636.206) and followed the tenets of the Declaration of Helsinki. All patients provided written informed consent.

Individuals with documented keratoconus were enrolled. The exclusion criteria were any previous ocular surgery, pregnancy or breastfeeding, presence of corneal degenerations (except keratoconus), and other ocular diseases that could influence the ocular examination. Individuals with major comorbidities, such as diabetes and collagen-related diseases, were also excluded.

An examiner asked the participants objective questions regarding allergic rhinitis, eye rubbing, manual dexterity, and sleeping position. Another examiner collected the corneal tomography data of both eyes. We used the simulated central keratometry data of each eye, maximum keratometry (Kmax) in each eye, and Amsler-Krumeich classification for the analysis.

Table 1 presents the main characteristics of the study participants. The presence of allergic rhinitis and ocular itching was reported in 26 (76.5%) and 29 (85.3%) participants, respectively. All participants with allergic rhinitis reported ocular pruritus. Regarding the preferred rubbing eye, the distribution among the right, left, and both sides was similar. Almost half of the participants were unsure of their preferred eye. When asked, 14 participants (41.2%) responded that they sleep most of the time on the right side, and 25 (73.5%) confirmed that they wake up in a position different from their initial sleeping position. 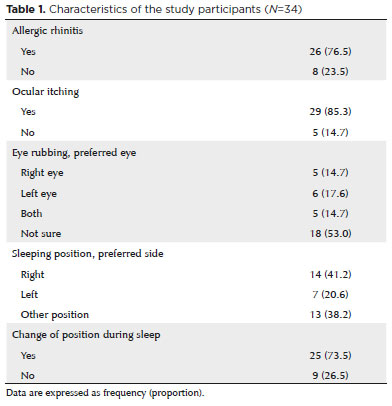 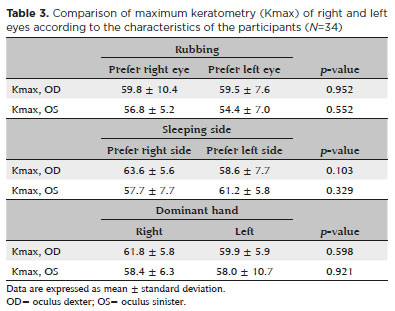 In an investigation including only individuals with clinical unilateral keratoconus, the authors observed a tendency for patients to sleep on the same side with the eye that is most severely affected or the eye with a progressing disease. Some of these patients slept with their hand or fist positioned directly against their eyelid and were more likely to hug their pillow in a manner that caused compression around their eyes(14).

A study investigating the sleeping position through lisamine green staining demonstrated a difference between back sleeping and left-side sleeping (analysis of variance, p=0.005). The Ocular Surface Disease Index score was also increased in patients who slept on their right or left side (36.4 and 34.1, respectively) as opposed to those who sleep on their back (26.7) (p=0.05). There was no statistically significant correlation between the sleeping position and degree of meibomian gland dysfunction(15). In a Japanese study, poor sleep quality was associated with dry eye disease, especially dry eye symptoms(16,17).

Normal eyelid closure has also been linked to the development of several ocular surface disorders. Sleep disorders are common; obstructive sleep apnea (the most common disorder) is associated with a number of serious systemic diseases and several eye disorders, including FES, optic neuropathy, glaucoma, anterior ischemic optic neuropathy, and papilledema secondary to increased intracranial pressure. At the onset of sleep, the lids are closed, and the position of the globes, as judged by the position of the cornea behind the closed lids, is generally elevated. Lagophthalmos may cause corneal exposure that results in pain and foreign body sensation upon waking(18,19). These effects could induce eye rubbing.

In a study investigating the association between corneal curvature and eye itching severity, it was verified that the most curved corneas were present in the eyes with more frequent and intense pruritus(21). A series of cases also verified the asymmetric expression of keratoconus and found that individuals habitually rubbed the most affected eye(21-23).

Recently, an increasing body of evidence suggests that inflammatory pathways may play a significant role in the development of keratoconus. Several studies have investigated the role of proteolytic enzymes, such as MMPs, in keratoconus. MMPs are involved in the degradation of the extracellular matrix or activation of cellular apoptosis(25). In the human cornea, MMPs are secreted by epithelial cells, stromal cells, and neutrophils(26). In keratoconus, the cornea expresses increased levels of MMP-117 and MMP-13(27). The tear analysis in keratoconus has revealed increased levels of MMP-1, MMP-3, MMP-7, and MMP-13(28). Increased gelatinolytic and collagenolytic activities have also been reported in the cornea(29-31) and tear film of patients with keratoconus(28).

MMP-9 activity is also high in the tear fluid of patients with keratoconus. Hence, the increase in MMP-9 levels is correlated with corneal thinning, probably as a result of stromal collagen degradation(28). In addition, TNF-α disrupts the barrier function of corneal epithelial cells. The type of cell from which the production of TNF-α in keratoconus originates remains unknown. However, TNF-α can be produced by a variety of cells, including all three major cell types in the cornea: the corneal epithelium, stromal keratocytes, and endothelial cells. Perhaps, corneal damage induced by environmental factors causes the production of TNF-α. For example, eye rubbing and dry eye disease are major risk factors for developing KC and are associated with the induction of TNF-α production by corneal epithelial cells(32-34).

The exact mechanism through which keratoconus worsens due to the mechanical trauma caused by eye rubbing or scratching has not yet been elucidated. It has been proposed that IL-1 plays a major role in this process. Wilson et al. suggested that the increased expression of the IL-1 receptor sensitizes the keratocytes to IL-1 released from the epithelium or endothelium. This effect causes loss of keratocytes through apoptosis and a decrease in stromal mass over time. This hypothesis supports that the occurrence of keratoconus is related to eye rubbing, use of contact lenses, and atopy, presuming that epithelial microtrauma leads to an increased release of IL-1 from the epithelium(35,36).

Our study had some limitations. First, this study may have not been statistically powered to detect associations due to the small sample size. Second, characteristics, such as eye rubbing and sleeping side, were reported by the participants without a more objective assessment. However, our findings support the importance of allergy control and eye trauma avoidance among those at risk of developing keratoconus.

In conclusion, our study revealed a tendency of the eyes with most advanced degrees of keratoconus to be associated with allergy, eye rubbing, and preferred sleeping side.

14. Carlson AN. Keratoconus: time to rewrite the textbooks. Rev Ophthalmol [Internet] 2009 [cited 2019 May 21];16:66. Available from: https://www.reviewofophthalmology.com/article/keratoconus-time-to-rewrite-the-textbooks