Purpose: This study aimed to describe the visits profile to Hospital São Paulo’s ophthalmology emergency department, a 24-hour public open-access tertiary-care service in São Paulo, Brazil, that belongs to Federal University of São Paulo, over the last 11 years.
Methods: A cross-sectional retrospective study was conducted, including all patients (n=634,726) admitted to the ophthalmology emergency department of Hospital São Paulo between January 2009 and December 2019.
Results: From 2009 to 2019, the number of patients’ presentations increased to 39.2%, with considerable visits variation across the period. The median age was 38 ± 20.4 years. Males represented 53.3%, and single-visit patients represented 53.1%. A total of 79.5% of patients’ presentations occurred from 7 am to 5 pm, and 80.8% of patients’ presentations occurred during regular weekdays. The most frequent diagnoses were conjunctivitis, blepharitis, keratitis, hordeolum/chalazion, and corneal foreign body.
Conclusions: Over the study period, presentations significantly increased in number, with nonurgent visits predominance, and a low number of single-visit patients. Our results demonstrate the ophthalmic visits profile and can lead to changes in the public health system to improve the quality of care and ophthalmology emergency access in São Paulo city.

Emergency departments (EDs) are an essential part of patient care, with the unique capability to provide 24-hour full-range immediate medical services(1). Conditions that require urgent ocular care, such as ocular trauma, infections, retinal detachment, and uveitis, are associated with a high risk of visual impairment if they do not receive appropriate treatment(2). Despite representing a small body surface, the eyes are the third most frequent organ, after hands and feet, affected by injuries(3). Besides, vision is an essential overall health quality aspect, and vision loss is a significant risk factor for functional decline(4).

However, crowding ophthalmology EDs is a real situation in most countries(1,3,5), leading to delayed and low-quality care for real urgent cases. Nonurgent visits, such as those for glass prescription, dry eye syndrome, blepharitis, and chalazion, have been reported between 8% and 62% of total patients’ visits(6), especially at self-referral services.

The high number of nonurgent visits to EDs is an issue described in previous studies, and it is probably a significant aspect of crowding in waiting rooms and delay in medical care. In Brazil, we have another important factor, as the majority of the population depends only on our public health system (SUS-Sistema Único de Saúde) to access health care, which is universally accessible and free. SUS is divided into three care complexity levels (primary, secondary, and tertiary care) that should work as an integrated network to organize patient access from primary care to the other levels(7).

Many patients seek ED attendance for nonurgent complaints, probably because of lacking information and facing difficulties in accessing ophthalmological assistance in primary care(6). For years, the challenges in access to care could make originally nonurgent cases arrive at the emergency room with an advanced disease phase having a poor prognosis and demanding an urgent intervention, such as in cases of glaucoma and diabetic retinopathy.

There are few studies on ophthalmology ED visits profiles in Brazilian hospitals, especially assessing trends from the last 5 years. Only a few studies in the world analyzed abundant data from ophthalmology visits.The Universidade Federal de São Paulo (UNIFESP) ophthalmology ED is linked to Hospital São Paulo, a tertiary-care 24-hour public open-access hospital located in São Paulo, which belongs to UNIFESP. Despite high visits volume, there is no ophthalmological triage system in the hospital. In addition to healthcare purposes, it can offer education for residents in training.

This study aimed to evaluate the visits profile to UNIFESP ED over the last 10 years, evaluating the causes for the change in inflow and possible proposals to improve the service flow.

A cross-sectional retrospective study was conducted based on data analysis from all patients admitted to the ophthalmology ED of Hospital São Paulo from January 2009 to December 2019.

This study was approved by the Institutional Ethics Committee of UNIFESP and followed Helsinki principles.

The data were collected from the electronic medical records available in the hospital database. The following data that coordinates from ED medical charts were retrieved by the hospital information technology specialists: patient-internal registration code, date and hour, age at the visit, sex, informed zip code, and ICD-10 (International Classification of Diseases-10), as informed by the physician. ICD-10 chapter 7 (“Diseases of the eye and adnexa”, codes H00-H59) and chapter 19 (“Injury, poisoning and certain other consequences of external causes”, codes S00-T88) were used.

Retrieved data were compiled in an anonymized spreadsheet for subsequent statistical analysis.

Initially, all patients were considered for statistical analysis. In postanalysis, we excluded patients without identifiable diagnoses and completed medical care records. 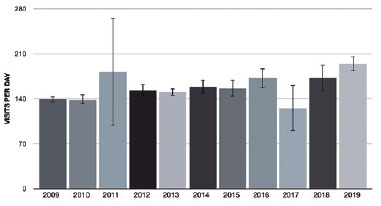 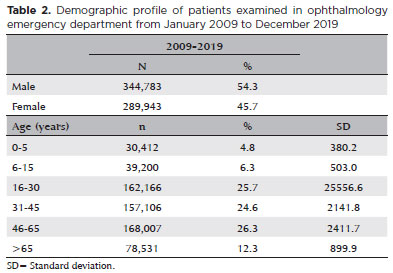 The visits showed substantial variation when comparing regular weekdays and weekends, a variation that was a common pattern over the years. Regular weekday visits represented 80.8% ± 1.4% while analyzing the entire study period, with the lowest percentage of 79.7% in 2019 and the highest percentage of 82.6% of 2011. Visits on Mondays corresponded to 18.2% ± 0.6%, and those on Sundays corresponded to only 7.8% ± 0.5%. Inflow rates tended to progressively reduce from Monday to Friday (Table 3). 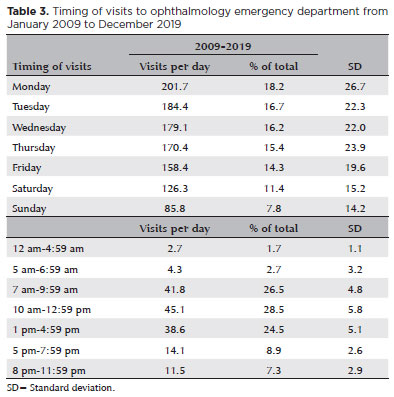 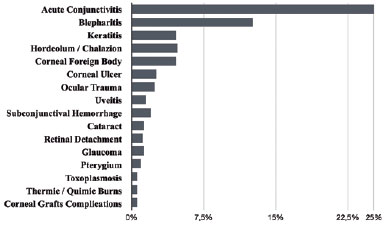 Emergency consultation is essential to properly manage urgent health problems, such as ocular trauma, uveitis, infections, and retina detachments(2). However, it provides quick access to ophthalmological evaluation, specifically in the Brazilian health system. Since adequate ophthalmological covering and populational orientation are lacking, crowded EDs are a real issue in Brazil. The number of public ophthalmology EDs in São Paulo has decreased or limited its access over the last years, which could also explain the increased crowding of our service.

The increase of 19,854 (+39.2%) visits from 2009 (50,729) to 2019 (70,623) is a significant change in inflow, representing more visits than many previous studies showed per year(7-10). This can be explained by the improvement of hospital accessibility and public transport around our ED, such as with the construction of a subway station close to the hospital in 2018. Other explanations include the closure of some public open-access ophthalmology EDs in São Paulo and the reduced access to private health systems in the Brazilian population(11). Our assistance area covers a 5-million population area in the South Zone of São Paulo but our daily experience shows that many patients come from other zones or even from other federative units in Brazil, and a future analysis based on patient origin is required for a better understanding of the underlying reasons of this phenomenon.

São Paulo experienced an acute conjunctivitis epidemic, which corresponds to the abruptly increased inflow during the first semester in 2011(12). UNIFESP ED was not completely open for visits during the second quarter of 2017, which explains the decreased inflow.

The comparison with previous Brazilian studies shows different situations in cities in Brazil and the lack of recent studies for comparison. We believe that the increase in volume and a high number of nonurgent visits are an issue in most Brazilian public ophthalmological services.

The increase of 39.2% found in our analysis is higher compared to previous studies from other countries. A previous study compared the change in eye-related trends to their ED in Beirut, Lebanon, from 1997 to 2012, finding a less significant increase in the inflow of 39,158 to 46,363 (+ 18%) during a 15-years period(13). Another similar study found an increase in the inflow of 11% from 2001 to 2014 based on data analysis from more than 11 million visits in the mentioned period in the United States(14). Comparing profiles by seasonal distribution, 27,120 visits were evaluated in 2013 at Turkey ophthalmology ED(1).

The ophthalmic coverage and access in our area have been decreasing over the years, and patients have tried to use the ED service as a triage service. However, this does not represent an appropriate counter-referral system that could accept those patients after visiting the ED. Urgent cases are mostly accepted by UNIFESP Ambulatory Eye Clinics, when possible.

The low proportion of single-visit patients of only 53.1% (336,704), considering the entire study period, could be explained by representations from outpatient care UNIFESP Ambulatory Eye Clinics and a low success rate to follow up after initial ED consultation as initial healthcare service, necessitating more than one ED consultation.

Provided the lack of a well-established triaging system in ophthalmology, it becomes even harder to manage the high volume of patients every day in ED. Rome Eye Scoring System for Urgency and Emergency (RESCUE) was proposed by Rossi in 2007 and tried to establish a tested and effective way to triage ophthalmology patients(18,19). It could be a way to apply a triaging system to our service, possibly adapting it to our reality.

A previous study in Wilmer Eye Institute (Baltimore, USA) found that allowing same-day access to ambulatory ophthalmology clinics decreases costs to the healthcare system and volume to ED(5). Overcrowded EDs result in decreased patient satisfaction and increased physicians’ burnout, which is even more expensive for the healthcare system, an important aspect for a public system like SUS in Brazil. Stagg et al. agreed that facilitating clinics access is potentially the most effective way to manage nonurgent cases out of emergency care(14).

Our study has several limitations. Our data lack information on examination findings. Also, ICD-10 was provided by many different doctors and during different training stages, potentially resulting in misdiagnosis. The long period and a large amount of data included for analysis increase biases and possible errors in data that could not be checked. Despite the risk of bias, large data analysis, such as our study, can give a better understanding of the global change in our ED profile over the years, allowing appropriate adjustments to improve the quality of provided service.

In conclusion, overcrowded EDs are a real issue in Brazil, with a visits increase of 39.2% from 2009 to 2019 in UNIFESP ED. The hypothesis is that the reduction in emergency services in São Paulo city and inappropriate use of emergency services led to this problem. Solutions would comprise a triage system of urgent cases, remodeling the healthcare system to facilitate access to ambulatory clinics, and educational programs.