Staphylococcus hominis: a rare cause of endophthalmitis

A 60-year-old female patient presented with the best-corrected visual acuity (BCVA) of counting fingers (CF) at 30 cm with tractional retinal detachment (TRD) in her left eye. Medical history revealed that the patient had insulin-dependent diabetes mellitus (DM) and chronic renal failure for five years. She was previously treated with bilateral pan-retinal photocoagulation for proliferative diabetic retinopathy. For TRD, we planned pars plana vitrectomy (PPV) with intravitreal bevacizumab (IVB) injection three days before the surgery. However, two days after the IVB injection, the patient presented with decreased vision, epiphora, severe pain, and photophobia. Her BCVA was CF at 15 cm with corneal edema, hypopyon (0.7 mm), and dense vitritis in the affected eye. The patient was diagnosed with postinjection endophthalmitis. Samples were taken from aqueous (0.1 ml) and vitreous (0.2 ml) fluids and sent to microbial culture, and simultaneous intravitreal antibiotic (1 mg/0.1 ml vancomycin and 2.25 mg/0.1 ml ceftazidime) injection was administered. Direct microscopy with Gram staining of the aqueous and vitreous specimens showed gram-positive cocci (Figure 1), and methicillin-sensitive Staphylococcus hominis (S. hominis) grew in the cultures of both specimens (Table 1). Twelve hours after intravitreal antibiotic injection, the patient’s BCVA dropped to hand motion (HM), and urgent PPV was performed with total vitreous removal, separation of tractions as much as possible, and 5000 cst silicone oil (SiO; Teknomek®, Istanbul, Turkey) tamponade. After SiO injection, ten times diluted vancomycin (0.1 mg/ 0.1 ml) was administered. 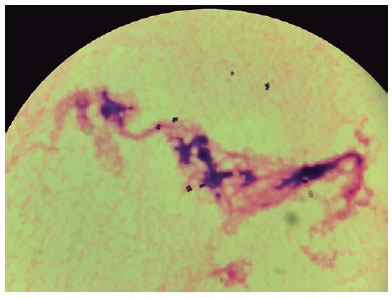 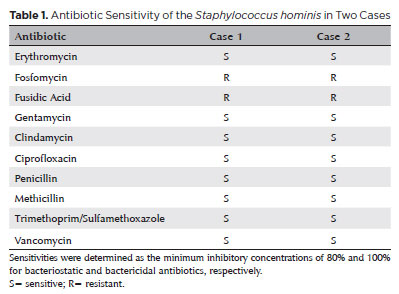 One week after the PPV, the BCVA was HM with mild anterior chamber inflammation and intraocular pressure (IOP) of 8 mmHg. At 6 months postoperatively, the BCVA was preserved as HM with an IOP of 6 mmHg under SiO. There was no recurrence of intraocular infection.

An 86-year-old male patient was admitted to our clinic with a gradual decrease of vision and pain after an injury from a bush in his eye 1.5 months ago. The left eye examination revealed BCVA of light perception, 1 × 1 mm corneal scar, 3 + anterior chamber cell, rubeosis iridis, dense corticonuclear cataract, and IOP of 4 mmHg. Dense vitreous condensation was evident on B-scan ultrasonography, and orbital computed tomography showed no foreign body. Urgent PPV with phacoemulsification was planned, suspecting endophthalmitis secondary to penetrating trauma. A tiny anterior capsular tear topographically matching with the corneal scar was noticed during surgery, revealing the cause of the cataract and confirming our diagnosis. Therefore, aqueous and vitreous samples were taken and sent for culture. PPV was completed with 5000 cst SiO (Teknomek®, Istanbul, Turkey) tamponade and intravitreal ten times diluted antibiotic injections (0.1 mg/0.1 ml vancomycin and 0.225 mg/0.1 ml ceftazidime). Although direct microscopy with Gram staining showed no mi­croorganisms, methicillin-sensitive S. hominis grew in both vitreous and aqueous cultures (Table 1). At 6 months postoperatively, the patient’s BCVA was 20/400 with an IOP of 9 mmHg under SiO. The patient was scheduled for SiO removal.

Biofilm production is one of the main reasons why bacteria in the ocular flora gain virulence(7). With this ability, they can adhere to abiotic (e.g., needles) or biotic (e.g., conjunctiva) surfaces(7). In a study investigating the potential sources of bacterial contamination during intravitreal injections, although the subgroup analysis was not mentioned, CoNS was the most frequently isolated bacteria in the cultures(8). A recent study using culture-dependent and culture-independent approaches found a wide variety of bacteria on intravitreal needles.(9) In this study, 5 of the 18 needles (28%) sent to culture were culture-positive, and one of the three microorganisms causing culture-positivity was S. hominis(9).

For CoNS, the rate of biofilm production in the conjunctiva of patients with DM is 30% compared to 10% in patients without DM(7). Also, biofilm production is associated with antibiotic resistance(7). In a recent study, the highest vancomycin resistance rate from biofilm-positive samples was found to belong to S. hominis isolates(7). In previously reported S. hominis endophthalmitis cases, the microorganism was resistant to vancomycin, ciprofloxacin, moxifloxacin, and cefazolin in the case of acute endophthalmitis after cataract surgery(4), and penicillin in the case of delayed-onset endophthalmitis(6). Antibiotic susceptibility testing was not mentioned in the other two published cases(3,5). Fortunately, considering our reported patients, isolated S. hominis was sensitive to vancomycin, so the infection was not refractory to treatment.

CoNS are well-known pathogens of post-traumatic endophthalmitis, and Staphylococcus epidermidis and Staphylococcus saprophyticus were the prevailing microorganisms in this group(10). There is one reported case of chronic S. hominis endophthalmitis in the literature 14 months after the initial trauma with an unre­cognized intralenticular foreign body(5). Like in that case, in our second case, after an undiagnosed penetrating trauma with anterior capsule rupture, chronic endophthalmitis may have developed as a result of the inoculation of S. hominis into the avascular lens where it was sequestered and gained virulence. This may explain why there was no acute endophthalmitis manifestation in both cases since there was no direct inoculation of microorganisms into the vitreous.

Informed consent was obtained from all patients included in this study