There are two major groups of microinvasive glaucoma surgery (MIGS) techniques, i.e., those aiming to achieve rehabilitation of the natural aqueous outflow pathway (trabecular ablation, trabecular bypass, or Schlemm’s canal dilation) and those creating an artificial drainage pathway (subconjunctival or suprachoroidal drainage techniques), which should be reserved for eyes where the natural trabecular outflow system is no longer viable(1-4).

The earlier the glaucoma stage is, the greater is the probability of a viable and functional posttrabecular outflow system(4-6). Eyes that show a good response to intraocular pressure (IOP)-lowering medications or selective laser trabeculoplasty tend to have better viability of the natural aqueous outflow system(4-6).

Trabecular microbypass devices, such as iStent and iStent inject, are used to create a direct passage through the trabecular meshwork, leading to communication between the anterior chamber and the posttrabecular structures(3,7-10).

In open-angle glaucoma, surgeries are often indicated when medication treatment or laser trabeculoplasty has failed. This is probably not the best scenario for trabecular microbypass surgeries, as a failure of noninvasive therapies can be an indirect predictor of poor viability of the posttrabecular outflow system(11).

We hypothesized that the best outcomes with trabecular bypass surgeries would be achieved when IOP is still under control with topical medications, as this is a sign of a viable and still functioning posttrabecular outflow system.

To the best of our knowledge, no clinical evidence is available regarding differences in trabecular microbypass surgery outcomes based on IOP control under glaucoma medications before surgery. Konopinska et al. prospectively assessed the success of combined cataract and first-generation trabecular microbypass procedure in eyes with a baseline IOP (after washout) above or below 26 mmHg without pharmacological therapy. They found that eyes with IOP<26 mmHg without pharmacological therapy achieved higher rates of success(12).

This retrospective study examined eyes treated with either iStent or iStent inject in a single center.

The inclusion criteria were first- or second-generation trabecular bypass implant surgery, age >18 years, open-angle glaucoma (primary open-angle glaucoma, pigmentary glaucoma, or pseudoexfoliative glaucoma), glaucoma-only or combined with cataract surgery, at least 6 months of follow-up, and no ocular comorbidity. We included only one eye per patient; hence, if both eyes of the same patient were eligible, we randomly selected one of them.

The exclusion criteria were missing data in the records, all other types of glaucoma, including normal-tension glaucoma, and ocular comorbidity. We also excluded the first 10 cases of iStent implantation and the first five cases of iStent inject implantation because they were considered part of the learning curve. All surgeries were performed by the same surgeon in a single site.

In addition to the demographic and clinical data (age, sex, race, type of glaucoma, and glaucoma stage), we evaluated the mean follow-up time, changes in IOP, number of glaucoma medications, and visual acuity from the preoperative period to the end of follow-up.

The glaucoma stage was determined according to the Hodapp-Parrish-Anderson criteria based on the mean deviation (MD) of Humphrey computerized perimetry. Eyes were categorized as having mild (MD better than -6 dB), moderate (MD between -6.00 dB and -12.00 dB), and advanced (MD worse than -12.00 dB) glaucoma(13).

This study was performed in accordance with the Declaration of Helsinki and was approved by the Ethics Committee of the Santa Casa de Misericordia de Juiz de Fora (CAAE: 21327319.5.0000.5139).

Group 1 and Group 2 consisted of 105 eyes (61.8%) and 65 eyes (38.2%), respectively. The mean (± SD) follow-up periods were 21.2 (± 8.2) months and 18.4 (± 9.1) months, respectively (p=0.048). Table 1 presents the baseline characteristics of the groups. The baseline number of medications, glaucoma stage, and type of surgery were statistically different between groups and as these variables could have influenced our findings, we performed additional analyses for their control. 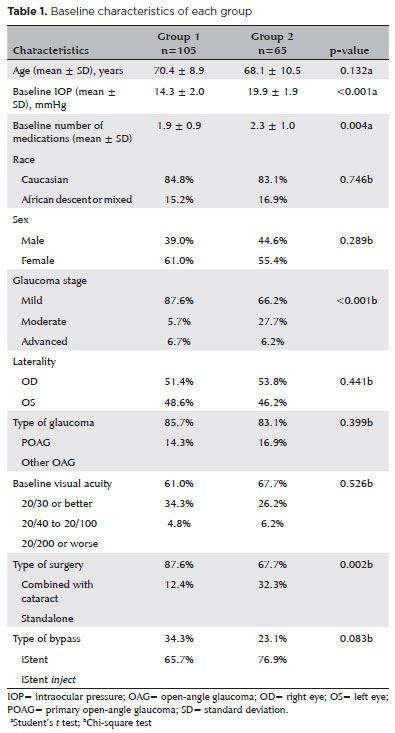 At the end of the follow-up, the mean IOP reduction (percentage) was 6.3% in Group 1 and 29.1% in Group 2 (between-group comparison, p<0.001). Figure 1 shows the changes in IOP for each group. Table 2 shows the changes in the mean IOP and mean number of glaucoma medications from baseline to 24 months and the sample size for each group during follow-up. Success rates according to IOP are given in table 3. 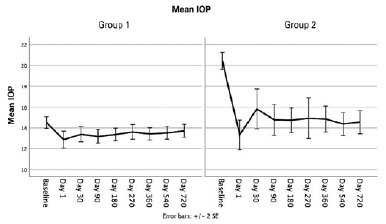 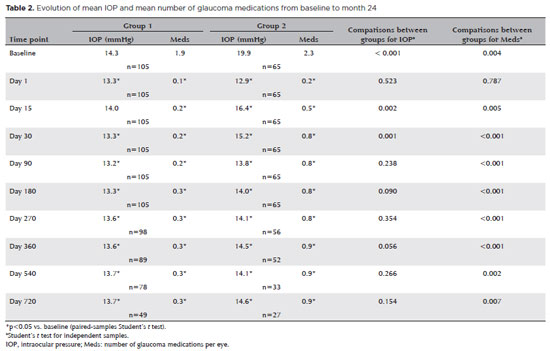 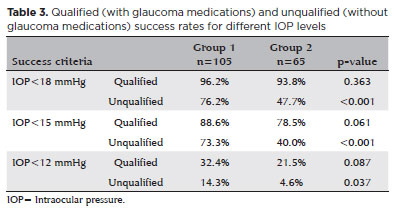 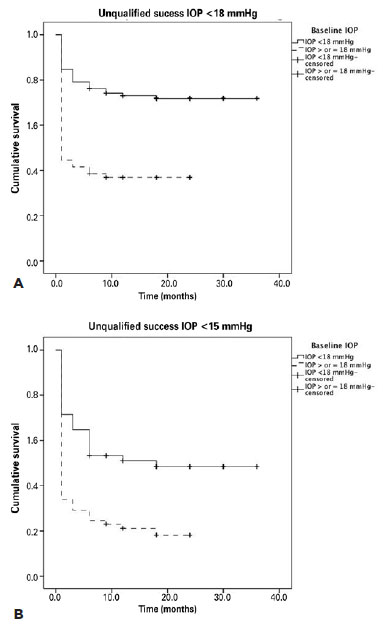 Figure 2. Kaplan-Meier survival curves for complete success for both groups: (A) IOP<18 mmHg and (B) IOP<15 mmHg.

Figure 3 shows the final number of glaucoma medications per eye at the end of follow-up (mean: 20.1 months). 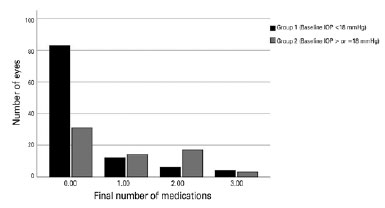 Figure 3. Proportion of eyes according to the number of glaucoma medications at the final time point for both groups.

In Group 1, one eye showed peripheral anterior synechia occluding the internal ostia of the iStent, which was corrected by Nd:YAG laser iridotomy. In this group, one eye presented with uncontrolled IOP, requiring surgery during the follow-up. The patient could not tolerate any ocular hypotensive agents due to ocular allergy, and the iStent was not sufficient to control IOP.

In Group 2, two eyes required surgery due to uncontrolled IOP. These eyes developed steroid-induced IOP spikes. Patients had to be kept on systemic steroids for pulmonary and rheumatological diseases. These eyes were excluded from the analyses of IOP, medications, and success rates.

We performed univariate analysis for each possible confounding variable (baseline number of medications, glaucoma stage, and type of surgery) and a multivariate Cox regression survival analysis. Although Groups 1 and 2 were well-balanced according to the type of bypass (iStent vs. iStent inject), we decided to include this variable in this analysis.

Group 2 had a higher proportion of eyes with moderate glaucoma, and Group 1 had more eyes with mild glaucoma. We controlled for the glaucoma stage by evaluating outcomes considering only patients with mild glaucoma. In all, 92 were included in Group 1 and 43 in Group 2, and 84.8% and 60.5% of eyes, respectively, were medication-free at the end of follow-up. Qualified success rates were similar between the groups, however, eyes in Group 1 had a higher complete success rate, confirming our previous results.

Type of surgery (combined vs. standalone)

The results did not change when we controlled for the type of surgery. When we included only combined surgeries, more eyes were medication-free at the end of follow-up in Group 1 than in Group 2 (85.9% vs. 56.8%, respectively, p<0.001). There were no differences between the two groups in qualified success rates whereas complete success rates were significantly higher in Group 1.

Considering eyes treated with iStent inject only, Groups 1 (n=69) and 2 (n=50) were similar according to age, race, baseline number of medications, sex, laterality, glaucoma type, type of surgery, and follow-up period. Again, the qualified success rates did not differ between the groups whereas complete success rates were significantly higher in Group 1. A significantly greater number of eyes treated with iStent inject were not receiving medications at the end of follow-up in Group 1. The percentage of eyes with IOP reduction was greater in Group 2 while the percentage of eyes with a reduction in the number of medications was higher in Group 1.

We considered IOP<18 mmHg without pharmacological treatment as a dependent variable for the regression model. All possible confounding or independent variables were included. The following independent variables were tested in the model: age, race, sex, laterality, baseline visual acuity, baseline number of medications, glaucoma stage, intra- and postoperative complications, type of surgery, and type of trabecular bypass (iStent or iStent inject). A significance of 95% was necessary for the variable to remain in the model.

Four steps were necessary until the final model was generated. Multivariate analysis confirmed baseline IOP<18 mmHg as a strong predictor of unqualified success, along with combined surgery and use of iStent inject. We present the regression results as well as their interpretation in table 4.

The groups had similar qualified success rates for different IOP levels. However, medically controlled eyes at baseline (medicated IOP<18 mmHg) showed consistently higher rates of medication-free outcomes. Hence, trabecular microbypass is useful and effective for both situations. However, there is a greater likelihood of achieving a medication-free outcome for eyes with a baseline medicated IOP<18 mmHg. Therefore, for such eyes, trabecular stents are a very useful and effective tool as replacement therapy for medications.

The observed reductions in IOP are consistent with other studies regarding iStent and iStent inject(14-17). We found that IOP decreased by a mean of 16.5% for the whole cohort, which included both pharmacologically controlled and uncontrolled eyes. Using a baseline IOP cutoff point of 18 mmHg to separate controlled from uncontrolled eyes under pharmacological therapy, we found that the percentage of eyes that achieved IOP reduction was higher in those with higher (IOP ≥18 mmHg under pharmacological treatment) than lower baseline IOP (29.1% vs. 6.3%, respectively), consistent with Ferguson et al.(18).r The higher is the baseline IOP, the higher is the percentage reduction in IOP. Therefore, there is a floor effect on the capacity of trabecular bypass for IOP reduction, which is the posttrabecular resistance to aqueous outflow. Regardless of the baseline IOP, there is always a greater chance of achieving a low to mid-teen final IOP value. If the eyes already have IOP close to the final reachable IOP value, based on the posttrabecular resistance, there is almost no additional reduction in IOP, and the benefit is in the reduction of medications.

Although assessing a different trabecular device, but which also acts by bypassing the trabecular meshwork, Fea et al. found that in patients with preoperative IOP of 18 mmHg or higher, the reduction in IOP and in the number of medications was higher(19). The relationship between baseline IOP and the amount of IOP reduction is consistent in the literature, and we have also found that a higher baseline IOP is associated with higher reductions in IOP. However, outcomes concerning the relationship between the level of baseline IOP and the amount of medications reduction are contradictory. This could be related to differences in the study population and significant differences between the devices (size, mechanism of action, etc.).

As demonstrated in many previous studies, trabecular stenting procedures have a very good safety profile(14-16,20). Most eyes showed improvement in visual acuity and were complication-free in both groups. No serious adverse events were observed during the follow-up.

Although the study population consisted of 170 eyes, the groups were not significantly similar in some important variables, such as baseline number of medications, glaucoma stage, and type of surgery (standalone or combined). These are important confounding variables, as they can also be a reflection of posttrabecular viability(11). A smaller number of baseline medications, early glaucoma stages, and combined surgery are all related to a potentially better posttrabecular status(11). Another possible confounding variable was the type of trabecular bypass device. iStent and iStent inject have different designs and slightly different efficacy profiles(9,17,21). After controlling for such variables in both univariate and multivariate regression analyses, the results were consistent and robust, confirming that IOP level under pharmacological therapy was a strong driver for our outcomes.

The strengths of our study include a large sample size (n=170), long-term follow-up (6-38 months), a real-world setting, and a single center design. We also included both standalone and combined procedures, different glaucoma stages (mild to advanced stages), and first- and second-generation trabecular bypass devices.

However, our study had some limitations including its retrospective design. In addition, the majority of our patients were Caucasian, which limits the external validity of our findings. We have not controlled our study groups for medication adherence. This could have had an influence in our results, as some patients might have been included in group 2 (uncontrolled IOP) as non-respondent to medications, but the real issue could have been poor adherence. This confounding variable could have exacerbated the medication-free results in group 2, and we speculate that if we control for this important variable, the difference between groups would be even greater than we have found. When controlling for the number of baseline medications, we excluded patients on 1 medication. Results for patients under at least 2 medications might not be completely applicable for the patients on 1 medication, so one should be cautious when interpreting this attempt to control for such variables.

Further investigations, preferably in prospective and randomized clinical trials, are needed to confirm our findings.