Purpose: To describe the clinical outcomes of manual scraping of epithelial ingrowth followed by compressed heating air flow after laser in situ keratomileusis (LASIK).
Methods: We underwent a retrospective, noncomparative, and interventional case series. Twenty eyes of 17 patients were included in this study. Each patient with a history of LASIK underwent epithelial removal with mechanical debridement followed by compressed heating air flow. Our primary outcome was the recurrence of epithelial ingrowth after 3 months of follow-up, while our secondary outcomes were uncorrected distance visual acuity, corrected distance visual acuity, and complications after surgery.
Results: Ten patients (58.8%) were male, and eight eyes of seven (41.2%) patients underwent primary LASIK surgery, while12 eyes of 10 patients had flap-lift retreatment LASIK; sixteen eyes (80.0%) underwent mechanical microkeratome LASIK and four (20.0%) underwent femtosecond laser-assisted LASIK. Mean age at surgical removal of epithelial ingrowth was 37.0 years ± 9.3 years (range 24 to 55 years). There was recurrence of ingrowth in two eyes (10%) after 3 months of follow-up. The mean corrected distance visual acuity of patients before surgery was 0.07 ± 0.09 logMAR, and after the last follow-up was 0.02 ± 0.04 logMAR (p=0.06). The odds ratio of presenting with epithelial ingrowth after LASIK enhancement compared to primary LASIK was 29.41.
Conclusion: Manual scraping followed by compressed heating air flow is a safe and effective treatment of clinically significant epithelial ingrowth after LASIK. At the last follow-up, no eye lost any line in corrected distance visual acuity.

Epithelial ingrowth remains a relevant topic in modern refractive surgery. It leads to unsatisfying results from a continuous foreign-body sensation, irregular astigmatism, decrease visual acuity, and flap melting. Its incidence varies in the literature from 0% to 20% following laser in situ keratomileusis (LASIK) cases(1-4). Although epithelial ingrowth is frequently self-limiting and can be observed without requiring intervention, in a small number of cases epithelial ingrowth may progress with permanent visual loss(5).

Two mechanisms related to epithelial ingrowth appearance have been described: the first one is the deposition of epithelial cells by microkeratome or other devices during the surgical procedure. The second mechanism is the postoperative migration of epithelial cells from the flap gutter across the flap interface due to the presence of a pathway. Risk factors are mechanical microkeratome, hyperopic LASIK treatment, buttonholes, retreatments, and advanced age(6-7).

A number of different techniques for removing epithelial ingrowth have been described. These include surgical lifting and debridement of the LASIK flap(8), ethanol-assisted debridement(9), flap suturing(10), Neodymium:YAG laser treatment(11), and fibrin glue surgical adhesive(12). Despite diverse treatment options available, recurrence of epithelial ingrowth is frequent with rates ranging from 5% to 68% after surgical removal(6-14).

In this study, we presented 20 cases of flap lifting and manual scraping of the epithelial ingrowth combined with compressed heating air flow after LASIK seen at the Brasília Ophthalmologic Hospital (HOB), Brasília, Brazil, between January 2014 and December 2017.

We underwent a retrospective, noncomparative, interventional case series. All cases of epithelial ingrowth after LASIK who underwent flap-lift and epithelial debridment in the HOB were identified from the records of the surgeons performing regular LASIK between January 2012 and May 2017.

Primary laser in situ keratomileusis was performed with either a Hansatome microkeratome (Chiron Corp, Irvine, California, USA) or a Femtosecond Intralase. The 120-micro plate of the Hansatome was used to create a superiorly hinged laser in situ keratomileusis flap; the femtosecond laser (Intralase Corporation, Advanced Medical Optics, Inc, CA) was programmed to delivered the following settings: 100 µm thickness; 9.0 mm diameter, superior hinge with 45-degree angle, and 60-degree side-cut angle. In all eyes, surgery was planned to leave minimum 30 microns of residual stromal thickness using the above settings.

The same surgeon performed all the procedures. The cornea was marked with a radial marker with Rose Bengal ink. The flap edge was determined by depression with a spatula, noting the change in light reflex. The corneal epithelium was removed over the 1.0-mm margin of the flap on either side of the gutter to allow adherence of the flap after removal of the ingrowth. The flap was then lifted using the same spatula. Epithelial cells were removed with a blunt spatula, and a dry lint-free sponge from behind the flap and the underlying stromal bed. The flap was laid back down after irrigation with a balance salt solution, stretched, and positioned in place with a delicate moinstened brush. After, a local compressed heating air flow was directed toward the cornea to dry and promote flap adherence for 30 seconds in a temperature of 40°F. A bandage contact lense was placed. Moxifloxacin (Vigamox) and ketorolac of tromethamina 0.4% (Acular LS) were given immediately postoperatively and continued thrice daily until removal of the contact lens.

Each eye was evaluated on the first day after surgery and after 7 days for removal of the bandage contact lens. The presence or absence of epithelial ingrowth was evaluated again after 3 months and at the final follow-up.

All eyes were diagnosed of clinically significant epithelial ingrowth, and the most common indications for the epithelial ingrowth were corneal irregularities causing symptoms such as halos, glare, or reduced visual acuity, and chronic foreign-body sensation (Figure 1). No patient had diabetes or anterior basement membrane dystrophy. All cases had peripheral ingrowth with inward contiguous extensions toward the visual axis. 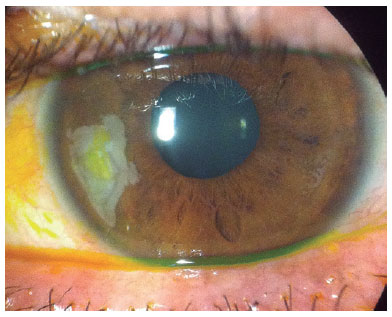 All cases were followed up for at least 6 months. The mean follow-up time after the repair surgery was 18 ± 16 months (range, 6 to 61 months). None of the cases had a loss of CDVA over the pretreatment measurement. Two eyes (10%) exhibited mild recurrence epithelial ingrowth. These patients did not require subsequent treatment.

At the last follow-up, there were no associated complications during or after the procedure. None of the eyes lost any line in CDVA, developed epithelial defect, diffuse lamellar keratitis, or infections.

Epithelial ingrowth is an unusual complication after laser in situ keratomileusis (LASIK). In this study, the incidence of epithelial ingrowth after primary LASIK was 0.43% in 1854 eyes and was consistent with literature where the incidence ranged from 0% to 20%(1-4). This wide difference in the reported incidences could be explained by the diverse methodology employed in the studies. For example, some included asymptomatic and nonprogressive cases, and others not. In addition, this variation can also be related to the definition of epithelial ingrowth or to the method used to lift and replace the LASIK flap during the procedure(15,16). Technically, the presence of any epithelial cells beneath the flap after LASIK can be termed epithelial ingrowth as they do not belong to this site.

Usually, the epithelial ingrowth is detected by the 1-month postoperative visit. In our series, this was detected in 12 eyes (60%). Wang and Maloney(3) revealed that 90% of cases were detected within 2 months after surgery. Early recognition allows for appropriate monitoring and intervention when required. Most cases were self-limited around the edge of the flap and required no. However, Naoumidi et al.(21), suggested that epithelial ingrowth should be treated as soon as possible to prevent progression, irregular astigmatism, and stromal melting.

Other reports have found that epithelial ingrowth treatment can be associated with a good visual outcome, depending upon the nature and severity of ingrowth. Henry et al.(22), reported a final UDVA of 20/20 or better in 45% of eyes and 20/40 or better in 80% of eyes. Our series supports this finding. The difference between the mean BCVA at the last visit before treatment and the last visit after the repair surgery was not significant (p=0.15).

Our study had limitations. First, sample size of the study was small to produce significant results. Further analysis should include more patients and compare different procedures of epithelial ingrowth treatment, as well as elucidate the real benefit of our technique. Second, this was a retrospective study: thus, the risk of inaccurate data and the control the investigator over the approach to sampling and follow-up of the participants were not optimal and ideal.