Sarcoidosis is a generalized systemic chronic inflammation that rarely involves the orbit. As a chronic inflammation, sarcoidosis typically manifests with an insidious onset and slowly progressive course. We report a case of acute-onset proptosis resulting from a rapidly growing diffuse orbital mass that simulated malignant growth, which was biopsy proven to be the first manifestation of systemic sarcoidosis. The patient demonstrated complete resolution of proptosis and systemic involvement with long-term corticosteroid treatment. 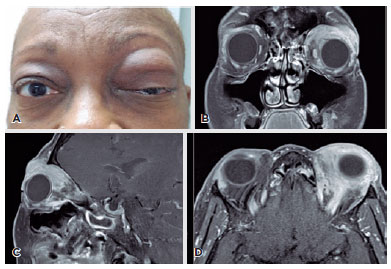 The patient consented to the publication of this case report and its related images.

On the basis of the absence of signs of acute inflammation and the rapidly progressive course, the provisional differential diagnosis included an acute lymphoproliferative process or a malignant infiltrative neoplasm of either primary or metastatic origin.

Histopathological examination of an incisional biopsy revealed many “naked” non-necrotizing granulomas (Figure 2A). The stroma was composed of epithelioid cells, scattered small lymphocytes, histiocytes, and numerous multinucleated giant cells (Figure 2B). Special staining for acid-fast bacilli and fungal organisms did not reveal any microorganisms. The non-necrotizing granulomatous inflammation was most consistent with sarcoidosis. Consequently, the patient submitted to systemic screening for sarcoidosis. On thoracic computed tomography (CT), prominent and enlarged mediastinal and bilateral hilar lymph nodes with no parenchymal manifestations were detected (Figure 2C). Figure 2. Histopathology of an incisional biopsy showing (A) many “naked” non-necrotizing granulomas. (B) As shown, the stroma was composed of epithelioid cells, scattered small lymphocytes, histiocytes, and numerous multinucleated giant cells (MNGCs). (C) The thoracic computed tomography scan shows prominent and enlarged mediastinal and bilateral hilar lymph nodes with no parenchymal manifestation. (D) The clinical picture of the patient after 2 years of diagnosis without signs of relapse of the disease in the orbit.

The patient was treated initially with 50 mg of prednisone, and the dose was tapered slowly over a few months to a maintenance dose of 5 mg every other day.

The patient demonstrated rapid regression of proptosis and ptosis with full restoration of ocular motility. The CT scan performed 2 months after the treatment revealed a significant interval decrease in the size of the infiltrative soft tissue mass in the left orbit, ruling out the provisional differential diagnosis. No signs of relapse of the disease were found in the orbit or thorax 4 years after diagnosis (Figure 2D).

Sarcoidosis is a generalized chronic multi-systemic inflammation. It has a predilection for females in their fifth to seventh decades of life and patients of African descent(3). Ophthalmic involvement occurs in almost 25% of patients with sarcoidosis, manifesting mostly as chronic uveitis, with orbital involvement representing <1% of the ophthalmic manifestations(1,4). However, orbital involvement frequently occurs without prior history of systemic sarcoidosis(1).

In a large series of orbital lesions, it represented <0.2% of all lesions and 2% of the orbital inflammatory lesions(5). Our patient has the typical demographics of a patient with sarcoidosis; however, the acute rapidly progressive course of few weeks for such an extensive orbital lesion is atypical for a chronic inflammatory process. In a series of orbital and adnexal sarcoidosis, the most common complaint was a slowly progressive mass in 88.5% of the cases, with discomfort in 30%(1). The rapidly progressive clinical presentation in our patient was suggestive of a malignant process, which was refuted by the orbital biopsy findings, presence mediastinal lymph node enlargement in the subsequent thoracic imaging, and the prompt response to steroid treatment. Albeit rare, our case emphasizes the importance of including sarcoidosis in the differential diagnosis of acute rapidly progressive orbital lesions and considering systemic surveillance of the disease if biopsy revealed orbital sarcoidosis.