We report an unusual case of fulminant endogenous Clostridium septicum panophthalmitis. A 74-year-old male patient presented with sudden amaurosis in the right eye, which in a few hours, evolved into an orbital cellulitis, endophthalmitis, anterior segment ischemia, and secondary perforation of the eye. A complete diagnostic study, which included cranial and orbital contrast-enhanced computed tomography scan, contrast-enhanced magnetic resonance imaging, blood cultures, and complete blood work, were performed. No causal agent was identified. Clostridium septicum infection caused fulminant gaseous panophthalmitis. Despite broad-spectrum antibiotic treatment, evisceration of the eyeball was necessary. The extension study showed a colon adenocarcinoma as the origin of the infection. Clostridium septicum panophthalmitis is a rare but aggressive orbital infection. This infection warrants the identification of a neoplastic process in the gastrointestinal tract in many cases not previously described.

Endophthalmitis is most frequently caused by exogenous factors and occurs after a penetrating wound, corneal ulcer, or periocular infection. On the other hand, endogenous endophthalmitis is relatively uncommon, representing only 2-8% of all endophthalmitis cases. It is caused by microorganisms that reach the eye after a bacteremia secondary to an extraocular focus of infection(1). Clostridium septicum is rarely the culprit of such cases, and if so, an extensive search for risk factors must be performed.

A 74-year-old male patient with insulin-dependent type 2 diabetes, high blood pressure, dyslipidemia, ischemic cardiomyopathy, carotid atherosclerosis, and cognitive impairment visited our hospital with a painful eye and sudden confusion. He had a prostatic adenocarcinoma removed a year before and was an implantable cardioverter-defibrillator carrier because of ventricular fibrillation episodes. Cranial computed tomography (CT) and blood tests were performed, and the patient was hospitalized in our stroke unit. After a few hours, he developed amaurosis, a reactive myosis, acute pain, hyperemia, and proptosis in his right eye (RE).

In the ophthalmologic exploration, an amaurotic eye with areflexic myosis, conjunctival hyperemia, and intraocular pressure (IOP) of 46 mmHg was observed, without other significative changes. The patient was treated with intravenous (IV) 20% mannitol at 250 ml once and acetazolamide 250 mg orally every 8 hours with subsequent IOP lowering. A few hours later, a remarkable proptosis is observed, accompanied by chemosis, vascular ingurgitation, and “frozen eye”. Under the suspicion of a retro-bulbar hematoma or carotid-cavernous fistula, emergency magnetic resonance imaging (MRI) and angio-MRI were performed. No signs of vascular disorders were discovered, except for an increase in soft tissue both in the pre- and post-septal spaces, without paranasal sinus occupation, compatible with orbital cellulitis (Figure 1). In the blood count, neutrophilia and leukocytosis were present. 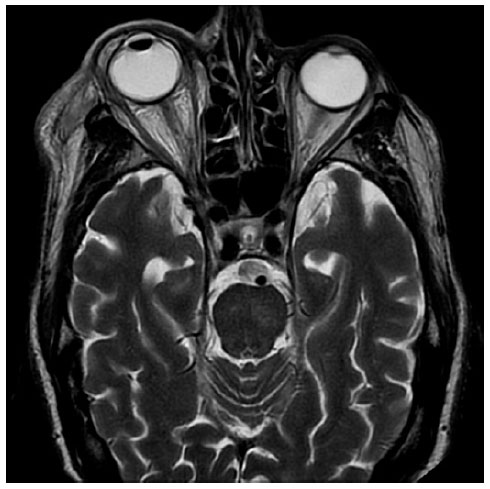 Figure 1. Magnetic resonance image showing proptosis of the right eye and increased diffuse soft tissue volume, with T2 hyper intensity in both the pre- and post-septal spaces. These findings are compatible with orbital cellulitis and small subconjunctival abscesses.

On the basis of these results, conjunctival secretion samples were tested for bacteria and fungi. Blood cultures were taken, and new blood tests, including anti-nuclei antibodies, anti-neutrophil cytoplasmic antibodies, and angiotensin-converting enzyme, were requested.The infectious disease department was consulted, and broad-spectrum IV antibiotic treatment was initiated with piperaciline-tazobactam 4 g every 6 h and linezolid 600 mg every 12 h. Topical antibiotic treatment was also initiated with tobramycin 1 drop every 3 hours and ofloxacin 1 drop every 3 hours. IV steroids (methylprednisolone 60 mg every 24 hours) were also administered 48 hours after the start of the systemic antibiotherapy.

Seventy-two hours from the onset of the symptoms, the RE developed an ischemic necrosis of the anterior segment that led to a spontaneous corneal perforation (Figure 2). A new orbital MRI was performed to search for an orbital or subperiostic abscess, without any findings suggestive of its presence (Figure 3). 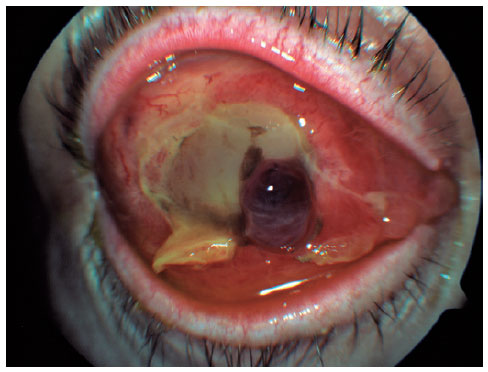 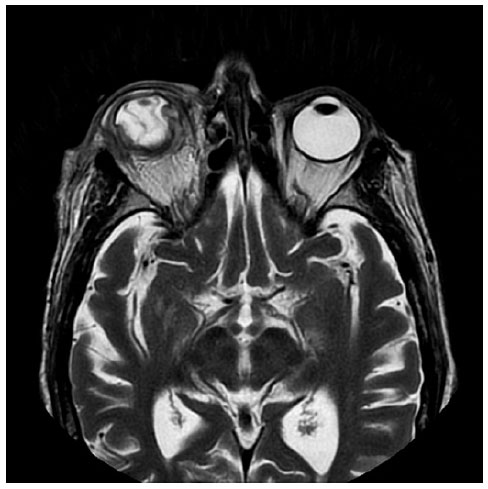 Figure 3. Orbital magnetic resonance image (MRI) showing decreased contrast of the pre- and post-septal soft tissues as compared that in the previous image, with destruction of the eyeball integrity, collapse of the anterior chamber, and retinal and choroid detachment.

The RE was eviscerated, and samples were sent to the pathology and microbiology departments. Necrotic tissue compatible with endophthalmitis and Clostridium septicum was isolated in the ocular remains and vitreous humor.The blood cultures and results of other blood tests (performed under the suspicion of an autoimmune origin, sarcoidosis, or Wegener granulomatosis) were negative. An extension study was requested to examine the endogenous origin of the infection. A mass in the transverse colon was detected on abdominal CT scan. Colonoscopy and posterior pathological examinations confirmed the presence of a colon adenocarcinoma.

Clostridium septicum panophthalmitis is a rare form of gangrenous panophthalmitis with a typically torpid evolution. Even with precocious systemic broad-spectrum antibiotic treatment, to which the pathogen is sensitive, the affected tissue is still seriously damaged. The disease could cause sepsis and even lead to the death of the patient.

A strong association was found between clostridium infection and colorectal carcinoma(5,6). C. septicum proliferates in low oxidation-reduction potential conditions(7). These circumstances do not occur in healthy intestines. They, however, occur in colorectal carcinomas, so a complete systemic study must be performed in these cases to find the origin of the infection(8,9). In some cases, as in our case, the first manifestation of colorectal carcinoma is panophthalmitis(10).

Owing to the aggressive nature of this infection, a precocious instauration of broad-spectrum antibiotherapy is key to a positive outcome. In our case, corneal perforation and loss of the eye could not be avoided, but evolution to sepsis or even death was eluded.

Informed consent was obtained from all the patients included in this study.