Lacrimal gland choristomas are benign lesions formed by normal lacrimal gland tissue (LGT) present outside the lacrimal fossa. LGTs may occur in a variety of unusual places and are either heterotopic(1), aberrant(2), or ectopic(3). This type of choristomas is uncommon and extremely difficult to identify in a clinical setting as they may mimic neoplastic(4) or parasitic lesions(5). The knowledge related to these lesions is limited due to the inconsistency in the terminologies used to describe them. Also, the information pertaining to its epidemiology, topographic location, and neoplastic transformation is unorganized and scattered across the literature, adding to the challenge.

The purpose of this article was to describe a new case of intraconal LGT and perform a literature review of similar previous studies that were based on the location and clinical characteristics of the lacrimal gland choristomas.

We searched the PubMed database using the key terms heterotopic, ectopic, aberrant, choristoma, and lacrimal gland (LG), for articles published between 1887 and 2019. All articles in English, Spanish, and French were reviewed and categorized based on the location of the lesions, their clinical appearance, management, and outcome. We also screened the references cited in the articles for additional reports, which were included in the literature analysis. 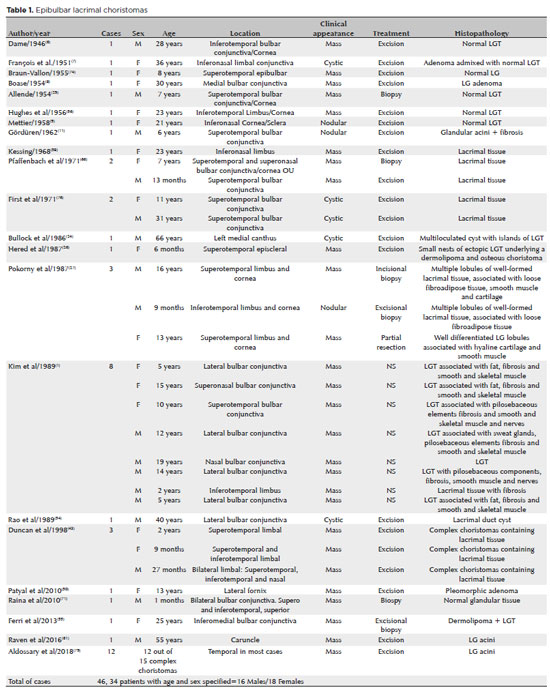 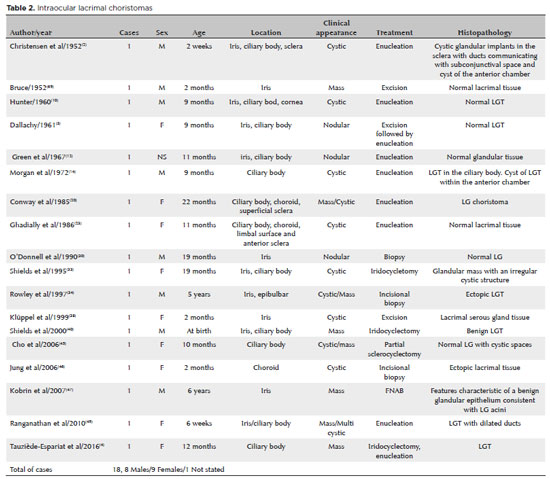 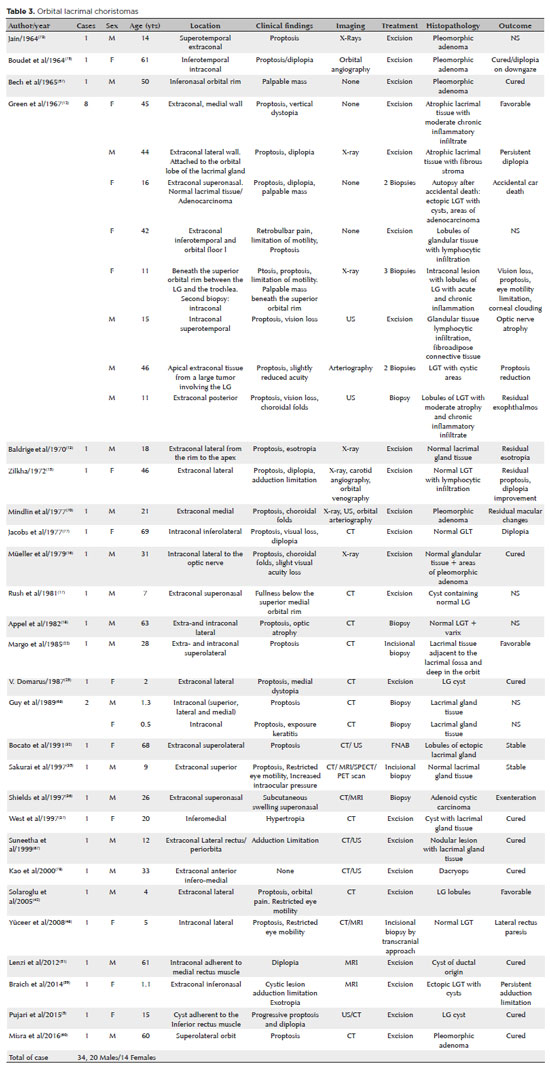 The overall female-to-male ratio was 1:1. The age of the patients at the time of surgical management of the LG choristomas correlated with the location of the lesion. The intraocular choristomas were managed at a median age of 10.5 months, whereas the epibulbar, orbital, and eyelid lesions were addressed much later in life, at a median age of 13, 18, and 43.5 years, respectively. Orbital choristomas were especially difficult to differentiate from inflammatory and neoplastic conditions. In all the reported cases, the LG choristomas were confirmed only after biopsy and histopathological examination.

A 30-year-old male presented to the University Hospital of Ribeirão Preto for a follow-up examination after having undergone lateral orbitotomy elsewhere 2 years ago. According to him, the procedure had been performed to treat right eye proptosis, secondary to a large orbital mass. His past medical history was significant for multiple steroid injections into the right orbit for the management of a presumed orbital hemangioma during childhood. Examination of the right eye revealed no proptosis and unrestricted ocular motility. The funduscopic and visual field examinations were normal. Magnetic resonance imaging (MRI) showed multiple, large intraconal cysts in the right orbit. T1- and T2-weighted MRI revealed well-circumscribed masses around the right optic nerve with high signal intensity compared to the vitreous on T1W and T2W images (Figure 1). Histopathological evaluation of the sections of specimen obtained from the previous orbital surgery revealed ducts and acini of benign LGT (Figure 2) and absence of atypical cells, mitotic activity, and necrosis. No further intervention was planned as the patient was asymptomatic. 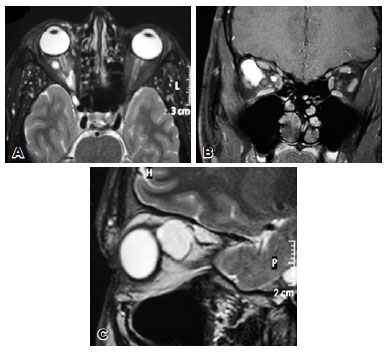 Figure 1. T2 – weighted magnetic resonance images of normal lacrimal tissue within the intraconal space of the right orbit. Notice the isolated tissue lobe in the axial (A) and coronal (B) slices. A large apical component of the lesion is seen in the sagittal slice (C).

The occurrence of ectopic LGTs and intraocular lacrimal gland choristomas, as well as their progression into tumors, has been known since the 19th century. In 1891, Schirmer reported a case of conjunctival adenoma located between the insertion point of the medial rectus muscle and plica semilunaris(7). Puech is considered to be the first to have reported a choroidal adenoma in an adult female in 1887(10,14). A large number of LG choristoma cases have been published since these early reports. Although the present review is highly representative of the studies reported in the literature, it is not exhaustive. Some ancient papers could not be retrieved, and manuscripts written in European languages were not included. The analysis of the literature review described in this article is similar to that of a recent publication on the same subject(81) where it has been presented in a more condensed form.

A question is whether ectopic LGT lesions are choristomas. The term choristoma is derived from the Greek word choristos (separated)-a tumor-like growth of microscopically normal tissue presents in an abnormal location(82). The LG is located in the orbital lacrimal fossa. Accessory LGs are present in the superior and inferior conjunctival fornix (glands of Krause), along the nonmarginal border of the tarsal plates (glands of Wolfring), and in the plica semilunaris and the caruncle(83). Thus, LGT lesions should be considered choristomas only if found outside these locations. Table 2 presents the cases of intraocular lacrimal choristomas found at different locations, as reported by several authors over the years. Ectopic LGT lesions might be a result of changes in the accessory lacrimal glands as in the case reported by Boase and Bullock who found an “ectopic” lacrimal cyst involving the caruncle or the medial aspect of the conjunctiva near the plica(8,24).

The second important characteristic of an ectopic choristoma is that it is distinctly separated from the anatomical structure it is derived from. A definite cleavage between a superolateral mass of LGT and the LG should be evident for consideration of an LGT as ectopic(84). Ectopic LGTs have been noted to be most commonly located in the epibulbar conjunctiva. However, in some of the epibulbar LGT cases reported previously, it is not clear if the superolateral masses that were considered as ectopic were actually detached from the LG(11,26,27,29,43,54,61,66,71,74,76).

A critical analysis of the published cases also raises doubts about whether all the reported lesions within the orbit represent true choristomas. Green et al. described a case wherein the excised tissue was attached to the orbital lobe of the LG(12). Kao reported a case of an inferior dacryops (rare, benign lacrimal gland/duct cyst) that was similar that of the accessory LGs usually found in the inferior fornix(78). The orbital images of superotemporal lesions found in some other cases do not show a clear disunion between the LGTs labeled as ectopic and the LG(32,60).

Only two other studies(12,85) on LG choristomas have described the distribution of lesions similar to that presented in our review. Alyahya et al analyzed sections of 61 LG choristoma specimen spanning 50 years, collected from the files of the Eye Pathology Institute of Copenhagen. They compared the details on location and clinical diagnosis of the lesion specimen with their histological findings. Out of the 61 lesions, 43 (70.5%) were found on the superotemporal portion of the bulbar conjunctiva(85). Although these studies did not provide any clinical information, they clearly specified the location of the lesions.

The embryonic development of LG is based on the general process of branching morphogenesis as it has a tubulo-acinar branching structure (lobules formed by acini and intralobular, interlobular, and excretory ducts) similar to a bunch of grapes(87,88). LG development depends on the interaction between the surface ectoderm and surrounding mesenchyme, which is facilitated by the exchange of chemical signals between groups of cells. This occurs through specific signaling pathways such as fibroblast growth factor 10 (FGF10), homeobox transcription factor Barx2, bone morphogenetic protein 7 (BPM7), and the canonical Wnt signaling family(89-91).

Mesenchymal FGF10 expression is crucial for LG induction(92-94) as it promotes epithelial gland proliferation by directly activating FGF receptor-2 IIIb in the conjunctival epithelium. Barx2, BPM7, and the canonical Wnt signaling family are responsible for the branching morphogenesis. Barx2, which is expressed in the epithelium, is necessary for branching elongation(95). BMP7 is expressed mainly in the mesenchyme, where it promotes the proliferation and aggregation of the cells, and a lack of this molecule impairs bud formation(96). The canonical Wnt cascade, on the contrary, is induced in the gland epithelium, inhibiting branching(97).

The evolving knowledge of the molecular mechanisms involved in LG morphogenesis rules out the old theory that lacrimal gland choristomas are a result of an aberrant migration of cells(2). In fact, it has already been experimentally demonstrated that activation of the FGF10 signaling pathway can induce LGT formation within the cornea(94). Thus, it can be safely concluded that lacrimal gland choristomas result from localized abnormal expression of the signaling molecules associated with LG morphogenesis. A similar conclusion was drawn by Milman et al. who analyzed the immunohistochemical characteristics of lacrimal hamartomas(98). They also noted that these lesions are derived from indigenous conjunctival precursor cells activated by mesenchymal influences.

The clinical management of lacrimal gland choristomas and their impact on vision depend on the location of the LGT. Epibulbar lesions can be easily excised without serious impairment of visual function. Choristomas in the eyelids also present as solitary masses which can be easily managed. However, orbital choristomas are very difficult to diagnose and remove and can severely impair vision. As noted in table 2, 8 out of 34 patients had persistent diplopia(12,13,15,48,59,75,77), two patients suffered vision loss(12), and one patient had to be exenterated due to malignant transformation(36).

Intraocular development of LGT poses the highest risk for vision loss. Based on the information in the literature, 9 out of 18 affected eyes were enucleated(2-4,10,12,14,20,23,49), mainly due to the difficult differential diagnosis of intraocular malignancies such as medulloepithelioma(4). The tear fluid is composed of electrolytes, metabolites, lipids, mucins, and a large number of proteins. Recent proteomic studies have identified more than 1,516 proteins in tears(99). Therefore, intraocular tear fluid production by ectopic LGT could contribute to the inflammation(34) or increase in ocular pressure, which has been verified in several studies(14,30,33,38,47,49).