Tobacco counseling in the setting of thyroid eye disease

Purpose: To collect data on the rate and efficacy of tobacco counseling sessions delivered by ophthalmologists under the setting of patients with thyroid eye disease.
Methods: We analyzed the electronic medical records of a digital cohort of patients who visited ophthalmologists at the University of Pennsylvania Health System from 2012 to 2017 with reference to the International Classification of Disease (ICD) codes for Graves’ disease, thyrotoxic exophthalmos, and/or thyroid eye disease. Tobacco histories were recorded at the first and last ophthalmology office visits or the most temporally proximal encounter in packs/day (ppd), and each ophthalmology visit note was analyzed to validate the occurrence of tobacco counseling.
Results: A total of 435 patients met our study inclusion criteria, of which 72 (16.6%) were active smokers at the time of their first visit. Only 57 (79.2%) of these active smokers had recorded smoking burdens, 34 (59.6%) of which received at least one form of recorded tobacco counseling session. Nine (26.5%) of the subjects who received tobacco counseling and 1 (4.3%) of those who did not have a recorded counseling, quit smoking (risk difference of 22.1%; 95% CI, [1.7%, 39.1%]; p=0.04). In addition, 17 (50.0%) of the subjects who received counseling and 7 (30.4%) of those who did not have a recorded counseling, reduced their ppd consumption (risk difference of 19.6%; 95% CI [-6.3%, 41.3%]; p=0.18). Overall, 14 (25.5%) out of the 55 ophthalmologists who were active smokers had recorded evidence of tobacco counseling.
Conclusions: Our cumulative results provide the consequence of both missed opportunities for tobacco counseling as well as its efficacy in the setting of thyroid eye disease.

Smoking remains one of the greatest risk factors contributing to premature death and affecting virtually every organ system in the human body. There is a lack of immediacy of health consequences, such as hypertension and atherosclerosis, from tobacco consumption. Therefore, one of the challenges in tobacco counseling is the development of chronic diseases whose impacts do not clinically manifest until several years of toxic accumulation. A 2005 cross-sectional analysis suggested that people would be equally motivated to quit smoking out of the fear of developing blindness as they would from the fear of developing lung cancer, heart disease, or stroke(1). In young people, however, the fear of blindness may motivate smoking cessation even more than the potential development of lung and heart diseases(2).

Thyroid eye disease (TED) presents a unique opportunity for tobacco counseling considering the immediate threat of visual impairment throughout the disease course as a complication secondary to exposure keratopathy, orbital congestion, and optic nerve compression. Based on the knowledge about the inflammatory nature of cigarette smoke, it is a part of the standard of care to encourage smoking cessation in TED patients in addition to providing the conventional medical management to further reduce the development of inflammation (steroids ± adjunctive radiotherapy) and the possible surgical interventions (such as tarsorrhaphy and, in severe cases, orbital decompression)(3). Smoking has been shown to not only increase the risk of developing TED but also to reduce the response to orbital radiotherapy and to oral(4) and intravenous(5) glucocorticoids. Moreover, smoking is known to delay the response to treatment of TED in a dose-dependent manner(6). Despite the risk that smoking poses for patients with TED as well as the development of age-related macular degeneration or cataracts, a survey of over 3,000 Americans revealed that only 9.5% of the patients were aware that smoking could cause blindness(7). Advising cessation of smoking and conducting frequent follow-up on an outpatient basis by physicians can increase the 1-year smoking cessation rates from 0.1% to 5%(8). A 2002 survey revealed that only 30% and 16% of ophthalmologists and optometrists, respectively, regularly advised their patients to quit smoking. The most concerning barriers to smoking cessation counseling recorded by this survey analysis was the lack of time for ophthalmologists and the lack of patient materials or training for optometrists(9).

In contrast to other eye diseases that are complicated by smoking, TED has an active inflammatory phase that makes tobacco counseling urgently imperative. However, until date, there is no published literature on how frequently ophthalmologists should offer tobacco counseling to patients or on the success of such counseling sessions under a specific setting of TED.

The Institutional Review Board (IRB) approval was obtained, and the exemption status was awarded to the study. All stages of this research were performed in compliance with the Health Insurance Portability and Accountability Act and they adhered to the tenets of the Declaration of Helsinki as amended in 2008. A patient cohort was compiled by using the Penn Data Analytics’ PennSeek search tool. This tool allows researchers to scan unstructured and semi-structured text within the electronic medical records (PennChart) of the University of Pennsylvania Health System. However, it also included imported documents from the external health systems. The inclusion criteria for the study subjects were as follows: current age of 18-120 years; a contact date between 01/01/2012 and 12/31/2017; examination at the Scheie Ophthalmology Penn Presbyterian Medical Center, Scheie Procedures and Diagnostic Center Penn Presbyterian Medical Center, and/or Scheie Eye Associates Hospital of the University of Pennsylvania; and a diagnosis code of E05.00 (ICD 10) and/or 242.00 (ICD 9). These codes of the International Classification of Diseases (ICD) are associated with a range of diseases and conditions, including Graves’ disease, thyrotoxic exophthalmos, toxic diffuse goiter, as well as the larger umbrella diagnosis of TED.

The history of smoking (of cigarettes and cigars) and using smokeless tobacco (e.g., snuff or chew) in packs per day (ppd) were recorded from the time of each patient’s first and last ophthalmology office visits. If the smoking histories were not recorded at these visits, the next most temporally proximal clinical visit, not limited to any particular healthcare worker, was considered instead. Each patient’s general substance history was reviewed to determine whether the patient was a former smoker, and, if so, the time since quitting was noted. The total number of ophthalmology office visits as well as the type of tobacco counseling was recorded for each patient and for each physician involved in the care of any one of the patients with TED.

Each ophthalmology office visit note was scanned for the predetermined key phrases using the native PennChart search tools. These search phrases included “smoking,” “cigarettes,” “tobacco,” “thyroid,” “Graves,” as well as abbreviations of these terms. Using these search phrases, every ophthalmology office visit note was individually assessed to determine the patient’s tobacco burden and whether the ophthalmologist had recorded any tobacco counseling efforts.

We grouped tobacco counseling into 4 broad categories, as shown in table 1. Although the counseling sections within ophthalmologists’ office visit notes were identified using search phrases, the precise categorization of the counseling efforts was determined using a subjective qualitative assessment by the abstractor (MJS) based upon these predetermined definitions.

The extracted data was aggregated and analyzed using a suite of tools and formulas available on the Microsoft Excel and Google Spreadsheets as well as the R version 3.5.1 software. All protected health information were converted into non-identifiable codes, and unique identification tags were used for the purposes of security.

The proportion of male versus female smokers was tested using a Chi-square test of 2 independent proportions. Due to the small sample size, Fisher’s exact test was selected to compare the association of counseling to the outcomes of quitting and reducing smoking. The confidence intervals for the corresponding risk difference were computed using the Newcombe’s method(10). 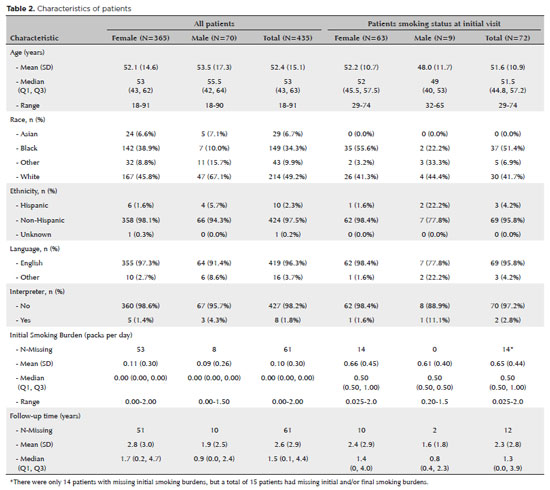 A summary of the types of smoking cessation counseling offered to the study subjects is provided in table 3.

Having at least one recorded session on tobacco counseling by an ophthalmologist increased the probability that an active smoker would either quit smoking altogether or reduce their consumption substantially. Although both the statistical outcomes showed large confidence intervals, the risk difference in the smoking quitting rates did rise to the level of 5% statistical significance. We therefore believe that future studies should involve a larger patient cohort to better power these analyses.

The quitting rate among the active smokers in our cohort was quite high at 17.5%, but it was even higher (26.5%) when they received at least one form of documented tobacco counseling session by an ophthalmologist. For comparison purpose, one randomly controlled trial revealed that the 6-month sustained smoking abstinence rates was only 6.0% for patients who received standard informational resources and, in some cases, access to nicotine-replacement therapies; and it was 9.4-16.0% for various financial reward-based incentive programs(14). One explanation for the high cessation rates in the present study is that the smoking status was determined based on the documentation in office visit notes, which in turn was dependent on patient communication. We suggest that the patients could be incentivized to downplay their smoking use in order to avoid judgment by healthcare workers. Future studies could remedy this situation by regularly undertaking biochemical tests to quantifiably determine the sustained smoking abstinence rates.

Dissemination of reading and video materials as well as grand rounds lectures by addiction medicine specialist guest speakers are only a few strategies to increase both the adoption and efficacy of tobacco counseling by ophthalmologists. Future studies should therefore explore options of training ophthalmologists on nicotine replacement and medication-assisted therapies.

This study was supported in-part by the core grant P30 EY001583 from the National Eye Institute, National Institutes of Health, Department of Health and Human Services.

Approved by the following research ethics committee: University of Pennsylvania (# 831779)

Disclosure of potential conflicts of interest: Dr. Briceño is a consultant for Horizon Therapeutics. None of the other authors have financial interests related to this manuscript