Brown syndrome (BS) is characterized by limited active and passive elevation of the affected eye in adduction(1,2). In addition to the limitation of elevation in adduction (LEA), patients with BS can manifest a widening of the palpebral fissure in adduction, divergence in upgaze, hypotropia in primary position, disfiguring downshoot during adduction, and abnormal head posture (AHP)(3-5). BS can be induced by a number of causes, including anomalies of the superior oblique (SO) tendon or of the trochlea, inflammatory diseases such as rheumatoid arthritis and systemic lupus erythematosus, infection, trauma, neoplasm, and iatrogenic processes(6-9).

Regarding the management of BS, mild and moderate cases can be observed for spontaneous resolution, but the healing process may take a long time. Surgical treatment is performed in severe cases. Patients with vertical deviation in the primary gaze position, AHP, significant diplopia, or disfiguring downshoot in adduction are candidates for surgical intervention(10-12). Several surgical procedures have been introduced for BS treatment, including SO tenectomy, SO tenotomy, Z tenotomy, split tendon lengthening, and tendon lengthening using the silicone band, adjustable nonabsorbable sutures, or autogenous expanders(6,13-16).

In this retrospective study, the medical records of patients who had been diagnosed with BS were reviewed. The study was performed at Inonu University Medical Faculty’s Ophthalmology Department between January 2012 and December 2017. An informed consent was obtained from all patients or their parents before conducting the study. The study protocol was approved by the Institutional Review Board and conducted according to the rules and regulations of the Declaration of Helsinki. Patients who had the clinical features of BS, including limitation of active elevation in adduction, AHP, hypotropia in primary position, or downshoot during adduction, were enrolled. Patients with any previous strabismus or orbital surgery, coexisting restriction other than limitation of elevation during adduction, incomplete records, and less than 6 months of follow-up were excluded from the study.

Based on visual acuity (VA) measurements performed using the Snellen or Lea chart, the amblyopic patients were determined. Amblyopia was defined as a best spectacle corrected visual acuity (BSCVA) of ≤20/30 and at least a difference of two lines between the amblyopic and normal eye of an individual. Stereopsis was measured using the Titmus stereoacuity test (Stereo Optical, Chicago, IL, USA) in compliant patients. AHP was measured using a goniometer on the vertical axis in the primary gaze position. Vertical and horizontal deviations in the primary position were measured using prism cover or Krimsky tests. LEA was recorded on a scale of 0 to -4, where 0, normal elevation; -1, elevation was 25% less than normal; -2, elevation was 50% less than normal; -3, elevation was 75% less than normal; and -4, the center of the pupil did not pass the imaginary line connecting the medial to lateral canthal angle(4,12).

Indications for surgery included the presence of AHP and/or hypotropia in the primary position. In total, 11 patients underwent SO tenotomy and 1 patient underwent bilateral SO tendon elongation with a silicone band. A forced duction test was performed to confirm the presence of BS in all patients before the surgery. In 4 of 10 patients associated with horizontal deviations, concurrent horizontal rectus muscle surgery was performed.

SO tenotomy: The SO tendon was isolated in the superotemporal quadrant and cut just medial to the superior rectus muscle. The forced duction test was repeated to determine whether there was complete improvement in limited elevation. The conjunctival incision was closed using 8-0 polyglactin sutures.

SO tendon elongation: After a conjunctival incision, the SO tendon was hooked on the nasal aspect of the superior rectus muscle. A small incision was performed through the tendon capsule to visualize the tendon fibers directly. Two 7-0 prolene sutures with spatulated needles were preplaced. The first suture was passed through the SO tendon 3 mm from the nasal border of the superior rectus muscle, and the second suture was placed in the same manner 2 mm nasal to the first suture. The SO tendon was cut between the preplaced sutures. The forced duction test was repeated to confirm whether the tendon has been completely transected. A 6 mm silicone band (No. 240) was then sutured between the cut ends of the tendon with the preplaced prolene sutures. The tendon capsule was closed over the silicone expander. The conjunctival wound was closed using 8-0 polyglactin sutures.

Statistical analysis was performed using the SPSS software version 22.0 (SPSS Inc., Chicago, IL, USA). Descriptive data were represented as mean ± standard deviation (mean ± SD), median (minimum-maximum), number (n), or percentage (%). The Shapiro-Wilk test was used to determine whether the data distribution is normal. Mann-Whitney U, Wilcoxon, and paired t-tests were used for data analysis. A p value of <0.05 was considered to be statistically significant.

Four patients (5 eyes; 1 patient had the bilateral form) with AHP, 4 with hypotropia, and 3 with AHP and hypotropia underwent SO tenotomy, and 1 patient with the bilateral form underwent bilateral SO tendon elongation with a silicone band due to AHP. In the last patient, the silicone expanders were removed at 3 months postoperatively because of a lack of improvement in AHP and LEA, and the ends of the SO tendon were released as done in the tenotomy procedure in 2 eyes of this patient. Four patients (8.89%) with exotropia underwent concurrent horizontal rectus muscle surgery. 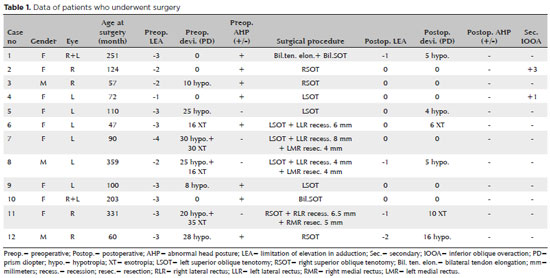 In 15 (45.45%) of 33 patients who did not undergo surgery, there was partially spontaneous recovery in patients with AHP, hypotropia, or LEA. Complete spontaneous resolution was observed in 2 patients (6.06%).

This retrospective study evaluated 45 patients with BS and detected a preponderance for the female gender, right eye involvement, congenital form, and unilaterality. In 126 cases collected by Brown, the disorder was found to more commonly affect the female gender (58.73%) and the right eye (61.90%)(17). Eustis et al. reported 70% involvement of the right eye and no gender dominance in 30 patients(18). In another study conducted by Cho et al., 60% of the patients were females, and 60% of the affected eye was the left eye(8). These previous studies indicate that gender and eye predilections in this disorder have not yet been determined precisely. Bilateral involvement in BS has been reported to be approximately 10%(19). In the present study, bilateral involvement was detected in 11.11% of the cases, which is consistent with the reported rate(19).

We found no previous study that examined the refractive status of patients with BS, except for the original series of Brown’s 126 cases(17). Brown reported no significant importance of refractive errors(17). In our study, the spherical equivalent of patients ranged from -18.50 to 4.50 D, with a median of 0.50 D. Amblyopia was found in 2 of 45 patients (4.45%) and was associated with horizontal strabismus in these 2 patients. Wright diagnosed amblyopia in 3 of 85 patients (3.52%), with 2 cases of anisometropic amblyopia and 1 case of strabismic amblyopia(20). Brown reported no significant frequency of amblyopia in his series of 126 cases(17). On the other hand, Clarke and Noel reported amblyopia in 7 of 28 patients (25%), a relatively high frequency of ambliyopia in patients with BS(21). We believe that the differences in the frequency of amblyopia are related to the small number of patients in each study, as well as the differences in measuring VA in each study.

In the surgical treatment of BS, the primary focus has been on the weakening/lengthening of the SO tendon(29). SO tenotomy, one of the commonly used procedures, is technically simple and requires a short operation time, but it carries a risk for the possibility of iatrogenic SO muscle palsy with overcorrection(12,14). The SO tenectomy procedure, in which a portion of the tendon is removed, has been found to be associated with a high incidence of iatrogenic SO paralysis(30). To overcome the occurence of SO palsy after tenetomy or tenectomy, SO tendon spacer techniques have been introduced. All spacer techniques are more difficult and time-consuming than tenotomy. The use of silicone band expanders has been reported to be associated with several complications, such as SO paresis, sterile orbital cellulitis, inflammation, foreign body sensation, extrusion of the silicone band, and adhesions(20,31-33). Recently, adjustable nonabsorbable suture spacers have increasingly been used for the weakening SO tendon with minimum side effects(12,16,34). In recent years, autologous spacers such as facia lata and palmaris longus tendon have also been used for lengthening the SO tendon with minimal complications(13,35).

In the present study, we performed bilateral SO tendon elongation using a silicone band in 1 patient (the first case of our series) with bilateral BS due to AHP. As there was no improvment in AHP and LEA at the postoperative 3rd month, the silicone bands were removed in both eyes and the cut ends of the tendon were released as done in the tenotomy procedure. SO tenotomy was performed in the remaining 11 consecutive patients because of our disappointment with the first case. The tenotomy procedure eliminated AHP in all patients and significantly reduced the mean LEA and hypotropia (Figure 1). Five patients (41.66%) had preoperative and postoperative stereopsis testing records, of whom 2 (16.66%) had an improved stereopsis and 3 (25%) had a stable stereopsis. Crawford performed SO tenotomy in 16 patients with true BS and found excellent results in 9 patients (56.25%), good results in 3 patients (18.75%), improved results in 3 patients (18.75%), and unimproved result in 1 patient (6.25%). The cause of failure in the last patient was reported to be due to a missed tendon during the operation. Crawford reported the results of SO tenotomy as the best(6). In the study conducted by Wright, 6 patients with congenital BS underwent SO tenotomy, and with a mean 4 months of postoperative follow-up, 5 of 6 patients (83.33%) were reported to have a vertical deviation greater than 5 PD, 2 of 6 patients (33.33%) had a significant residual restriction, and 3 of 6 patients (50%) had an overcorrection(20). Wright reported the results of SO tenotomy as poor(20). Cho et al. performed SO tenotomy in 4 patients with BS and reported that the mean vertical deviation decreased from 18.00 ± 16.08 to 3.00 ± 3.82 PD, and LEA completely resolved in 1 patient (25%) and improved in 2 patients (50%)(8). 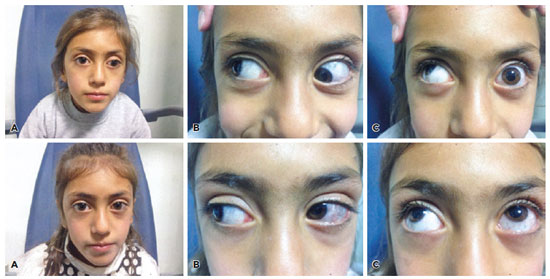 The present study has some limitations because of its retrospective design. First, the number of cases included in the study was low. Moreover, overcorrection, a well-known complication of SO tenotomy, developed in 2 cases after the tenotomy procedure. If we had used the adjustable nonabsorbable suture procedure that was becoming popular at that time, we might not have encountered this complication. We also had no chance of including a control group to compare our surgical results. Finally, the minimum postoperative follow-up period was short (6 months). It is known that the effect of SO weakening procedures on the elevation in adduction tends to increase over time, probably resulting in SO paresis. Therefore, a longer postoperative follow-up is required to evaluate the long-term effects of SO tenotomy.

In conclusion, most of the clinical features of patients with BS in this study were nonconflicting with the findings from early reports, except for refractive errors and A-pattern strabismus. The present study also demonstrated that SO tenotomy is an effective option in the surgical treatment of BS with less overcorrection and additional surgery. However, our surgical results must be confirmed by further studies with more cases and longer follow-up.