Photorefractive keratectomy (PRK) is a technique widely used for the treatment of ametropia and consists of removing the epithelial layer of the cornea, followed by ablation of the underlying stroma with excimer laser(1). Nevertheless, it is associated with slow visual recovery and significant postoperative pain(1).

Epithelial removal and stromal ablation promote corneal nerve injury, with consequent release of cytokines, growth factors, and metalloproteases that play a critical role in corneal wound healing. Therefore, pain is more severe on the first postoperative days owing to exposure of the corneal nerves and the release of the cytokines and other factors after surgery(1-6). Other common symptoms include tearing, eye redness, foreign body sensation, burning sensation, itchiness, photophobia, and eyelid swelling(1-6).

The epithelial layer can be removed using a spatula, 5%-25% diluted alcohol for 10-20 seconds, or excimer laser (transepithelial). The advantages of transepithelial PRK (tPRK) include faster and easier de-epithelization, which leads to less stromal dehydration and faster epithelial recovery(2). It uses an epithelial thickness profile similar to that used in phototherapeutic keratectomy (PTK) to remove the epithelium, on the basis of the average epithelial thickness of a population of normal eyes (53 mm centrally and 58 mm at the 6-mm periphery) as measured with different methods such as optical coherence tomography and confocal microscopy(7-13). All the methods of corneal epithelial cell removal are effective, but only a few studies have compared postoperative symptoms and patient satisfaction between the techniques(14,15).

The present study aimed to compare postoperative pain and discomfort between the mechanical PRK (mPRK) and tPRK techniques.

This prospective comparative study was conducted in the Department of Ophthalmology of the Federal University of Sao Paulo, Brazil, and included 190 eyes of 95 patients with hyperopia, astigmatism, and myopia who underwent mPRK in one eye and tPRK in the contralateral eye. Written informed consent was obtained from all the patients prior to their inclusion in the study. The study was approved by our institutional research ethics committee (approval No. 556234).

Eligible participants were all patients aged 20 to 60 years with a minimum corneal pachymetric value of 450 µm, myopia of up to -8.00 D, astigmatism of up to -5.00 D, and hyperopia of up to +4.00 D. The patients were excluded if they had autoimmune diseases, other eye diseases, diabetes, previous ocular surgery, or history of corneal infection; if they used oral medications that cause dry eye (isotretinoin, steroids, and antidepressants); and if they had clinical or topographic evidence of keratoconus. One eye in each patient was randomly chosen to undergo mPRK; and the other eye, to undergo tPRK. There was no preference as to which eye was operated first; this choice was random, so half of the first operated eyes underwent mPRK, and the other half underwent tPRK. The patients were unaware of which side was treated with each technique. They were instructed to discontinue wearing contact lenses 3 weeks before surgery.

All surgical procedures were performed by the same surgeon (B.K.M.) using the Wavelight Allegretto EX500 excimer laser system (Alcon Laboratories, Fort Worth, TX, USA). The interval between the first and second surgeries on the same patient was 15 days. Both eyes had similar refractions before surgery, with a maximum of 15-µm difference in ablation. Treatment was performed according to the patient’s refraction and laser nomogram. The epithelial debridement zone was 9 mm. Mechanical epithelial removal was performed with a blunt spatula, while transepithelial removal was performed using the PTK mode of the excimer laser system. All the procedures were performed with a 6.5-mm stromal ablation zone for all the patients. Immediately after ablation, mitomycin C 0.02% was applied to the ablated surface for 30 seconds, followed by irrigation with 20 mL of balanced salt solution. At the end of each procedure, a drop of moxifloxacin 0.5% + dexamethasone 0.1% (Vigadexa; Alcon Laboratories, Fort Worth, TX, USA) was administered to the treated eye, and a bandage contact lens was placed(16,17). Bandage contact lens of the same model and brand were used in all the cases (Biomedics 55; CooperVision, Lake Forest, California, USA).

Postoperative questionnaires were administered on days 1 and 7 to assess patients’ symptoms according to the routine of our institution. The patients were asked to rate on a scale from 0 (no discomfort) to 5 (extreme discomfort) their level of discomfort with the following symptoms: pain, burning sensation, itchiness, tearing, photophobia, eye redness, foreign body sensation, and eyelid swelling. They were also asked about which method they preferred. The study evaluated the symptoms on the first day to assess them when they are most severe and on seventh day to assess their recovery and improvement.

The pain response and other symptoms in the PRK group were measured using a self-administered questionnaire, with possible scores ranging from 0 (minimum value) to 5 (maximum symptom). The patients self-rated their pain response and other symptoms on the 5-point scale on the first and seventh days after surgery. We used non-parametric statistical tests, as we tested the normality of the quantitative variables of the main outcome using the Kolmogorov-Smirnov test and concluded that a normality distribution could not be assured. We used the Mann-Whitney test, considering a level of significance of 5%. We used the SPSS version 20 software for all statistical analyses, including graphs. 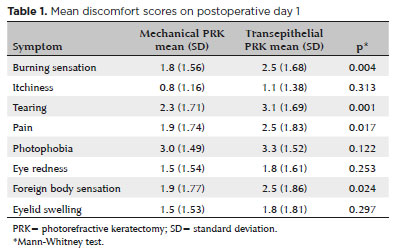 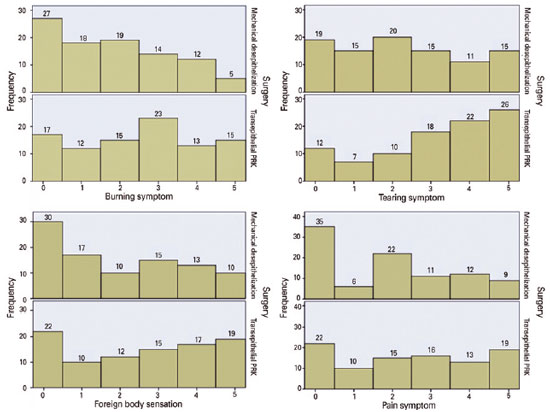 On postoperative day 7, we found no statistically significant differences in any symptoms between the mPRK and tPRK techniques (Table 2). Regarding the preferred technique, 59 patients (62.10%) preferred mPRK, while 32 (33.68%) preferred tPRK. Four patients (4.22%) expressed no preference. 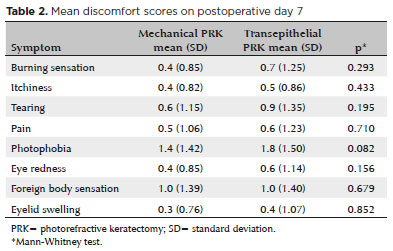 Pain and discomfort in the immediate postoperative period are a challenging but common problem in PRK. In the present study, the comparisons revealed that mPRK was superior to tPRK in terms of the patients’ pain experience and level of discomfort with tearing, foreign body sensation, and burning sensation on postoperative day 1, with no significant differences between the two techniques on postoperative day 7. The patients also expressed a preference for the mPRK technique. The interval between surgeries was 15 days, as it is the standard procedure in our service.

Lee et al.(2) were the first to evaluate epithelial healing and postoperative pain after PRK using three epithelial removal techniques (mechanical, 20% diluted alcohol, and excimer laser-assisted), but no significant differences were found between the groups after 6 months. Buzzonetti et al.(18) performed tPRK using the Nidek CXIII excimer laser and reported a mean (SD) pain score of 3.0 (1.2) (range, 1-6) after 3 months. Mohebbi et al.(4), using the Technolas 217P excimer laser, evaluated the potential role of sub-basal nerve plexus density in the occurrence of pain after PRK, but no relationship could be established.

Previous studies of PRK postoperative symptoms, for the most part, reported less pain and better healing with the tPRK technique(19-28). These studies, however, used laser systems different from that used in the present study. The authors are unaware of a previous study that compared postoperative pain and other symptoms between mPRK and tPRK performed with the Wavelight Allegretto EX500 excimer laser system.

The literature shows that tPRK causes fewer symptoms than mPRK in the studies that used the Schwind platform. However, the studies did not report whether the de-epithelialized area was the same in both techniques. In the present study, both techniques had the same de-epithelialized area using the Wavelight Allegretto EX500 platform. This allowed us to hypothesize that the tPRK group would have more symptoms than the mPRK group owing to the energy used for this process.

El Rami et al. studied pain in sequential LASIK surgeries and found greater pain in the second surgery, without defining any specific cause other than psychological or unknown factors. However, because our study had an interval of 15 days between surgeries and was randomized, we think this could have little effect on our results(29).

Among the first eyes treated, those treated with tPRK had worse pain, but the difference was not statistically significant. The eyes treated next had more pain than those that were treated first, similarly in the report of El Rami et al.(29). The difference between tPRK and mPRK was statistically significant (more pain in tPRK). We wonder whether this was influenced by any psychological factor or a residual inflammatory response from the first surgery.

Our study has few limitations. First, we only evaluated pain on the first and seventh day after operation and not daily; however, we asked the patients which technique they preferred in relation to pain and symptoms, so we covered the symptoms in the whole initial postoperative period. Other limitations were that we did not use the visual analog scale to assess pain and a validated questionnaire, but because our results were significant, we wonder if this would make a difference in the final results. Finally, we used some studies with alcohol-assisted PRK in the discussion because only few studies compared mPRK with tPRK.

In conclusion, we found that on postoperative day 1, pain and discomfort with tearing, foreign body sensation, and burning sensation showed significant differences between mPRK and tPRK performed with the Wavelight Allegretto EX500 excimer laser. In the mPRK-treated eyes, the pain scores were lower, which may have provided greater patient comfort after surgery and led them to prefer the mPRK technique. Although both mPRK and tPRK are effective techniques, further studies with similar de-epithelialized areas in both techniques are needed to evaluate post-PRK symptoms and discomfort. Future studies should also assess the new Wavelight Allegretto Streamlight tPRK laser technology platform.