Objective: To estimate the epidemiology of the pterygium and its correlation with dry eye symptoms and with the potential systemic and ocular predictors.
Methods: This study is a population-based, cross-sectional study in which random visits were made to the 600 households of 600 participants of age ≥40 years in Ribeirão Preto-SP (n=420) and Cassia dos Coqueiros-SP (n=180) in Brazil. The participants were subjected to a structured interview with a detailed questionnaire to collect information on demography and the potential risk factors. Next, random participants with pterygium (n=63) or not (n=110) were evaluated for the ocular surface changes.
Results: The frequency of pterygium in Ribeirão Preto was 21% (15.7% among women and 32.1% among men; p=0.0002). In Cássia dos Coqueiros, the corresponding frequency was 19.4% (17.3% among women and 25.5% among men; p=0.28). The mean age of the affected individuals was higher than that of the unaffected ones (65.6 ± 10.5 years vs. 61.2 ± 12.0 years, p=0.02). A positive correlation was noted between pterygium and any prior radiotherapy and chemotherapy (p<0.0001, for both). A higher score on corneal fluorescein and conjunctival lissamine green staining was associated with pterygium (p=0.0003 and 0.0001, respectively).
Conclusion: We noted a high frequency of pterygium in two Brazilian adult populations, mainly among the men and elderly. Ocular surface damage and a previous history of radiotherapy and/or chemotherapy were found to be associated with pterygium.

Pterygium is a fibrovascular tissue of a triangular shape that grows from the peribulbar conjunctiva toward the cornea(1).

A higher prevalence of pterygium has been reported in populations with high ultraviolet (UV) radiation exposure; this situation often related to working conditions, as demonstrated in the 3 studies conducted in China(2-4), 1 in Australia(5), and another 1 in India(6).

A few Brazilian population studies have been published within reach of the world literature that may depict the prevalence of pterygium in the various regions of this continental country. A study conducted in Botucatu, Southeast Brazil that included individuals of both the sexes and across ages showed a prevalence of 8.12%, affecting most frequently 40-50-year-old men(7). Two studies were conducted in the Brazilian Amazon: the first investigated 4 indigenous populations (Arawak, Tukano, Maku, and Yanomami), with adult participants of both the sexes, showing an 18.4% prevalence of pterygium, mainly in the Arawak and Tukano communities(8); and the second study included subjects ≥45 years of age from the urban and rural areas of the Parintins city that showed a pterygium prevalence of 58.8%(9).

Advanced age and male sex were frequently found to be associated with pterygium in previous studies conducted worldwide(5,10-15). However, in other researches, no correlations had been made between pterygium and sex(2,16,17). Similarly, some other studies showed no correlation between pterygium and age(8,18). These contradictory results may be biased by other factors such as the lifestyle, climate, and exposure to environmental risk factors among distinct populations. Therefore, there remains controversies among pterygium frequency, demography, and its risk factors. Table 1 displays the summary of population studies on pterygium prevalence, the risk factors, and factors without any association. 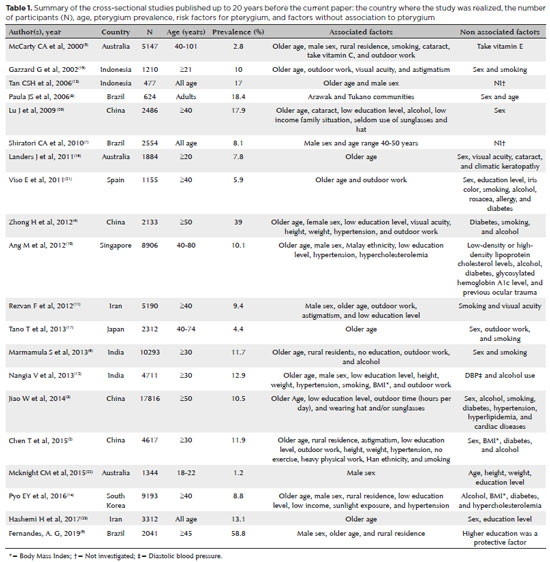 The present study aimed to estimate the pterygium frequency in 2 cities of the São Paulo State (in the tropical area of Brazil) and the correlation between this health issue and the ocular surface findings, as well as the ocular and systemic risk factors.

Type and location of the study

We conducted a cross-sectional field study in 2 municipalities of Brazil through visits to the homes of randomly selected participants.

The present study is a part of the original research on dry eye epidemiology in Brazil, in which we visited 600 participants at their residences, including 420 inhabitants belonging to Ribeirão Preto-São Paulo and 180 to Cássia dos Coqueiros-São Paulo of age ≥40 years and of both the sexes.

Where, n is the sample size, P is the expected prevalence (assumed to be 10%), and D is the maximum acceptable error, adopted by 1.5% in the estimate. Of the total 400, 30% of the sample size found in the calculation was added, providing for refusals and/or withdrawals from the selected participants.

The exclusion criteria were a refusal to agree with the study conditions or provision of the informed consent. All types of pterygium (i.e., primaries, secondaries, or a history of surgical pterygium excision) were included for the calculi of the frequency.

First, all participants were assessed for the analysis of lesions suggestive of pterygium. The ocular injury was characterized as pterygium if fibrovascular growth extending from the conjunctiva toward the limbus and enveloping the cornea was noted(16). The collection of data from the research was performed under the supervision of an ophthalmologist.

A detailed questionnaire interview was applied to collect information about the presence of 12 systemic factors, namely, 1. sex, 2. age, 3. diabetes mellitus, 4. woman post-menopause, 5. rheumatic diseases, 6. a previous history of leprosy, 7. treatment with chemotherapy, 8. treatment with radiotherapy, 9. thyroid diseases, 10. the use of antidepressants, and/or 11. the use of antiallergic chronically or within the last 30 days, and 12. dyslipidemia; as well as 4 ocular factors, namely, 1. a history of trachoma, 2. past ocular surgeries (such as cataract and blepharoplasty), 3. the use of contact lens, and 4. the use of the computer or cell phone for at least 2 hours in a day; in addition to the symptoms of dry eye disease (DED) (Appendix 1). 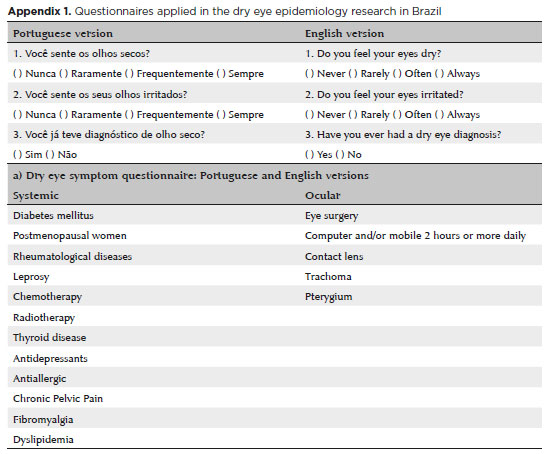 In the second phase of the study, 63 participants with lesions suggestive of pterygium to ectoscopy were evaluated at a health center and compared to 110 healthy controls without any previous conjunctival eye surgery. For this purpose, all participants who presented with symptoms of DED and 1 in every 5 participants with no symptoms were invited; based on the responses from the brief, previously described questionnaire(25,26).

The Schirmer test 1 (ST) was performed using a strip of filter paper (Ophthalmos Ltd., SP, Brazil) and the wetting of the tape was observed after 5 min of placing it on the temporal third of the patient’s lower eyelid without anesthesia.

The tear film breakup time (TFBUT) and corneal fluorescein staining (CFS) were determined by instilling a drop of 1% sodium fluorescein eye drops (Ophthalmos Ltd.) to check the tear break between a blink and the other eyelid and then to quantify the CFS following the 15-point National Eye Institute (NEI)/Industry scale (grades 0-3 for 5 regions of the ocular surface).

The following findings were considered with the signs of DED: ST 1 ≤10 mm, TFBUT <10 s, CFS >3, and CLGS >3. The presence of dry eye symptoms was considered on identifying a positive result on the Short Questionnaire or an OSDI score >13(26,28).

The data collection from the questionnaires and clinical examinations were conducted in July 2016 in Cássia dos Coqueiros and from the end of June to August 2017 in Ribeirão Preto. As such, the whole research was conducted in the winter season in the state of São Paulo, Brazil.

The research followed the tenets of the Declaration of Helsinki, and the local Research Ethics Committee approved the research project. All participants were informed about the content and purpose of the research and their signed Free and Informed Consent Term form was obtained.

The GraphPad Prism 5.1 software was used for statistical calculations. For statistical analyses, we used the Fischer’s exact test, t-test, Mann-Whitney U-test, and percentage. The acceptable p value was <0.05 (95% CI).

Including the 600 participants from the 2 cities involved in the study, the mean age in those affected by pterygium was 65.6 ± 10.5 years, which indicated a significant difference from those without pterygium (61.2 ± 12.0 years); p=0.02, unpaired t-test. 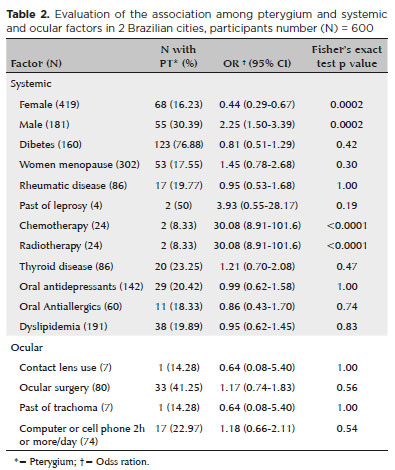 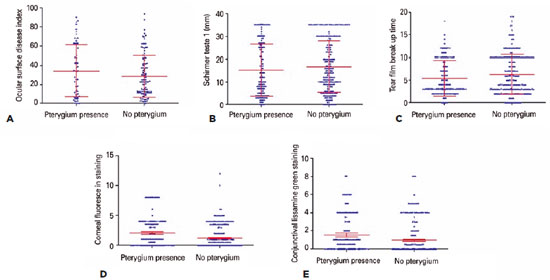 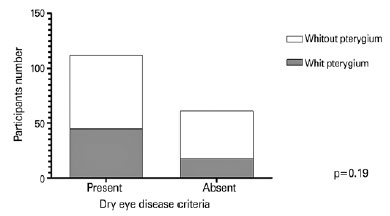 This study demonstrated a higher frequency of pterygium among men, which agrees with a large number of studies conducted across the world(5,10-12), including researches performed in Brazil(7,9). However, in contracts, a Chinese study noted a correlation between pterygium and female sex among participants aged ≥50 years(4). No statistically significant association was noted with pterygium and sex in a study conducted in India in 2013(6) as well as in 3 studies conducted in China(2,3,20), 1 in Japan (17), 1 in Indonesia(19), 1 in Spain(21), and 1 in Brazil(8). In the present study, interestingly, the protective effect of the female sex was lost by menopause when the frequency of pterygium reached nearer to that of men.

The average age of the participants with pterygium was significantly higher than the mean age of the participants without this ocular lesion, which agrees with the results of several other studies from across the world(2-5,16,21,23). However, no relationship was noted between older age and pterygium in several studies, such as that conducted in Australia in 2015(22) and that conducted in Brazil in 2006(8).

In the total sample, the most frequent location of typical pterygium lesion was nasal, as was expected, which agrees with the reposts of other epidemiological studies(2,22).

No statistical correlation was noted between pterygium and diabetes, which agrees with the results of the 3 studies conducted in China(2-4), 1 in Singapore(10), 1 in South Korea(14), and 1 in Spain(21).

Moreover, no statistical correlation was established among pterygium and rheumatic diseases, a history of leprosy, thyroid diseases, the use of antidepressants, a history of trachoma, past ocular surgeries (such as cataract and blepharoplasty), the use of contact lens, and the use of a computer or cell phone for at least 2 hours in a day, which are the factors that are otherwise not frequently investigated in the literature.

A recent population study conducted in China recorded that premature menopause is associated with the presence of pterygium of grade ≥2, which is different from the findings of the present study, in which no statistical correlation was recorded between pterygium and postmenopausal woman. Therefore, more studies are needed to justify the association reported in the present study, as there are no previous studies that investigated this relationship(29).

Among the 24 patients with a history of anti-neoplastic treatment, a positive correlation was noted among pterygium, chemotherapy, and radiotherapy (n=2, 8.3% of the 24 participants). The authors hence sought to investigate the association between pterygium and a history of treatment with chemotherapy and/or radiotherapy because this assessment had remained unexplored in previous studies. Moreover, these interventions have been associated with side effects that include dry eye. Although dry eye is an entirely common symptom among the adult population, the present study intended to identify more specific correlations. The possible mechanism of this association between chemotherapy or radiotherapy with pterygium must be dry eye and ocular surface chronic inflammation, albeit it requires further confirmation.

During the evaluation of the correlation between pterygium and DED criteria, no difference was noted between the pterygium group and the control group. However, an association was recorded with the staining tests CFLS and CGLS. Similarly, a study conducted in Spain in 2011 also noted no association with dry eye symptoms or similar signs, except for that by fluorescein staining(21). In contrast, a Chinese study in 2009 identified an association between pterygium and lower Schirmer’s test, tear breakup time, and the presence of dry eye symptoms(20).

The present study has some limitations: it includes differential diagnoses of lesions that mimic pterygium and that cannot be identified by ectoscopy or by examination under a slit lamp in addition to the issue of the lack of demographic information regarding UV exposure, work activity, and the educational levels of participants that allows comparison with previous studies and the identification of some possible confounding factors that have not been explored in this study.

The present study employed a questionnaire designed to investigate factors associated with DED, which did not include all the variables assessed in previous studies for pterygiu. Our results can hence mislead the association between exposure and outcome (cause and effect) and indicate as causes items that are only associated with the real causes. Future studies are therefore necessary to investigate these possibilities in further detail.

In conclusion, the frequency of pterygium in the 2 Brazilian populations was similar and high, approximately 20%, more frequently among men and older people. Fluorescein staining and white lissamine green staining were associated with pterygium. A positive correlation between pterygium and a history of chemotherapeutic and radiotherapeutic treatment was noted. However, there was a large discrepancy in the risk factors associated with pterygium, both in the epidemiological context (such as with respect to the sex and age) and clinical factors (such as diabetes and dyslipidemia) on comparing our findings with other studies, which emphasizes on the need for more comprehensive studies on this subject.