Facial nerve palsy is the most common cranial neuropathy that causes weakness or complete paralysis of facial muscles(1). With regard to the eye, facial nerve palsy can lead to asymmetrical facial appearance, incomplete eyelid closure, and even visual loss. Furthermore, the inability to blink adequately after facial nerve palsy may lead to ocular dryness(2). Recent studies suggest that a strong inverse relationship exists between facial nerve palsy and tear breakup time(3-5).

The meibomian gland secretion forms the lipid layer at the surface of the tear film, which prevents dry eye by reducing ocular surface water evaporation and the collapse of the tear film. Meibomian gland dysfunction (MGD) increases the evaporation of tear fluid and results in dry eye. Although MGD is often overlooked clinically, the obstructive form of MGD is thought to be a major cause of evaporative dry eye disease(6). In light of these findings, we hypothesized that the functional ocular changes encountered in facial nerve palsy alters the meibomian gland structure and reduces the number of functional meibomian glands, which leads to dry eye.

Therefore, in this study, we aimed to investigate MGD as a possible cause of dry eye in patients with facial nerve palsy. Furthermore, we also aimed to identify whether a relationship exists between the grades and durations of facial nerve palsy and MGD.

This prospective observational study included patients who were diagnosed as having unilateral facial nerve palsy between January 2016 and January 2020. The study was approved by the institutional review board of our hospital and adhered to the tenets of the Declaration of Helsinki. Written informed consent was obtained from all the patients. All the patients had isolated facial nerve palsy without evidence of other etiologies such as trauma, infections, inflammatory diseases, chronic diseases, and cranial pathologies. Patients with lid abnormalities such as entropion, ectropion, or retraction and a history of eyelid or lacrimal surgery were excluded from this study.

The following examinations were performed in all the patients: tear breakup time, fluorescein staining of the cornea, Schirmer 1 test, lid margin abnormality evaluation, meibomian gland expression measurement, and meibography. All the examinations were performed on both eyes affected by facial nerve palsy and paired normal eyes by a single clinician. The unaffected contralateral eyes were used as the control group for comparison. Facial nerve function and severity were assessed using the House-Brackmann grading system(7). Tear breakup time was measured by staining the tear film with sodium fluorescein dye and applying the film to the inferior temporal conjunctiva. After the subject was instructed to blink three times, the time interval between the last blink and the appearance of the first dry spots on the cornea was measured. This was repeated three times to obtain the average value. The evaluation and grading of superficial punctate keratopathy were performed using the scale reported by Miyata et al(8). After corneal fluorescein staining, the cornea was examined for any stain uptake and scored from 0 to 3. The total sum of the area of the superficial punctate keratopathy was graded as follows: 0 (none), 1 (less than one-third), 2 (between one-third to two-thirds), and 3 (more than two-thirds). The density was graded as follows: 0 (none), 1 (sparse), 2 (moderate), and 3 (high). The Schirmer 1 test was performed without anesthesia by placing the test strip on one-third of the lateral part of the lower eyelid for 5 min. Then, the strip was removed, and the amount of tears was measured in millimeters.

Lid margin abnormalities were scored from 0 to 4 according to the presence or absence of the following parameters: irregular lid margin, plugging of the meibomian gland orifices, vascular engorgement, or a shift in the Marx line(9). The Marx line is a fluorescein staining line that runs along the mucocutaneous junction of the lower lid. The Marx line was observed on slit-lamp biomicroscopy after fluorescein staining, and a score was assigned according to the following criteria as described by Yamaguchi et al.(10): 0, completely posterior to the glands; 1, less than half of the parts touching the glands; 2, most parts running through the glands; and 3, completely anterior to the glands. The Marx lines of the inner, middle, and outer thirds of the lower eyelid were scored separately, and the total score was defined as the sum of the scores on three portions of the eyelid. For the assessment of the meibomian gland expression level, digital pressure was applied to the central area of the lower lid. The degree of ease in expressing the meibomian gland secretion was graded from 0 to 3 as described by Shimazaki et al. previously (0, clear meibum easily expressed; 1, cloudy meibum expressed with mild pressure; 2, cloudy meibum expressed with more than moderate pressure; 3, cloudy meibum expressed with more than moderate pressure; and 4, meibum not expressed, even with hard pressure)(11).

Statistical analysis was performed with SPSS version 20.0 software for Windows (IBM Corporation, Armonk, NY). Continuous variables were expressed as mean and standard deviation, and categorical variables were expressed as number and percentages. The chi-square test was used to examine the relationship between the categorical variables. A paired samples t test was used to compare the clinical parameters between the affected and unaffected eyes. A Pearson correlation coefficient analysis was performed to assess the relationship between the grades and durations of facial nerve palsy and meibomian gland function. A p value <0.05 was considered statistically significant. 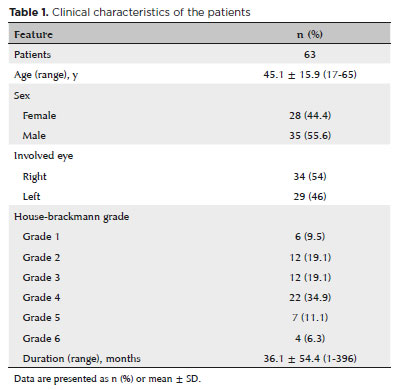 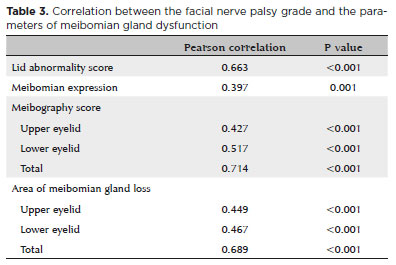 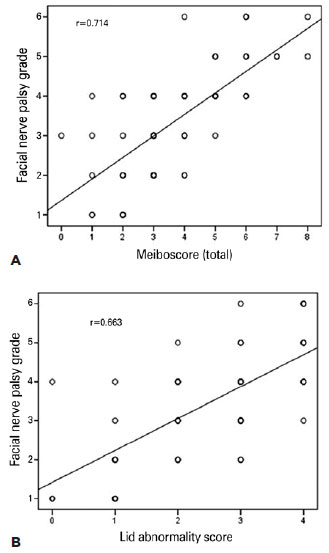 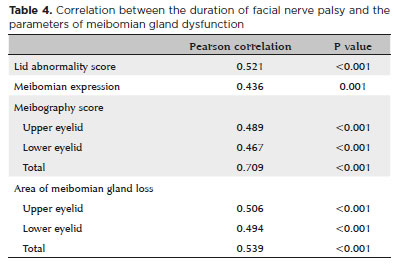 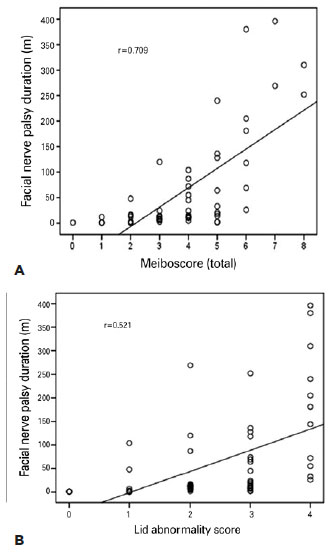 The increased Schirmer 1 scores and decreased tear breakup time in our study suggest that the main cause of dry eye disease in patients with facial nerve palsy is excessive evaporation rather than impaired lacrimal production. Unopposed pull of gravity on the surrounding paralyzed tissues, upper lid retraction, lagophthalmos, and impairment of the orbicularis oculi muscle all contribute to exposure keratitis and an increased risk of tear evaporation(17). Increased laxity of the orbicularis oculi muscle and medial canthal tendon causes involutional ectropion and subsequent eversion of the lacrimal punctum(17). Furthermore, loss of primary support mechanisms of the lower eyelid disrupts the pumping function of the lacrimal system and prevents the flow of tears in the normal lateral-to-medial direction(18). Loss of blinking reflex also impairs tear drainage into the tear ducts, causing leakage of tears accumulated in the sagging lower lid(18). Several studies revealed that MGD plays an important role in the development of dry eye disease(3-5). The lipid secretion of the meibomian glands coats the aqueous layer and provides tear film stability. If meibomian gland secretion is decreased due to obstruction, tears evaporate from the ocular surface faster than normal.

We found that the meibography scores and areas of meibomian gland loss in the patients with facial nerve palsy were significantly higher than those in the patients with normal eyelids. We also revealed that MGD in facial nerve palsy involved both of the upper and lower eyelids. Conforming to our findings, Shah et al. reported a strong relationship between facial nerve palsy and MGD(4). Similarly, Wan et al. found that facial nerve palsy is highly related to the development of MGD(5). The incidence rates of all the parameters constituting eyelid abnormalities were significantly higher in the eyes on the paralyzed side than in the normal eyes. This result is consistent with those of other studies in the literature(3-5). Although Takahashi and Kakizaki, found an increased incidence of irregular eyelid margin in the patients with facial nerve palsy (37.1% vs. 22.9%), the difference was not statistically significant (p=0.168)(3). They attributed this finding to hyperlacrimation and the late development of the morphological changes of MGD(3). Overall, when we evaluated our findings along with a literature review, MGD was believed to play an important role in the development of dry eye disease.

Decreased and weakened eyelid blinking is a possible mechanism for the development of MGD in patients with facial nerve palsy(17). In accordance with this theory, a recent study examined the association between incomplete blinking and MGD(5). During blinking, the meibomian glands are believed to act in a coordinated fashion with the mechanical forces of the pretarsal orbicularis and Riolan’s muscles. However, in the absence of blinking, stasis of lipid secretion can lead to disuse atrophy and eventual meibomian gland loss.

The present study has some limitations that warrant further consideration. The impact of various factors such as patient age, race, sex, systemic illnesses and cooperation, orbital fat prolapse, and tightness of the eyelids on meibography could not be ruled out. The present results thus lack control for confounding variables. Therefore, our results should not be interpreted as a causal relationship but rather as an association. Another limitation is the non-longitudinal design of the study, which decreased the power to detect other associations reliably. Although the present study was conducted prospectively, it did not involve repeated observations of the same variables. The patients were evaluated at one point in time, which may not provide definite information about the cause-and-effect relationships. Therefore, we could not know for sure if the patients had normal meibomian gland function before the onset of facial nerve palsy or if the facial nerve palsy caused the abnormal meibomian gland function. Furthermore, the tests used in this study failed to adequately determine whether the cause of the dry eye disease in facial nerve palsy is insufficient tear production or increased evaporation. Although MGD is the leading cause of evaporative dry eye disease, we could not confirm this precisely without performing additional tests such as tear film lipid layer interferometry and tear evaporimetry. A further limitation is the relatively small sample size, which means that caution is required when generalizing the results of this research study. Finally, the data collection and classification of the parameters were not blinded. The inability to blind the clinician to the side affected by palsy during the evaluation of the patients may have led to an observer bias.