Primary open-angle glaucoma (POAG) is characterized by loss of retinal ganglion cells, optic nerve damage, and consequently, irreversible loss of the visual field(1). An estimated 35-58 million people are affected by POAG worldwide, and this number is expected to increase up to 53 to 65.5 million by 2020 owing to the aging world population(2-3).

Although many mechanisms have been proposed, the pathophysiology of POAG and the factors that contribute to the worsening of the disease still remains obscure(4). Recent advances in genomic technologies and genome-wide association studies (GWAS) have greatly accelerated the discovery and understanding of genes and genomic regions associated with POAG and influence the quantitative endophenotype traits related to POAG pathogenesis(5). However, most studies have been conducted in European and Asian populations. Data regarding the influence of these genes in other populations are lacking.

TXNRD2 is on chromosome 22q11.21 and consists of 18 exons of relatively small size, with intron sizes ranging from 200 and 10,000 bp(6,7). In addition, TXNRD2 codes for thioredoxin reductase 2, a mitochondrial protein necessary for reducing the damage of reactive oxygen species (ROS) generated by oxidative phosphorylation and other mitochondrial functions(8,9).

The importance of studying the single-nucleotide polymorphism (SNP) in the thioredoxin reductase 2 (TXNRD2) gene (rs35934224) is due the strong association found between this SNP and POAG in a recent GWAS(6). In this study, Bailey et al. found a significant association of the T variant with POAG in European, Asian, and Oceanian populations, showing the protection of the T allele in relation to POAG (p=4.05 × 10-11)(6). In addition to POAG, the genetic variation in TXNRD2 was found to be associated with diabetic retinopathy(10), prostate cancer(11,12), gastric cancer(13), and colon and rectal cancers(14).

Whether this genetic protective factor is also found in more mixed-race Latin American populations is not yet known. Northeastern Brazil has a highly miscegenated population. Therefore, the aim of this study was to investigate the association of the SNP rs35934224 in the TXNRD2 gene with POAG in this population.

A total of 94 individuals with POAG were included in the present study. POAG was diagnosed if glaucoma optic neuropathy (GON) and defects in the visual field or retinal nerve fiber layer thickness, regardless of the IOP in one or both eyes, were found, on the basis of the following three criteria: (1) morphological changes in the optic nerve head characteristic of GON, with a cutoff cup-to-disk ratio of 0.7 to distinguish GON from healthy eyes or an asymmetry ≥0.2 between eyes, and the presence of localized defects in the RNFL and/or neuroretinal rim area; (2) at least two OCT images showing progressive retinal nerve fiber layer thinning or visual field defects corresponding to the RNFL thinning in the standard automated perimetry, considering glaucomatous visual field defects with a pattern standard deviation outside the 95% normal limits or a glaucoma hemifield test result >99% (Humphrey Swedish Interactive 24-2 SITA-FAST protocol); and (3) open and normally appearing angle of the anterior chamber in gonioscopy.

POAG was diagnosed in the patients before enrollment in the study. Patients who were using eye drops other than hypotensive medications after any ocular surgery and had <6 months of treatment with any glucocorticosteroid or immunosuppressive drugs were excluded from the study.

The control group consisted of 94 individuals without glaucomatous optic nerve neuropathy, with a cup-to-disk ratio of up to 0.5 and an IOP <18 mmHg. None of the healthy controls had evidence of any ocular diseases or autoimmune/autoinflammatory and systemic disorders matched by geographical region. Furthermore, patients with a familial history of glaucoma or blindness were excluded.

Written informed consent was obtained from all the participants, and the ethics committee for research of the University of Pernambuco, under protocol No. 56467316.8.0000.5207, approved all the methods used. All the study methods were performed in accordance with the provisions of the Declaration of Helsinki and Good Clinical Practice guidelines.

The statistical analysis of the data was performed using the SPSS version 22.0 statistical software package (SPSS, Inc., Chicago, IL, USA). Categorical variables were compared using the chi-square test, and the results are presented using odds ratios (ORs) with 95% confidence intervals (CIs). Sex and age variables were analyzed between the groups using the Student t test or Mann-Whitney U test for parametrically or non-parametrically distributed data as appropriate. The differences were considered statistically significant when the p value was <0.05.

On the basis of the genotypes CC and CT/TT of TXNRD2 rs35934224, the glaucoma group was categorized according to baseline characteristics. The analysis between the groups did not show statistically significant differences (Table 2). 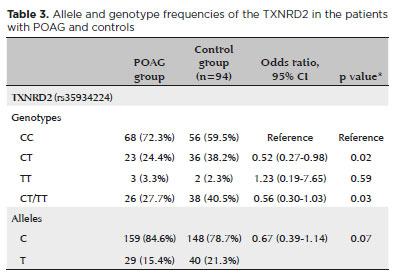 In the present study, we found a significant association between the CT genotype in the TXNRD2 gene (rs35934224) with protection to POAG in a Brazilian admixed population(15). On the other hand, we observed a higher frequency of the CC genotype in the POAG group than in the control group.

Oxidative stress and antioxidant systems are important in ocular tissue. Several studies have demonstrated a significant contribution of oxidative stress to the POAG pathogenesis(16-21). In addition, a recent meta-analysis demonstrated an overall increase in oxidative stress molecules in glaucoma, both in the serum and aqueous humor. On the other hand, the authors observed decreases in the levels of some antioxidant markers, which suggests that reduction in ROS could be neuroprotective(18). The mitochondrial thioredoxin reductase (TXNRD) had a central importance for mitochondrial scavenging of ROS(22). It is well established that antioxidant molecules could be implicated in the pathogenesis of glaucoma because oxidative stress might play a causal role in the disease(18,23,24). In addition, polymorphisms in molecules associated to antioxidant systems(25) have been reported in patients with POAG(11,26,27).

Herein, the CT genotype was associated with protection from POAG, while the CC genotype was more prevalent in the POAG group. Our results corroborate, at least in part, the association found in the GWAS study performed by Bailey et al.(6). In this study, they found a significant association between the rs35934224 allele T with protection from POAG (OR 0.77), besides demonstrating the TXNRD2 expression in retinal ganglion cells and the optic nerve head in normal human ocular tissue(6).

The role of TXNRD2 in the glaucoma pathogenesis has been evidenced through an experimental glaucoma model in which overexpression of thioredoxin 2, the substrate of thioredoxin reductase 2, increased retinal ganglion cell survival(29). Thus, reduction of ROS levels by TXNRD2 could prevent glaucoma. In addition, the SNP rs35934224 is located in an inter-exon region and is in linkage disequilibrium with other SNPs in regulatory regions such as the 3’-UTR and promoter regions; thus, this nucleotide change may affect the expression levels of the molecule.

In summary, our data suggest the association between the TXNRD2 gene polymorphism (rs35934224) and POAG in an admixed Brazilian population. However, our study has some limitations such as the small number of subjects enrolled and the lack of functional characterization of TXNRD2. However, we believe that the preliminary results reported herein open new perspectives for the evaluation of the gene in Latin American populations. Further cross-sectional studies with larger cohorts in different populations are necessary to elucidate the potential use of TXNRD2 in clinical practice.