The incidence of OSSN is low in high-latitude countries in the northern hemisphere, but the incidence increases in equatorial areas(1-3). OSSN occurs predominantly in males in the seventh decade of life and is predominantly localized to the corneal limbus(1,2).

The management of OSSN involves the use of topical chemotherapeutic agents such as mitomycin C (MMC), 5-fluorouracil (5-FU), and interferon alfa-2b (IFN)(1,4). Topical IFN alfa-2b is useful as adjuvant or primary treatment in the management of OSSN(1,4-7). The gold standard for OSSN treatment is still surgery(1); however, surgery without adjuvant treatment is associated with high recurrence rates. Surgery may also maim the ocular surface in extensive cases that invade the limbus(6-8). Topical IFN alfa-2b is an ideal medication for the treatment of OSSN because it is relatively nontoxic(4,9-11). IFN alfa-2b is a highly purified protein that binds to cell receptors and triggers the synthesis of effector proteins that inhibit cell growth and cell differentiation in an antineoplastic action, activate immunocompetent cells, and regulate oncogenes. IFN also has an antiviral effect that involves a natural defense mechanism(9-11). Many previous studies focused on its efficacy and safety for OSSN treatment(1,2,4-8,12-15). The drawback of this treatment is its long treatment duration of 8-16 weeks(1,5,6,8,9). The treatment time may increase if the topical administration of IFN alfa-2b is continued 1 or 2 months after resolution, with a mean total therapy duration of 4 months(5). Furthermore, whether the treatment duration depends on the initial extent of the tumor or on the tumor volume is unclear.

On the basis of these considerations, the aim of this study was to determine if the initial tumor size, in small- and medium-sized OSSNs, correlates with the time to regression after topical IFN therapy.

A retrospective study was performed in 15 consecutive patients who were diagnosed as having corneo-limbal OSSN and treated with topical IFN alfa-2b (1 million IU/mL) four times a day, from 2009 to 2018, at the Ocular Surface Unit of the Ophthalmology Department of the University Hospital Arnau de Vilanova de Lleida. Treatment was continued until the lesion was fully resolved. The diagnosis and resolution of the lesion were both clinically determined. Resolution was defined as the total disappearance of the OSSN based on clinical observation. No further diagnostic methods were performed. Informed consent was obtained from each patient prior to treatment. The study was conducted in accordance with the ethical standards and adhered to the tenets of the Declaration of Helsinki. The patients were fully informed about the examinations, treatments, and possible interventions. Written consent was obtained from all the subjects. All the tumors were of stage T1 or T2 according to the 8th edition of the Classification of the American Joint Committee on Cancer(9,16). All the OSSN cases included in the study had corneo-limbal involvement. The initial extension of OSSN was measured in square millimeters using the program ImageJ (LOCI, University of Wisconsin). To set the scale, the horizontal or vertical white-to-white (W-W) distance was used in each case at our convenience, with a vertical W-W distance of 10.63 mm and a horizontal W-W distance of 11.46 mm as references, according to previous studies on mean corneal diameter in adult population(17). After setting the scale, the tumor perimeter was outlined using the computer mouse, and the area was calculated by the program (Figure 1). This task was carried out in all the cases by the same blinded examiner. The measurements were determined from photographs taken at the beginning of the treatment and in the consecutive visits. Only photographs in which >75% of the corneal diameter was visible were included in the study to correctly estimate the scale and, therefore, the actual extension of the tumor. The purpose of this method was to obtain the maximum objective measure of the tumor extension before and in the consecutive visits after treatment. Tumor extension was measured at the beginning of the treatment (day 0) and after 15 days to record any increase in tumor volume. 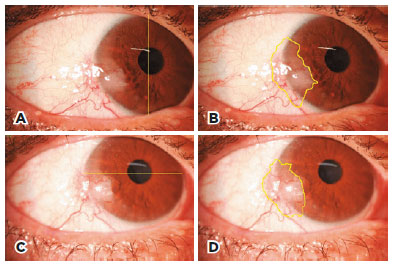 The patients were followed up every 15 days using photographs to verify the treatment response, establish if complete tumor resolution had occurred, determine the time required for tumor resolution, and record any increase in tumor volume. After observing complete resolution of the tumor, IFN alfa-2b drops were stopped immediately, and a follow-up control was made 6 and 12 months after.

Fifteen patients with corneo-limbal OSSN involvement were included in the study. The median patient age was 70.8 years. Eleven patients (73%) were men, and 4 (26%) were women (Table 1). All the patients had Caucasian (Spanish) ancestry. The mean tumor extension was 26.71 mm2 (median, 23.23 mm2; standard deviation ± 17.21 mm2). Complete regression was observed in all the cases after a mean time of 77 days of treatment (median, 60 days; standard deviation ± 32 days; Table 2). When comparing tumor extensions on day 0 of treatment and after 15 days, as measurements were taken in square millimeters, small differences may not be significant, so we established the line of significant increase or decrease in tumor extension at 2 mm2. Taking this into consideration, during the first 2 weeks, 2 cases showed an increase in tumor extension, 8 showed a decrease in tumor extension, and 5 had the same extension (Tables 3 and 4). When the time to tumor regression was evaluated on the basis of the initial size on the ocular surface, no statistically significant correlation was observed (Spearman test: p=0.347; Figure 2). Nevertheless, the smallest tumor appeared to regress faster than the others, and the second largest tumor regressed more slowly than any other tumor (Figure 2). No recurrences were observed in any case among the follow-up controls at 6 and 12 months after complete tumor regression. 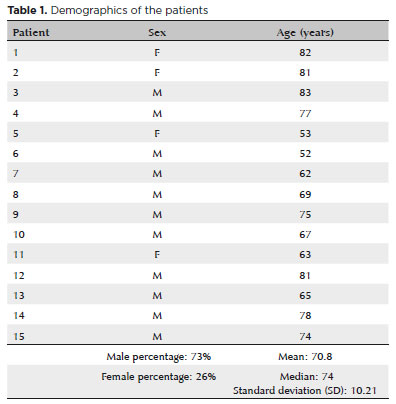 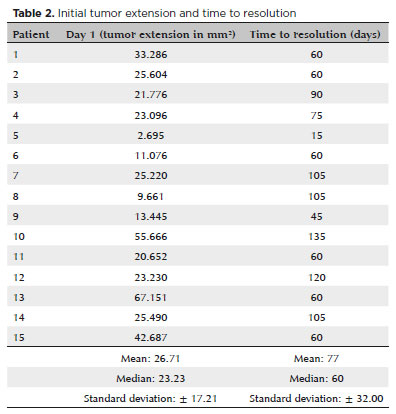 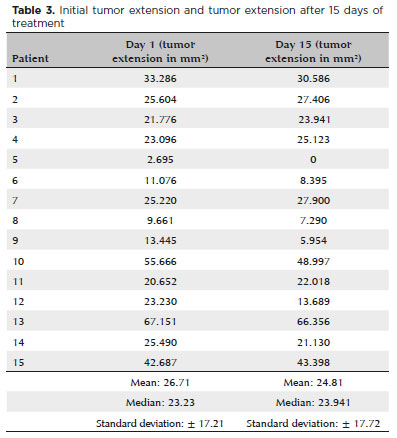 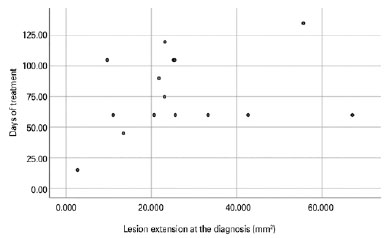 Topical IFN alfa-2b (1 million IU/mL) is effective for achieving complete tumor regression as a primary treatment for OSSN(4-9,12-15,18-20). Tumor regression occurred in 100% of the cases in the present study. The regression rate oscillates between 70% and 100% in other series of cases(1,5,12-15,19,21). Differences in stability among the IFN eye drops could explain this variability(8), although no studies have investigated IFN eye drop stability and the degree of preservation of the principal active component. Moreover, topical IFN alfa-2b eye drops have been reported to be effective in well-delimited and extensive cases(7,9,18-20). No significant differences in the rate of complete regression of OSSN have been reported according to dose, which can range from 1 to 3 million IU/mL(21). The 1-million IU/mL dose is used most commonly.

The main advantage of topical IFN is that mutilating surgery can be avoided in cases with lesions that extensively affect the limbus. However, the treatment duration can be long(1,4,5). The mean treatment duration in our study was 77 days, which agrees with certain studies that reported durations of 75-180 days(1,4,5,12-15,18-20). However, other studies reported longer durations(9,22). Treatment duration has not been associated to tumor extension. The possibility that a larger lesion may require a longer time to resolve has been suggested previously(12). It is logical to assume that a widely extensive tumor will require a longer treatment period, although this remains to be proven. The aim of the present study was to corroborate this hypothesis.

This study is the first to prove the primary hypothesis on the relationship between the initial tumor size and time to complete regression for OSSN treated with IFN alfa-2b. In previous reports, the tumor size of OSSN has been measured using limbal clock hours affected, the basal diameter in mm or a combination of the two major diameters(9,12,15,19,22). In another study, tumor size was measured by calculating the surface area using geometric formulas for areas depending on the shape of the lesion(9). In our work, we calculated the surface area by outlining exactly the shape of the tumor on an image of the eye, achieving a much more objective, exact, and reproducible measurement. The treatment response in our study was monitored every 15 days, which allowed us to estimate very approximately the exact time to tumor regression in each case.

For these reasons, the present study shows, with more accurate measurements, that by using the same standard dose in all patients, the treatment duration did not depend on the initial tumor extension. A previous study that included 23 cases of OSSN treated with IFN alfa-2b also reported that tumor extension did not correlate with the time taken to respond to topical IFN(9). However, a different method of measurement was used, and in our study, the frequency of follow-up visits for monitoring the treatment response was higher in comparison with that in the other work (15 days vs. 3-6 months). For these reasons, the results of both studies are not comparable.

Kim et al. observed a median time of 5 months to complete tumor resolution in 7 cases of giant OSSN when treating them with topical IFN(22), whereas we observed a median time of 60 days in a sample of OSSN cases that did not include any giant tumor. Our study included tumor sizes that are typically found in clinical practice, not including giant OSSNs, which may have a different nature, so the results are not comparable.

Although some authors suggest the administration of IFN alfa-2b in subconjunctival injections(5,6), we decided to perform treatment with topical drops only owing to its simplicity and comfort for the patient.

An increase in tumor volume at the beginning of treatment was previously reported(18). In addition, spontaneous intratumoral bleeding after 3 weeks of topical therapy was reported in one patient(15). In the present study, the extension increase reported in two patients resolved completely. Tumor extension increase may be secondary to a local immune reaction, which does not require the suspension of treatment. Although some authors decide to taper the frequency of IFN alfa-2b after clinical resolution(6), in our study, we stopped the treatment immediately after clinical resolution and did not observe any recurrence during the follow-ups at 6 and 12 months after complete tumor regression.

This study has some limitations. First, it was difficult to recruit a large number of patients with OSSN who were treated with IFN alfa-2b because of the low prevalence of these tumors in high-latitude countries (0.13-1.9 cases per 100,000 population)(1,2,23). Second, the study only assessed tumor extension, and not the thickness of the lesion. Thickness measurements with optical coherence tomography (OCT) might be interesting for further studies. Third, diagnosis and resolution were clinically determined; no further methods such as impression cytology or staining were performed.

In conclusion, our study suggests that the duration of topical IFN alfa-2b treatment required does not depend on the initial tumor size of small- to medium-sized OSSNs.