Ophthalmological manifestations of the Schuurs-Hoeijmakers syndrome: a case report

This is a case report of a 2-year-old male patient with cognitive delay, facial abnormalities, and microcornea in the right eye, who was referred for ophthalmological investigation. The initial ophthalmological examination revealed hypertelorism, epicanthus, nystagmus, esotropia, and microcornea in the right eye. The examination under anesthesia revealed microphthalmia in the right eye, and iris, retina, and optic nerve coloboma in both eyes. Whole exome sequencing revealed evidence of a heterozygotic pathogenic variant in PACS1. The PACS1 pathogenic variant in association with the clinical findings confirmed the diagnosis of Schuurs-Hoeijmakers syndrome. To our knowledge, this is the first report to describe microcornea and microphthalmia as additional ocular manifestations of Schuurs-Hoeijmakers syndrome.

The initial report revealed that SHS is caused by a heterozygote pathogenic variant in the PACS1 gene, which, according to the results of animal studies, leads to the substitution of amino acids (arginine for tryptophan) in the furin-binding region of the protein and exerts a negative dominant effect(1).

The pathophysiology of the PACS1 protein mutation, studied in vitro and in vivo, showed that this gene is essential for the formation of craniofacial structures, and its dysfunction leads to neural crest migration deficiency. Therefore, the defective function of the PACS1 protein can cause intellectual delay, abnormal facial features, and ophthalmic conditions(1,3).

The facial changes include highly arched eyebrows, long eyelashes, hypertelorism, down-slanting palpebral fissures, ptosis, rounded nasal tip, wide mouth with corners that point downward, widely spaced teeth, and low-set ears(1,3,4). With regard to the ophthalmological manifestations of SHS, nystagmus, strabismus, and coloboma of the iris, optic nerve, and retina were described(3,4). In addition, owing to the PACS1 pathogenic variant, other physical changes may occur, including heart and brain malformations, and cryptorchidism in male patients(3).

A 2-year-old patient was referred to our pediatric ophthalmology department for further assessment and investigation. The mother reported asymmetry of the child’s eyes and nystagmus. The child’s past medical history included intellectual delay. The mother denied any similar cases in the family. 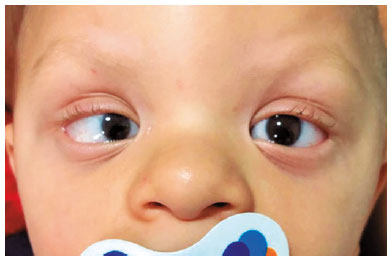 Figure 1. Low ear lobe implantation, hypertelorism, epicanthus, microcornea in the right eye, and round nasal tip in the child with Schuurs-Hoeijmakers syndrome.

The patient’s best corrected visual acuity measured using Teller’s visual acuity cards showed high contrast (0.23 cy/cm at 83 cm) in the oculus dexter (OD) and 20/270 (3.2 cy/cm at 83 cm) in the oculus sinister (OS). The patient was examined under sedation for further investigation. The cycloplegic refraction was 13.00 DE in the OD, and -2.25 and -0.50 at 60° in the OS. The intraocular pressure (Perkins) was 8 mmHg in the OD and 14 mmHg in the OS. The corneal white-to-white measurement was 7 mm in the OD and 10 mm in the OS, indicating a microcornea in the OD (Figure 2).

The anterior segment examinations revealed colobomas of the iris, optic nerve, and retina in the inferior quadrant of the oculus uterque (Figure 3). Ocular ultrasonography revealed no retrobulbar cyst, and the axial length was 20 mm in the OD and 22 mm in the OS. 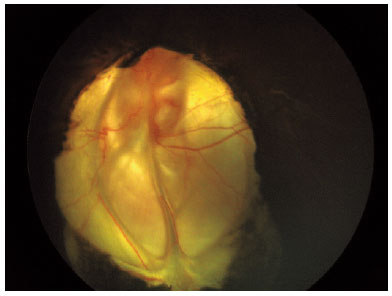 Figure 3. Color fundus image of the left eye showing the coloboma of the optic nerve and retina.

The patient underwent complete exome sequencing, which revealed a heterozygotic pathogenic variant in the PACS1 gene (NM_018026.3:c.607C>T; p.Arg203TTrp in Chr11:6597867). Confirmation of the PACS1 pathogenic variant in addition to the clinical manifestations such as intellectual delay, hypertelorism, and colobomas of the iris, optic nerve, and retina confirmed the diagnosis of SHS.

We present the case of a 2-year-old Brazilian boy with SHS. Although this syndrome has been previously reported in the Netherlands, Germany, India, and Japan, to our knowledge, this is the first SHS case reported in the Americas(1-5).

As in the previously reported cases, our patient presented the typical manifestations of SHS, including intellectual delay and facial features such as low ear lobe implantation, rounded nasal tip, hypertelorism, and epicanthus(1,3-5). Moreover, our child presented the well-known ocular manifestations of this syndrome, including nystagmus, strabismus, and colobomas of the iris, optic nerve, and retina(1,3). Nevertheless, in addition to these findings, our child also presented unilateral microcornea and microphthalmia. These findings were responsible for the significant anisometropia and amblyopia identified in the child and have not been previously reported in the literature in association with SHS.

The retina and optic nerve colobomas herein described have a wide range of differential diagnosis, including Walker-Warburg, CHARGE (coloboma, heart anomaly, choanal atresia, retardation, and genital and ear anomalies), Aicardi, and Knobloch syndromes(6). Therefore, genetic investigation is crucial for proper management and diagnosis of these cases. In addition, detection of the optic nerve and retinal colobomas is important to determine their relationships with retinal detachment, as up to 60% of these eyes have been estimated to progress to retinal detachment by the time patients reach the age of 30-40 years(6,7). This occurs when a break is formed at the margins of the coloboma that causes the vitreous to access the subretinal space and detach the retina.

To our knowledge, this is the first case report to describe microcornea and microphthalmia as novel findings of SHS and a SHS case in the Americas. This study provides awareness of the risk of amblyopia in SHS and suggests close monitoring of patients for early detection of possible retinal detachments.