Switch to aflibercept in the treatment of neovascular age-related macular degeneration: 30-month results

Age-related macular degeneration (AMD) is a chronic degenerative disease and the leading cause of blindness in elderly individuals living in developed countries(1). Intravitreal anti-vascular endothelial growth factor (VEGF) agents have become the gold standard in the treatment of neovascular AMD based on the understanding that VEGF plays a key role in age-related AMD neovascularization(2).

Several multicenter studies have demonstrated the efficacy and safety of intravitreal ranibizumab treatment in n-AMD(3-5). Although monthly ranibizumab or pro re nata (PRN) use was found to preserve visual acuity in 90% of patients, increase in visual acuity was reported in 30% of patients(3-5). Despite the positive results reported in multicenter trials, AMD remains a chronic disease requiring long-term follow-up and recurrent intravitreal injections. Patients treated with ranibizumab may have persistent edema or reactivation of the disease despite repeated intravitreal injections(6).

Aflibercept (Eylea®; Regeneron Pharmaceuticals, Tarrytown, NY, USA) is one of the anti-VEGF agents exhibiting a higher affinity to VEGF, a longer half-life, and the capability of inhibiting not only VEGF-A, which is also inhibited by ranibizumab, but also VEGF-B and placental growth factor(7-10). Based on the result of VIEW 1 and 2 studies, aflibercept was approved by the Food and Drug Administration (FDA) for the treatment of n-AMD(11).

Switching the anti-VEGF agent is a commonly used approach in cases with persistent fluid or multiple recurrences during ranibizumab treatment(12,13). Some clinical studies report that refractory patients who were switched to aflibercept from bevacizumab/ranibizumab had better functional and anatomical outcomes(14,15). We had also previously reported the 18-month outcomes of patients with n-AMD resistant to ranibizumab treatment who were switched to aflibercept(16).

In the present study, we evaluated the visual and anatomical outcomes of switching from ranibizumab to aflibercept therapy in patients with n-AMD at 30 months.

In this retrospective study, we reviewed the medical records of all patients with n-AMD treated at Afyon Kocatepe University Hospital, Turkey, a tertiary care center, between January 2014 and June 2018. Our study was approved by the local Ethical Committee and conducted in accordance with the Declaration of Helsinki. Written informed consent was obtained from all study participants. Patients with a known diagnosis of n-AMD who were resistant to intravitreal ranibizumab injection with PRN regimen and switched to aflibercept treatment were included in this study.

Inclusion criteria for our study were as follows: the presence of n-AMD previously treated with intravitreal ranibizumab that was switched to intravitreal aflibercept, persistent intraretinal or subretinal fluid, a minimum of 6 ranibizumab injections with PRN regimen before the transition, the last injection of ranibizumab being administered within 28-35 days of switching to aflibercept, and at least 30 months of follow-up after the switch to aflibercept. Exclusion criteria were history of vitrectomy, choroidal neovascularization (CNV) lesions secondary to causes other than AMD, the presence of -6.00 D or greater myopia, uncontrolled glaucoma, uveitis, or any other ocular disease that could potentially confound the assessment of safety and/or efficacy of treatment.

After switching from ranibizumab, all patients received a loading dose of 3 monthly aflibercept injections (2 mg/0.05 ml) and were followed up monthly. Retreatment with a single aflibercept injection was performed on the basis of any of the following findings: visual acuity loss of at least 5 letters with SD-OCT evidence of fluid in the macula, persistent or recurrent intraretinal or subretinal fluid in SD-OCT, or new subretinal hemorrhage from CNV.

Demographic characteristics of the patients were recorded. The primary outcomes of the study were variations in BCVA and central macular thickness (CMT) after switching to aflibercept at 0, 6, 12, 18, and 30 months and the frequency of aflibercept injections.

The obtained data were analyzed using the statistical package program (SPSS, version 18.0, SPSS, Chicago, USA). The distribution of variables was evaluated using the Kolmogorov-Smirnov test. Paired t-test was used to compare the measurements obtained before and during injections. The evaluations were made at the 95% confidence interval, and p<0.05 was considered to be statistically significant. 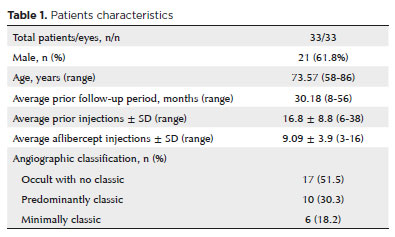 The CMT and BCVA measurements from baseline to 30 months in all patients are presented in table 2. A significant decrease in CMT was observed at 6, 12, 18, and 30 months (p=0.01, p=0.03, p=0.05, p=0.05, p<0.001, respectively). BCVA measurements showed no statistically significant difference during IVA treatment (p=0.07, p=0.36, p=0.34, p=0.81, p=0.58, respectively). The last SD-OCT imaging obtained at the 30th month showed no subretinal or intraretinal fluid in 23 patients (69.7%). During the study period, neither systemic complications such as cardiovascular or cerebrovascular events nor ocular complications such as endophthalmitis, vitreous hemorrhage, retinal detachment, and sustained IOP increase were observed.

This study demonstrated that patients with n-AMD who were unresponsive to ranibizumab treatment and had persistent fluid or recurrence and were switched to intravitreal aflibercept treatment had anatomical improvement of the macula, which continued throughout the 30-month follow-up period. However, the improvement in visual acuity was not as successful as the anatomical improvement.

Several reasons may be proposed to explain the anatomical improvement after the transition to aflibercept treatment. The first concern could be the pharmacodynamics of the drug. Tachyphylaxis, defined as a diminished therapeutic response to a pharmacologic agent following repeated administrations over time, to ranibizumab may have developed; therefore, there may be a lack of response to the drug despite the high drug concentration attained with frequent repeated injections in short time intervals(17). However, the drug may regain its efficacy when treatment is suspended for a short period of time. Another cause may be the development of tolerance to ranibizumab, wherein long-term use may lead to a significant decrease in the extent and duration of drug efficacy. Unlike tachyphylaxis, drug efficacy cannot be regained by suspending treatment. One study demonstrated that 81% of patients with tachyphylaxis who were switched from bevacizumab to ranibizumab showed a positive response(18). Furthermore, antibodies against the injected agent may have developed in patients who developed a local or systemic immune response after intravitreal injections. Studies also suggest that chronic VEGF blockage leads to excessive macrophage-mediated VEGF production in choroidal neovascular tissue(19,20).

Pharmacological structure of the molecule may also be one of the causes for the anatomical improvement after the switch to aflibercept. Although ranibizumab is a human IgG1 isotype, the integration of VEGF receptors 1 and 2 and IgG crystalline fragments causes the monoclonal antibody aflibercept to exhibit 100 times higher VEGF-A-binding affinity(21,22). Aflibercept also inhibits other factors such as VEGF-B and placental growth factor that affect neovascularization(7-9). It has also been demonstrated that aflibercept has a half-life of 7.13 days in vitreous fluid and an intraocular duration of action of 48-80 days, which is longer than those of ranibizumab (vitreous half-life 4.75 days, intraocular duration of action 28-67 days)(10).

Aflibercept has also been reported to have longer duration and higher binding affinity, and therefore lower dose and fewer injections are required(24). Similarly, in our study, the average number of injections was 16 before the switch to aflibercept and 9 after the switch, despite the similar mean follow-up period(21-23).

Although some studies have reported visual improvement after the switch, several studies report the opposite(24-27). In our study, although the improvement in retinal thickness was apparent, this was not the case in terms of visual function. This inconsistency between the anatomical and visual outcomes might be explained by the chronic structural changes of the macula and the loss of foveal photoreceptors. The literature shows that intravitreal injections used as initial treatment for n-AMD lead to visual improvement that is later followed by a plateau stage, in which chronic degeneration of photoreceptors does not allow visual improvement to accompany monthly injections(28). On the other hand, chronic intrafoveal fluid has negative effects on the cell morphology and function of photoreceptors(26,28). Long-term use of anti-VEGF may also increase the risk of geographical atrophy(28). In our study, 23 (69.7%) patients who were followed up for 30 months had dry macula in their final examination, and 3 (13.1%) of these patients had developed geographic atrophy. All these factors may have contributed to the disappointing level of visual recovery, although a larger series of studies is necessary to support our results.

Possible limitations of our study were the small sample size of patients and the PRN protocol of aflibercept administration. However, we believe that the results obtained from the prospective planning of the study protocol and the long-term follow-up of patients will contribute to the literature.

In conclusion, switching to aflibercept treatment resulted in anatomical recovery in the initial months of therapy that continued for a long period of time in patients with n-AMD who had recurrence or were unresponsive to intravitreal ranibizumab, but there was no functional improvement.