PURPOSE: To identify the lymphatic vessels in orbital specimens from human cadavers using light microscopy and immunohistochemical analysis.
METHODS: A postmortem study included 10 orbital specimens from 10 human cadavers. The orbital specimens were obtained no later than 12 hours after death. The orbital specimens were dissected into lacrimal gland, optic nerve, fat tissue, and oculomotor muscles. The histologic criteria to qualify as a lymphatic vessel were thin-walled channels of endothelium without a well-developed basal membrane and with an erythrocyte-free, irregular lumen. The immunohistochemical criteria were irregularly shaped, thin-walled vessels with an erythrocyte-free, irregular lumen and immunopositivity for podoplanin D2-40.
RESULTS: The lacrimal gland, optic nerve, fat tissue, and extraocular muscle sections were positively stained with podoplanin D2-40.
CONCLUSIONS: This study demonstrated lymphatic vessels in the human orbit, more precisely, in the lacrimal gland, dura mater of the optic nerve, adipose tissue, and extrinsic oculomotor muscles via light microscopy and immunohistochemistry.

The human orbit, an ocular adnexa richly vascularized with blood vessels, is a space bounded by rigid bones and fascial sheaths(1,2). The orbital blood capillaries are unfenestrated and carry proteins into the extravascular space continuously; however, these proteins are not readily reabsorbed owing to the concentration gradient(1,2). Thus, this protein-rich interstitial fluid must leave the orbit and be returned to the vascular compartment to avoid an increase in the intraorbital pressure.

Several studies have shown that lymphatic vessels may play an important role in various disorders(3-15). A better understanding of the orbital lymphatic system may significantly increase our knowledge of immune-associated orbital diseases, such as orbital inflammatory diseases and Graves’ ophthalmopathy, and the spread of malignant neoplasms, including carcinoma, lymphoma, and melanoma.

The purpose of this study was to determine whether lymphatic vessels are present in orbital specimens from human cadavers, with special regard to the lacrimal gland, optic nerve, fat tissue, and extraocular muscles, using light microscopy and immunohistochemical analysis.

Information was collected about the age and gender of all subjects.

Immunohistochemical analysis was performed on 4-µm-thick paraffin sections using the peroxidase-labeled streptavidin-biotin method and an LSAB-Plus Kit according to the manufacturer’s instructions (Dako, Glostrup, Denmark). The paraffin sections were incubated with primary antibody dilutions, biotinylated link antibody, and peroxidase-conjugated streptavidin for 30 min each. The 3-chromogenic substrate 3-amino-9-ethyl carbazole was applied, and the samples were stained with Mayer’s hemalum.

Informed consent was obtained for autopsy, orbital exenteration, histopathologic examination, and immunohistochemical analysis. The study was in compliance with the rules of the local research ethics committee and the tenets of the Declaration of Helsinki for experiments involving human tissues.

The study included seven male and three female subjects, with four right and six left orbits. The mean age was 65.3 years, with a range of 33 to 102 years. 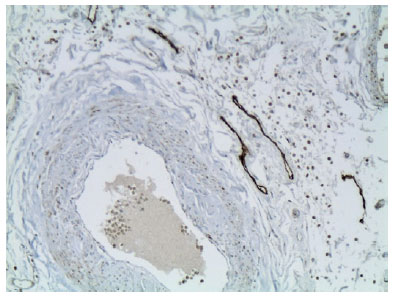 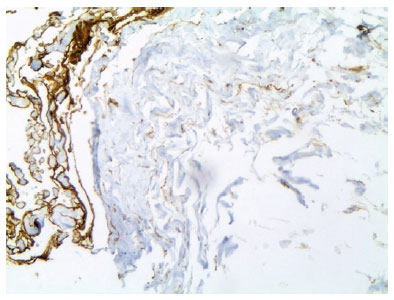 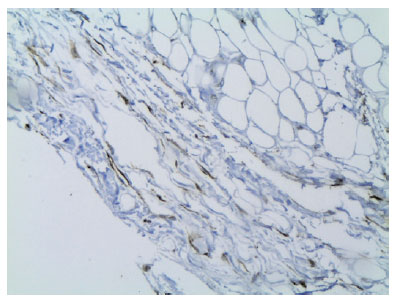 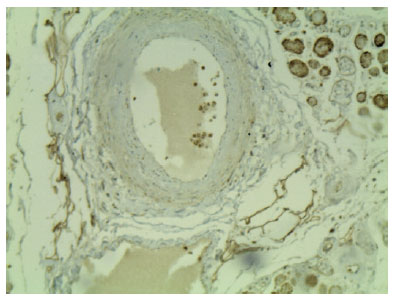 The presence of lymphatic vessels in the human lacrimal gland was suggested by light microscopy in 1993(7,10). The findings of the present study may contribute to a better understanding of the immune-mediated inflammatory diseases of the lacrimal gland and the spread of malignant neoplasms from and to the lacrimal glands(5,6,11,12).

Some studies have indicated the role of the lymphatic vessels in the pathogenesis of inflammatory diseases, such as dry eye, primary Sjögren’s syndrome, and idiopathic dacryoadenitis. Lymphangiogenesis has been described in patients with dry eye and primary Sjögren’s syndrome(11,12). A case series of idiopathic dacryoadenitis reported a possible pathogenic role of lymphoid neogenesis in lacrimal gland inflammation with lymphocytic aggregates(13). Immunoglobulin G 4-related disease with involvement of the lacrimal glands, the mucosa associated-lymphoid tissues, and the lymph nodes is also characterized by lymphoid neogenesis with lymphocytic follicles(5). Lymphatic vessels probably contribute to protecting the lacrimal glands against inflammation by providing a pathway for immune cells from the main lacrimal glands to the lymph nodes.

A research group has demonstrated the role of lymphangiogenesis in metastasis from the parotid gland and other regions(14). These results may provide new therapeutic approaches to inhibiting metastasis(15,16). Lymphatic neovascularization may be the main pathway for local and distant metastases of carcinomas and lymphomas from and to the lacrimal glands(16). Chemotherapeutic agents may cause dry eye and epiphora as adverse effects, and therefore an adequate ophthalmological evaluation is mandatory during treatment with these agents.

Lymphatic vessels were observed by light microscopy, electron microscopy, and immunohistochemistry surrounding the optic nerve, more precisely, in the dura mater(7,8). In humans, orbital lymphatic and blood vessels were first distinguished by morphologic criteria with specific 5’-Nase staining(10). Some authors have reported the same finding with D2-40(9,17), and others have provided information on the importance of this immunohistochemical antibody as a prognostic factor of invasion by tumors, including gliomas and meningiomas(18-20), which are the most common optic nerve neoplasms.

Some authors have identified lymphatic vessels in orbital fat tissue from patients with idiopathic orbital inflammation and Graves’ orbitopathy by light microscopy and immunohistochemistry, respectively(21,22). Lymphatic vessels have been described in all regions of the human body with adipose tissue except the orbital fat, which may be explained by the difficulty involved in the fixation of adipose tissue.

Benign orbital lesions, such as lymphangiomas, consist of abnormal lymphatic vessels and are frequently treated by surgical excision; however, most patients have multiple local recurrences(23,24). Thus, new antilymphangiogenic therapies may be helpful in decreasing the local recurrence rates of these lesions.

Primary orbital malignant neoplasms are usually spread by lymphatic pathways. In addition, the human orbit may be affected by distant malignant tumors, such as lymphomas and melanomas(25). Some authors have shown an association between tumor-related lymphangiogenesis and the increased risk of orbital invasion in squamous cell carcinoma and melanoma of the conjunctiva(4,26). These findings may provide new therapeutic options for inhibiting metastases to and from the orbit(2).