Behçet disease is a chronic, multisystemic, autoinflammatory disease that is highly prevalent in countries along the ancient Silk Road. It is characterized by immune-mediated vasculitis that can affect blood vessels of any size in all organ systems. Ocular inflammation is most commonly in the form of relapsing, remitting uveitis and develops in >70% of patients(1).

The current gold standard for documentation and monitoring of posterior segment involvement in Behçet disease is fluorescein angiography as it can easily detect retinal vascular leakage, retinal ischemia, and macular edema(2). However, it is an invasive procedure, requiring injection of an exogenous dye, and limited in its depth resolution(2,3).

Optical coherence tomography angiography (OCT-A) has recently become an excellent tool to obtain high resolution en face images of the retinal and choroidal microvasculature and analyze changes in the superficial capillary plexus (SCP), deep capillary plexus (DCP), and choriocapillaris separately(4). Both qualitative and quantitative changes within the retinal microvasculature can be assessed with OCT-A. Although its role in the evaluation of retinal vascular diseases, such as diabetic retinopathy, retinal venous occlusions, retinal arterial occlusions, and age-related macular degeneration, has been extensively examined in the recent literature, few studies have investigated the use of OCT-A in Behçet uveitis(5-12).

The present study aimed to evaluate the quantitative OCT-A findings in patients with Behçet disease with and without uveitis and compare these findings with those in healthy controls.

This cross-sectional, observational study was conducted at Ankara Numune Training and Research Hospital, Turkey. The study protocol was approved by the Institutional Review Board and adhered to the tenets of the Declaration of Helsinki. Informed consent was obtained from all subjects before participation in the study.

Patients who fulfilled the diagnostic criteria of the International Study Group for Behçet’s Disease were included in the study between February 2018 and December 2018. Patients with other retinal and/or optic nerve diseases (diabetic retinopathy, hypertensive retinopathy, central serous chorioretinopathy, macular degeneration, glaucoma, optic neuropathy, etc.), cystoid macular edema (CME), refractive errors > ±3.0 diopters of spherical equivalence, history of ocular trauma or surgery within the previous 3 months, and systemic comorbidity that could affect the retinal microvasculature, such as diabetes mellitus and hypertension, were excluded. The patient group was divided into two subgroups. Patients without any evidence of active or inactive anterior or posterior uveitis were included in the non-ocular Behçet group and patients with a history of posterior uveitis or active posterior uveitis related to Behçet disease were included in the ocular Behçet group. The control group consisted of healthy subjects who visited our outpatient clinic for refractive error <3.0 D of spherical equivalence.

OCT-A images were obtained with RTVue-XR Avanti (AngioVue, Optovue, Inc., Fremont, CA, USA), which operates via the split spectrum amplitude decorrelation angiography algorithm and motion correlation technology built into the AngioVue system. A 6 × 6-mm frame centered on the fovea was scanned. After image acquisition, en face OCT angiograms were segmented to define the superficial and deep layers using the built-in automatic segmentation algorithm of the device(13). Eyes with a central macular thickness ≥300 µm, eyes with poor quality scans with a signal strength index of <40, and eyes with unreliable measurements due to extensive disruption of the microvascular structure were excluded from the analysis.

The newly developed AngioAnalytics software (version 2017.1.0.151) was used to obtain measurements of vessel density (VD) in the SCP and DCP, foveal avascular zone (FAZ) area, FAZ perimeter, acirculatory index (AI), foveal VD 300 µm around the FAZ (FD-300) in the total retina, and nonflow area in the superficial retina and compare the measurements with those of the healthy controls(14). If both eyes were eligible for the study, the data collected from the eye with better image quality were used in the analysis.

The statistical analyses were performed using SPSS version 17.0 (Chicago, IL, USA). The normality of the data was determined by Shapiro-Wilk test. The Kruskal-Wallis test was used to compare the OCT-A parameters among patients with Behçet disease with ocular involvement, patients with Behçet disease without ocular involvement, and control subjects. The categorical variables were analyzed using Pearson’s X2 test, and Pearson correlation analysis was used for correlative analyses. Quantitative variables were presented as mean ± standard deviation. A p-value <0.05 was considered statistically significant, except in subgroup analyses requiring Bonferroni correction, in which appropriate adjustments were made.

The foveal VDs in both the SCP and DCP were similar among the groups (p=0.9, p=0.6; respectively). The parafoveal and perifoveal VDs in the SCP and DCP were significantly reduced in patients with Behçet uveitis. FD-300 was also significantly reduced in the Behçet uveitis group. There was no significant difference in FAZ area, FAZ perimeter, AI, or nonflow area measurements among the three cohorts (Table 2).

The VDs in patients with Behçet disease without ocular involvement were lower than those in the healthy controls, but this difference did not reach statistical significance (Table 2). 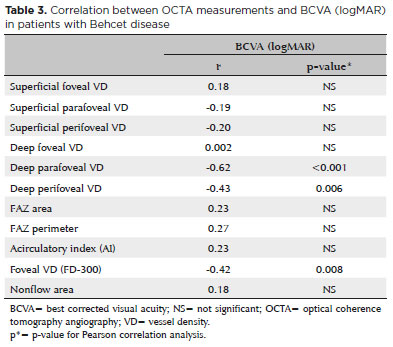 Ocular involvement is a leading cause of morbidity in Behçet disease. Despite the advances in treatment, the estimated risk of loss of useful vision in patients with Behçet uveitis is 25% at 10 years(15). The typical ocular manifestation is in the form of relapsing remitting nongranulomatous panuveitis with retinal vasculitis. Fluorescein angiography and OCT are currently the most commonly used methods in detecting and monitoring vascular lesion activity and associated secondary retinal complications in patients with Behçet disease(2).

OCT-A is a novel, noninvasive imaging technique that has the ability to segment different layers of the retina and provide a detailed view of the retinal and choroidal vasculature for quantitative and qualitative analyses. While the inability of the current OCT-A technology to detect vascular leakage precludes its use as the sole diagnostic tool in uveitis follow-up, it is still a valuable tool that allows better visualization of microvascular alterations and can provide new objective biomarkers for ocular inflammation(16-19).

FD-300, the foveal VD in the area 300 µm around the FAZ, is a relatively new OCT-A parameter that can be helpful in early detection of macular nonperfusion(20). Unlike the foveal VDs measured by the density assessment tool of the software, FD-300 shows the VD at a distance of 300 µm around the FAZ and is not affected by FAZ diameter(21). In the present study, the foveal VDs measured by the density assessment tool were similar between the groups. However, FD-300 was significantly lower in patients with Behçet uveitis. This finding suggests that changes in FD-300 can be a more valuable marker for detecting changes in macular perfusion.

Alterations in the FAZ can be an early predictor of macular ischemia. While the data from most OCTA studies in retinal vaso-occlusive diseases and diabetic retinopathy support this hypothesis, the findings in Behçet disease are contradictory(7,22-24). Cheng et al.(10) showed that the FAZ was enlarged in patients with Behçet uveitis with more than five attacks. However, Khairallah et al.(11) were unable to detect a significant difference in the FAZ area between patients with Behçet disease and healthy controls. In the present study, the FAZ area and perimeter were measured in the full retina and larger in patients with Behçet disease, but this difference did not reach statistical significance. The high variability of the FAZ area within the population might have masked the changes in FAZ characteristics in our patient group.

In patients with Behçet disease, there was a significant correlation between BCVA and DCP parafoveal and perifoveal VDs (Table 3). A similar correlation between global and regional deep capillary VDs and BCVA was also reported in a previous study(10). As a quantitative measure of the degree of macular ischemia, such a correlation between VD and visual acuity is understandable. Future longitudinal studies are required to ensure that these parameters can be used as predictors of visual outcome in Behçet uveitis.

The relatively small sample size and its cross-sectional design are the major limitations in our study. OCT-A image artifacts are common. Eyes with uveitis with poorer vision may have been more likely to be excluded due to inadequate scan quality resulting from the inability to fixate well during OCT-A acquisition. This may have led to study bias toward eyes with better visual acuity. The current algorithm in the AngioVue software does not allow evaluation of the middle capillary plexus (MCP). Future studies can focus on assessing the SCP, MCP, and DCP separately as they can show different levels of nonperfusion. The extramacular retina was not evaluated in the current study.