Chronic and severe intraocular inflammation are often associated with ocular complications, such as glaucoma or cataract(3,4). Therefore, patients with uveitic eyes are highly at risk of requiring intraocular surgery. In case of corneal endothelial damage, intraocular surgery might be even more challenging in uveitic eyes combined with posterior synechia, small pupil, and fragile zonules(3). In previous studies, anterior segment inflammation was associated with lower ECD and variation of morphologic features including cell size and hexagonal cell ratio(5-8). Another study showed that lower mean corneal hysteresis and corneal resistance factor found in anterior uveitis(9). Some investigators also reported corneal thickness (CT) alterations that tended to increase during an attack and decrease with the treatment for anterior uveitis(10-13). Laboratory studies suggested that intraocular inflammatory reactions mediated by inflammatory cytokines in the aqueous humor might be responsible for corneal alterations in uveitic eyes(14-16).

Although previous studies revealed some alterations in the corneal endothelium and CT, small sample sizes, lack of appropriate control groups, or discrimination of active/inactive uveitis cause difficulties in making clear comments on the effects of intraocular inflammation on corneal structures(5-7). This study aimed to assess the corneal ECD and morphological features as well as other anterior segment parameters including corneal volume and thickness, maximum keratometry, anterior chamber depth (ACD), and anterior chamber volume (ACV) as measured by Pentacam HR in patients with noninfectious intraocular inflammation. To our knowledge, this is the largest study evaluating the effects of active/previous anterior segment inflammation on corneal and anterior chamber morphology in phakic eyes.

This prospective cross-sectional study was conducted at a tertiary setting during the approval of the Institutional Review Board and adhered to the principles of the Declaration of Helsinki. Data at the time of enrollment to the study was compared between the study and control groups. All participants provided written informed consent. The study group consisted of patients with noninfectious intraocular inflammation, whereas the control group included healthy participants. The study was group further divided into two groups based on uveitis activity. All participants underwent a comprehensive ophthalmic examination, including anterior and posterior segment examination and intraocular pressure measurements. Anterior chamber cells and uveitis category were scored based on definitions published by the Standardization of Uveitis Nomenclature Working Group(17). The time since uveietis diagnosis, the coexistent of systemic inflammatory diseases, number of previous uveitis attacks, and medications (topical/intraocular/systemic steroids, anti-metabolites, and biological agents) were also recorded. Exclusion criteria were having ocular diseases that affect the cornea and anterior segment (corneal pathology, infectious keratitis/conjunctivitis, etc.), history of ocular trauma, intraocular surgery, and contact lens wear; and having poor quality images on specular microscope and Pentacam HR.

In the control group, measurements of only one eye per patient were considered for analysis as findings of the right and left eyes were almost identical. In patients with bilateral uveitis, both eyes were analyzed since each uveitis attack may have different severities and influence of attack may vary between the eyes. 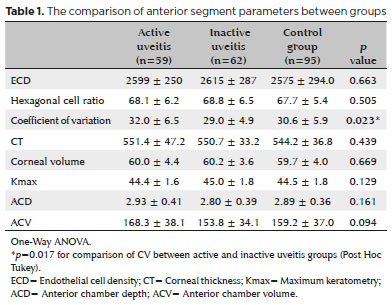 The duration of uveitis and number of attacks were not significantly correlated with ocular parameters (p>0.05, Spearman’s correlation). The difference in parameters was not significant based on the uveitis type (p>0.05).

In this study, CV was found to be higher in the active uveitis group than that in the inactive uveitis group after adjusting the duration and type of uveitis, presence a rheumatologic disease, and presence immunosuppressive treatment. The difference in anterior segment parameters was not significant between the uveitis and control groups. To our knowledge, this is the largest study evaluating the corneal and anterior chamber morphology in phakic uveitic eyes.

The corneal endothelium in uveitic eyes may be prone to damage in several ways. Pro-inflammatory cytokines and chemokines had been detected within the ocular fluids or tissues in uveitic eyes(14,15). They were suggested to be responsible for tissue damage and ocular complications in uveitis(16). In an endotoxin-induced uveitis model, investigators observed that corneal edema and significant corneal thickening in the cornea compared with the control group and showed that corneal structure could be altered during inflammation(18).

Corneal endothelial damage may be clinically significant in uveitis in two ways. First, uveitic eyes often require intraocular surgeries due to secondary ocular complications such as cataract and glaucoma(3,4). As intraocular surgery itself is a trauma for endothelium, any additional endothelial damage may further affect the postoperative corneal transparency and visual outcome. Second, CT alterations may affect intraocular pressure measurements and may serve as a confounding factor during the follow-up of uveitis patients with glaucoma(19). Therefore, the effect of intraocular inflammation corneal parameters should be clearly understood.

Previous studies focusing on specular microscopic findings in patients with uveitis reported ECD alterations in a small series(5,6). In recent years, Alfawaz et al. compared corneal endothelium in 84 eyes with active or previous anterior segment intraocular inflammation with a historical population of normal, age-matched participants as the primary control group(7). The authors reported that ECD was lower in eyes with uveitis than in the control eyes, whereas CT was similar between the two groups. Lack of elimination of pseudophakic eyes and a relatively small number of patients in subgroups cause difficulties comparing findings with other studies. In another recent study, Guclu et al. assessed the effects of previous inflammation on corneal ECD and morphology(8). Investigators found a significant decrease in ECD and hexagonal cell ratio, whereas increased CV in the eyes with inactive uveitis was compared to that in control patients. CT was not significantly different between eyes with inactive uveitis and controls.

In this study, CV was significantly higher in active uveitis than that in inactive uveitis group; however, it was not significantly different between inactive uveitis and controls, suggesting that CV alterations, which might reflect the variation in individual cell area caused by stress during active inflammation, were reversible. ECD and hexagonal cell ratio were similar between active, inactive uveitis, and control groups in this study. Previous literature reported that increased CV might occur without ECD changes in certain stressful conditions(20). Persistence of CV alterations in inactive uveitis may be suggested by Guclu et al., which might be associated with the duration of previous active inflammation; however, further studies are needed for further clarification(8).

CT was shown to increase during an acute uveitis attack(10-13,21,22). However, a significant difference was observed in CT between the groups, irrespective of activity; similar to Alfawaz et al. and Guclu et al.’s studies(7,8). Since some patients were diagnosed and started treatment before the referral in our hospital, our examination might not be at the most initial period of the attack and therefore might not reflect the effect of the maximum inflammation level on the anterior segment. The difference in findings of these studies may be related to different timing of examination as well as differences in sample sizes ranging from 13 eyes to 121 eyes as in our study.

One of the limitations in this study is the lack of laser flare photometry measurements. The second limitation is that the number of attacks was recorded based on the information provided by patients without previous records in our hospital. Third, some patients presented to our clinic undergoing treatment alreadly; therefore, measurements were not performed on the maximum inflammation level in the active uveitis group. Fourth, participants in this study were patients undergoing uveitis treatment and under follow-up; therefore, findings did not reflect the chronic results and untreated intraocular inflammation. Final limitation is that 16% of eyes in our series had intermediate or posterior uveitis that may demonstrate minimal or no cells in the anterior chamber.

In conclusion, we found that CV was significantly higher in eyes with active uveitis compared to eyes with inactive uveitis; however, ECD, hexagonal cell ratio, and anterior chamber parameters were similar between uveitic eyes and controls, regardless of uveitis activity. Our findings suggest that some corneal morphological changes appear with intraocular inflammation in the active phase; however, uveitic eyes during the inactive phase are not likely to show significant and permanent anterior segment alterations.

5. Olsen T. Changes in the corneal endothelium after acute anterior uveitis as seen with the specular microscope. Acta Ophthalmol (Copenh). 1980;58(2):250-6.