Influence of pupillary dynamics on the defocus curve of eyes implanted with diffractive multifocal lenses: a randomized study

A previous report correlated larger pupils with better distance visual acuity(9), regarding the pupil as an aperture in the optical pathway. However, visual acuity at different distances may not represent the full range of vision that is possible with multifocal IOLs. The defocus profile seems to be a more precise way to analyze visual performance of different IOLs. On the other hand, quantification and measurement of the defocus profile may be a complicated task. Buckhurst et al. recently proposed an “area-of-focus” metric, a calculation based on the area of visual acuity within the range of the defocus profile, which provides a simple method of evaluating IOL defocus profiles(10). In this study, the influence of a monofocal IOL, a diffractive mfIOL a refractive mfIOL, and a mix-and-match combination of two mfIOLs on the area-of-focus was described, while the influence of pupil size on the area-of-focus metric of mfIOL was not evaluated(10). In this context, we aimed to evaluate the influence of pupil size under photopic conditions on the area-of-focus from eyes implanted with a monofocal aspheric IOL and an apodized diffractive multifocal IOL.

This interventional, prospective, randomized study was performed at the Department of Ophthalmology, School of Medicine of Ribeirão Preto, University of São Paulo, Brazil in 2012 and 2013.

The study protocol was approved by the Hospital Ethics Committee under process number 11843/2010, but the study was not registered as a clinical trial. The tenets of the Declaration of Helsinki were followed. Patients from the ophthalmology outpatient clinic at the Department of Ophthalmology who opted for bilateral phacoemulsification were screened to be eligible for the study. Informed consent was obtained from all patients. The exclusion criteria were any ocular disease other than cataract, corneal astigmatism >1 diopter (D), and spherical equivalent < - 3 D or > + 5 D. Patients were eligible for randomization if they had bilateral cataract and corneal astigmatism <1 D. Since these patients had no ocular disease except cataract, we expected similar postoperative far visual acuity in all groups. Therefore, the area-of-focus is reported as the primary outcome. This is a calculation derived from the defocus curves, and its variability was estimated retrospectively from patients implanted with SN6AD1 showing a mean of 3.0 logMARxD and a standard deviation of 1.4 logMARxD. Consequently, to achieve 80% power in detecting a between-group difference of 3 logMARxD, the calculated sample size would be 11 patients per group.

The study comprised two different IOLs: the diffractive multifocal IOL SN6AD1 (mfIOL) and the aspheric monofocal IOL SN60WF (aIOL). Both are single-piece lenses with ultraviolet and blue light filtering capabilities. The SN6AD1 has an apodized diffractive pattern that results in an addition of + 3.0 diopters on the IOL plane. The anterior surface is designed with negative spherical aberration (-0.1 µm). The SN60WF is a monofocal IOL with an aspheric design (-0.2 µm) to compensate for the corneal spherical aberration.

The patients were randomly assigned to receive either a ReSTOR SN6AD1 (Alcon, Novartis, Freiburg, Switzerland) (n=20) or an SN60WF (n=20) bilaterally and were evaluated at baseline, postoperative days 1 and 10, and 1, 3, and 12 months after surgery. Phacoemulsification was performed under topical anesthesia through a 2.75-mm incision with a capsulorhexis of 5 to 5.5 mm. All IOLs were implanted in the capsular bag. 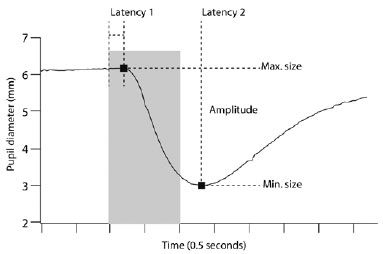 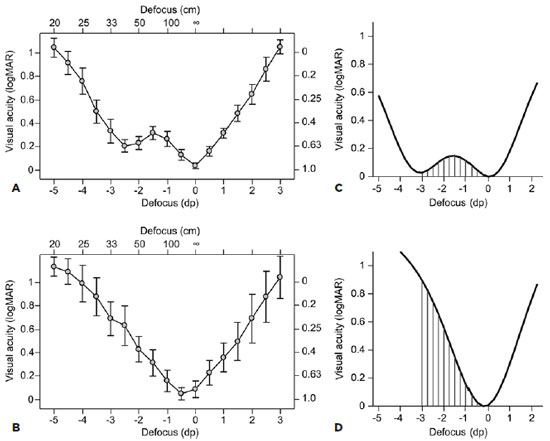 Pupillometry was performed after a short period of dark adaptation (at least 2 minutes) using a camera-based, commercially available, pupilometer (ISCAN, Woburn, MA, USA) with a 60-Hz frame rate. Light stimuli were generated using a ganzfeld light source (ColorDome, coupled to the control unit, the Espion E2- Diagnosys-LLC, Lowell, Massachusetts, USA), and consisted of 1-second flashes of 30 cd/m2. The pupilometer and the light source were synchronized by connecting the pupilometer output trigger to the Espion external input channel. The stimuli were repeated six times for averaging and rejection of potential blink artifacts, with a 5-second interstimulus interval. The sessions took approximately 10 minutes.

As expected, due to the randomized protocol, there was no difference between the groups in preoperative corrected distance visual acuity (CDVA): 0.26 ± 0.02 logMAR for the mfIOL group and 0.30 ± 0.03 logMAR for the aIOL group (P=0.2893, ANOVA). There were also no significant differences between the groups in preoperative uncorrected distance visual acuity (UDVA) correction; or near, with or without correction (CNVA and UNVA), preoperative spherical equivalent or astigmatism (p>0.05).

Postoperatively, there was no significant difference between the groups in CDVA measured 1 month after the procedure (p=0.8724, ANOVA). The mean CDVA was 0.05 ± 0.02 and 0.03 ± 0.02 logMar for the mfIOL and aIOL groups, respectively. CDVA remained at these levels during 48 weeks of follow-up.

There was no statistically significant difference between the mean minimum pupil sizes of the mfIOL and the aIOL groups: 3.1 ± 0.1 and 3.2 ± 0.2 mm, respectively (p=0.7272). There were also no statistically significant differences between the groups in maximum and minimum pupil size, latency 1, or latency 2. 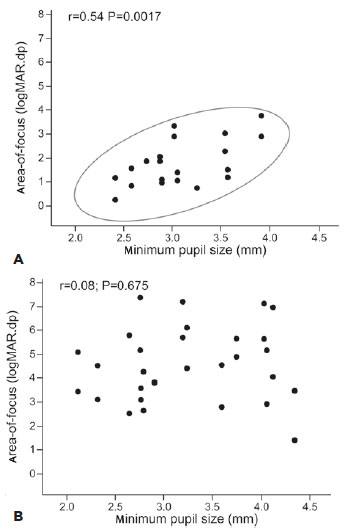 Theoretically, optical quality measured by modulation transfer function and halo size, even of diffractive multifocal IOL, decreases as pupil size increases(11). However, Santhiago et al. found no effect of pupil sizes of 6 or 4 mm on the modulation transfer function(12). Thus, the effect of pupil size on optical quality after implantation of an mfIOL is controversial. These studies regard the pupil as an aperture in the optic pathway and not as a result of a complex neural pathway. On the other hand, clinical studies show different results. For example, Alfonso et al. reported better distance visual acuity and worse near visual acuity in patients with large pupils(9). These results seem to be in contrast to our results, but the results are not comparable. Alfonso et al. reported statistically significant correlations between pupil size and visual acuity, with r=0.297 for distance visual acuity and r=0.276 for near visual acuity, which are not strong correlations(9). In their study, pupil size was measured under illumination of 85 cd/m2, whereas in our study we measured the minimum pupil size at 30 cd/m2.

The defocus profile should be taken as a standardized measurement, especially if visual improvement after mfIOL implantation should be evaluated. Furthermore, we believe that the described area-of-focus is an objective index of visual performance in eyes with such IOLs. We found that the smaller the pupil became after eyes were exposed to a strong light (30 cd/m2), the better was the area-of-focus in eyes implanted with an mfIOL.

Reasonably, under visual acuity testing or reading conditions, the pupil would be larger than during this experimental setting, so that pupil size might not be regarded as an aperture. Nevertheless, the fact that the pupil is able to contract to smaller sizes under strong light exposure indicates the health of a complex neuro-muscular system. For instance, individual pupil size is influenced not only by retinal or neural disorders but also by fatigue(13), intelligence(14), emotional state, or even music(15). Training also has an impact on visual performance with mfIOLs(16), while psychological characteristics have an impact on the perception of halos(17).

Accordingly, we propose that studies regarding the pupil size of the patient as a simple aperture should simulate a pupil size with pinholes of different sizes(18) rather than dividing patients into groups with different pupil sizes.

This study has a potential methodological limitation that is related to the measurement of defocus, which could also be measured binocularly, and to the small number of patients included. The study only shows the results for one special mfIOL, and therefore the results might not be extrapolated to other types of mfIOLs. More studies using the area-of-focus and pupillary dynamics assessment are needed to answer the question whether the showed correlation of minimum pupil size and area-of-focus für one special mfIOL is also the true for other IOLs.

Pupil size may influence visual performance with multifocal IOLs. Until now, studies have regarded the pupil as a pinhole and analyzed visual acuity at different distances. A complete analysis of the defocus profile with an area-of-focus metric and correlation with pupil dynamics has not been performed.

What this paper adds

The area-of-focus metric is a single value that quantifies the range of vision. This is the first study that correlates this value with pupil dynamics. The smaller the pupil becomes, the better the value of the area-of-focus.

This research was funded by the Fundação de Amparo à Pesquisa do Estado de São Paulo (FAPESP) (grant number 2012/19496-3). The costs of the surgery were covered by the Sistema Único de Saúde (SUS). The grant covered extra expenses, such as the implanted IOLs and the pupilometer.