Microperimetry biofeedback training is a vision rehabilitation method that involves the training of attention and oculomotor control, and the rehabilitation of poorly located and non-functional preferred retinal loci. It can significantly improve distance and near visual acuity in age-related macular degeneration. Previous studies have shown that biofeedback training using electrical nystagmography can reduce nystagmus amplitude and increase foveation time. However, these improvements have not been sustained following training sessions. We hereby report a pediatric case of idiopathic nystagmus in an 11-year old patient treated with microperimetric biofeedback to improve visual acuity and fixation stability. The training had a beneficial impact, positively affecting fixation stability as well as distance and near reading vision. Subjectively, improvement in quality of life was also reported. Conversely to previous studies, the positive effects in this case were maintained for as long as twelve months following therapy. To the best of our knowledge, this is the first case with long-term benefits to be reported in the literature.

Infantile idiopathic nystagmus syndrome (IINS) or congenital motor nystagmus is the most common type of infantile nystagmus. It is identified by a characteristic waveform eye movement pattern with an exponentially-increasing velocity of slow-phase followed by a saccadic fast phase. IIN is almost always bilateral and conjugate, and occurs in the horizontal plane in both upgaze and downgaze, with little variability(1).

When the patient is asymptomatic, no treatment is required. However, if the patient’s visual acuity is decreased, or if they exhibit abnormal head posture, or oscillopsia, interventions are warranted. Traditional therapies include muscle surgery, optical devices, drugs, and botulinum toxin injections(2,3).

Most current available therapies aim at changing the functional balance among eye muscles responsible for eye movements with the hope that they will improve ocular stability and foveation time for incoming images, resulting in better vision.

Previous studies using electrical nystagmogram have shown fixation stability improvement and enhancement of foveation time during audio BT, but only one of these cases reported using microperimetry(6-8). No previous literature exists on the use of microperimetric BT for children with IINS. Thus, we report the long-term outcome of one successfully treated child with IINS to provide evidence for the feasibility of this new intervention in clinical pediatric nystagmus practice.

The patient was first seen at the Low Vision Rehabilitation Service at the University of Toronto, and had previously been diagnosed with IIN, but no other pathologies. Informed consent was obtained from the parents.

The BT protocol involved four consecutive weekly sessions of training as described elsewhere(5). Each session included four BT attempts of about 5-10 minutes each. The patient was given take-home efficiency reading exercises weekly, to be completed with the better eye near correction.

The patient described in this report was an 11-year-old male with IINS. BCVA measured with ETDRS charts was 20/60-2 for the right eye (OD), 20/80 for the left eye (OS), and 20/50 with both eyes (OU). Better near vision was achieved with a +4.00 add that gave the patient 20/25 for near vision. Cycloplegic refraction was -5.50 sph + 3.50 cyl x 110 (OD) and -5.00 sph + 4.00 cyl x80 (OS). The patient was orthophoric, with a latent-manifest, jerk type, right-beating nystagmus with a null point in convergence. Five base-out prisms for each eye, a x 2.5 monocular telescope for distance spotting, and reading glasses with a +4.00 add were all prescribed. Tests using the MAIA microperimeter (Centervue, Padova, Italy), indicated a fixation stability of 13.1 squared degrees (sq; unstable fixation) and a nystagmus amplitude estimate of 11.3 degrees in the OD (Figure 1). The OD eye was selected for BT. 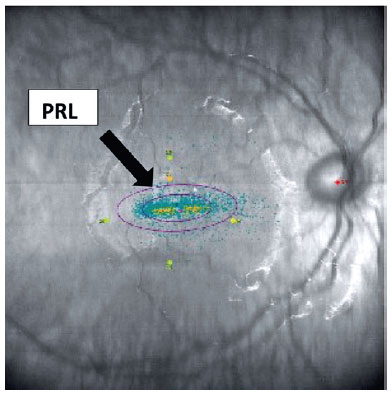 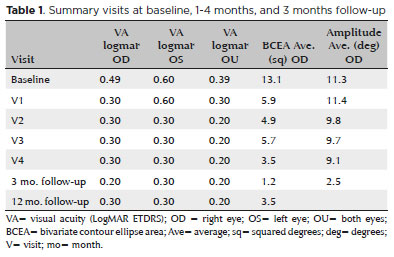 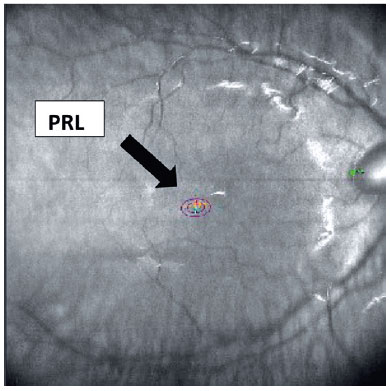 The use of BT in nystagmus was described as early as 1980(6). Yet, the utilization of this rehabilitation method never reached the clinical environment for various reasons. Mostly, this was because the required instrumentation remained as laboratory-based devices which tested various aspects of the proposed training. In addition, no methodology was developed to follow the long-term efficiency of the method, resulting in persistent doubts regarding its efficiency(7). Recently, following the introduction of microperimetry instruments(5) in the clinical environment, BT was revisited for the treatment of nystagmus, and positive outcomes were published in the literature(8). According to these reports, it seems that the core of the BT method is based on improving oculomotor control through attention, yet its mechanism of action is still not completely understood(7,9).

Our study comprised of one clinical nystagmus case which was treated with BT, with extremely positive results. As reported above, a significant improvement in distance visual acuity was seen, which was confirmed by a corresponding reduction in fixation stability, a significant reduction in nystagmus amplitude estimates, and a report of improved general quality of life parameters. In addition, the effects of the training were maintained one year following the end of the training, which has never been reported in the literature previously.

While previous studies used electrical nystagmography connected to audio BT, our case was trained using microperimetry with audio-luminous BT. This difference in methodology may explain the more positive outcomes found in our study in comparison to previous studies. These previous studies did not report a sustained benefit of BT, while our case was able to maintain this benefit for one year. The younger age of our patient, which may have been related to increased brain plasticity in the patient(10), possibly contributed to this difference.

It is feasible for the BT protocol used in this study to be applied in a clinical setting. This study has demonstrated very promising outcome measures following BT, thus promoting greater experimentation with this rehabilitation method in clinical practice. A prospective randomized trial is required in the future to verify the results of this study.