The capsular tension ring (CTR) is designed to stretch the lens capsule and thereby maintain the circular contour of the capsular bag after cataract extraction(1). Since the introduction of the CTR, some of its features have been improved to allow implantation of an intraocular lens (IOL) in the capsular bag based on the surgeon’s evaluation of the compromised zonular fibers(2). CTR usage is becoming more common in cataract surgery. When the CTR is placed in the capsular bag, it supports the area of zonular weakness and redistributes the forces equally over all zonules(3,4). It also stabilizes the capsular bag and the IOL during and after cataract surgery. CTRs are typically used in eyes with presumed or actual zonular weakness or dialysis. These are mostly caused by pseudoexfoliation (PXF) syndrome, high myopia, mature cataracts, ocular trauma, or Marfan syndrome(2,4-6).

PXF syndrome is a disease with an unknown etiology that may cause multisystemic and ocular complications(7). PXF is characterized by the production and accumulation of age-related abnormal fibrillary material in various eye tissues(8). The diagnosis of PXF syndrome is made by observing gray-white fibrogranular PXF material on the lens anterior capsule or pupil edge during anterior segment examination(9). PXF syndrome is associated with poor pupillary dilation, zonular weakness leading to intraoperative or postoperative lens dislocation, and vitreous loss(10).

This was a prospective, comparative, single-center study conducted in the Department of Ophthalmology of the Inonu University Faculty of Medicine, Malatya, Turkey, a tertiary care center.

Patients who underwent phacoemulsification surgery, posterior chamber IOL, and CTR implantation were included in the study. All participants gave informed consent before the surgery and the study. The tenets of the Declaration of Helsinki were followed. The study was approved by the Malatya Clinical Research Ethics Committee.

Patients with zonular weakness due to PXF syndrome were included in the study. A complete ophthalmic evaluation was performed in all patients, including assessment of best corrected visual acuity (BCVA), anterior segment evaluation, intraocular pressure (IOP) measurement, and posterior segment evaluation. A B-scan was performed when the fundus was not visible. BCVA was evaluated using Snellen charts. Patients who had apparent zonulysis and lens dislocation, previous ocular surgery or laser therapy, or a history of any ocular disorder, trauma, or glaucoma were excluded from the study.

The same surgeon performed all surgeries with the patient under local or general anesthesia. A 5.5-mm capsulorhexis and multiquadrant hydrodissection were performed in all eyes. Viscodissection was performed only in group 1 patients using a cohesive ophthalmic viscosurgical device. In group 1, the CTR was placed after hydrodissection and viscodissection. Nuclear phacoemulsification was performed by the quick chop technique. In group 2, the CTR was placed after the nucleus and cortex were removed. A polymethyl methacrylate CTR type 4 (13-11 mm; Madhu Instruments, New Delhi, India) was inserted into the capsular bag of all eyes with forceps. A foldable posterior chamber IOL was implanted into the capsular bag in eyes with an intact capsular bag or in the ciliary sulcus in eyes with a capsule rupture.

A total of 43 patients, 16 in group 1 and 27 in group 2, were included in the study. No statistically significant differences were observed between the groups in gender, age, operated eye, preoperative BCVA and IOP, timing of the decision to use the CTR, degree of zonular weakness, axial length, or requirement for an iris hook (Table 1). 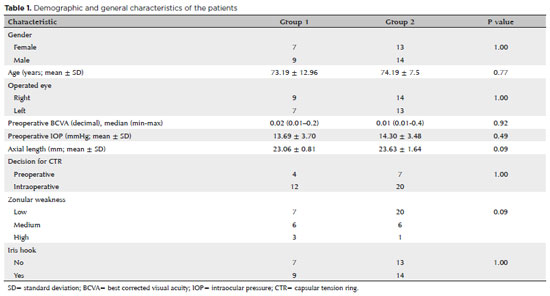 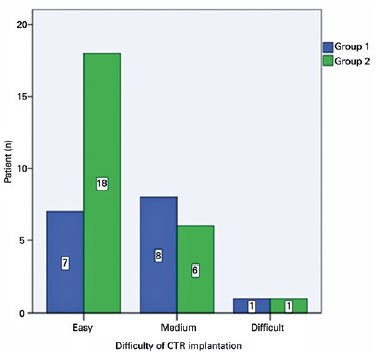 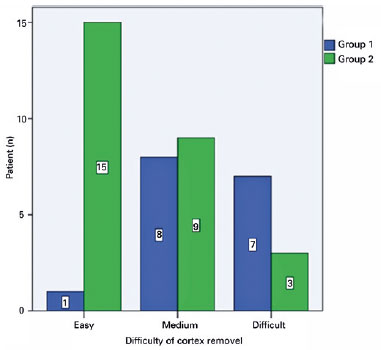 Subluxed lenses and zonular weakness can result from trauma, previous surgery, mature cataracts, high myopia, and PXF. PXF syndrome is the most common cause of zonular weakness(11). Therefore, we included only patients with PXF syndrome in our study to ensure homogeneity and to obtain patients more quickly. The CTR has been of significant value in the management of cataract surgeries with zonular weakness. It can provide excellent capsule bag support to absorb tension from existing zonules and support areas of weakness(3). After a capsulorhexis is performed, the CTR can be implanted at any step of phacoemulsification; however, the optimal timing remains controversial(12). Unfortunately, only a limited number of studies have compared early and late CTR implantation.

Some authors advise early CTR implantation because it supports the area of zonular weakness and distributes the forces equally over all zonular areas(4,13,14). When a CTR is placed prior to lens extraction, the capsular bag remains supported during the most critical intraoperative steps(3). Ahmed et al. evaluated the optimal timing of CTR implantation in cadaver eyes(3). They implanted the CTR early in two eyes and late in two eyes. They reported that early implantation of the CTR before lens extraction was associated with a marked increase in capsular bag displacement and zonular elongation compared with late implantation. Jacob et al. reported a 9.5% incidence of a clinically significant extension of zonular dialysis with the use of CTRs in 21 eyes with mild to moderate zonular dialysis in which the CTR was implanted before phacoemulsification(13). Another problem with early CTR placement is that it can make cortical removal more challenging and tedious. In our study, there were no increases in capsular bag displacement and zonular weakness in either group.

Since the usage of the CTR, several complications associated with the CTR have been reported. These include accidental anterior capsule tears during CTR implantation, posterior dislocations of the CTR, and intraoperative dislocations after early CTR implantation in the capsular bag(16-18). In the present study, there was no significant difference between the groups in the number of patients who had an intraoperative complication (p=0.18). In group 1, two patients had surge and one patient had a capsular rupture at the equatorial region. In group 2, posterior capsule fluctuations were observed in eight patients (29.5%), resulting in posterior capsule rupture in two of these patients, surge in two patients, and difficulty in capsulorhexis in one patient.

This study has some limitations. A better comparison could have been made with more participants. The degree of zonular weakness and the difficulty of CTR implantation and cortex removal were evaluated subjectively, which may have caused some bias. We used the effects of CTR during surgery and intraoperative complications in the evaluation of the optimal timing for the CTR implantation. Furthermore, more detailed information could have been obtained by comparing the long-term postoperative effects.

The manuscript was edited by Scribendi Academic Editing Services.