PURPOSE: To evaluate the relationship between the incidence of complications and functionally monocular patients’ emotional reactions during phacoemulsification under topical anesthesia.
METHODS: We enrolled 22 functionally monocular patients (11 males and 11 females; group 1) and 19 age- and sex-matched controls (6 males and 13 females; group 2) in this prospective, interventional, cross-sectional, case control study. Demographics data, including age, sex, and educational background, were collected. Surgeries were performed by the same surgeon, and during surgery, the patients’ vital signs (blood pressure and heart rate) and surgical events (duration, body movements, signs of increased vitreous cavity pressure, difficulty in performing capsulorhexis, and complications) were noted. Pre- and postoperative visual acuity was also analyzed.
RESULTS: The mean age of group 1 was 73.05 ± 13.31 years and of group 1 was 69.74 ± 16.81 years. There was no significant between-group difference in systolic and diastolic blood pressures. The average heart rate was similar in both groups, too. During surgery, the surgeon’s perception of excessive eye, eyelid, or head movements in both groups was similar, in addition to signs of increased vitreous cavity pressure.
CONCLUSION: It is safe to perform phacoemulsification under topical anesthesia in functionally monocular patients, who apparently behave similarly to binocular patients.

Blindness is a major public health issue(1,2). In the event of severe vision loss in one eye, the patient is considered monocular if Snellen best-corrected visual acuity (BCVA) in the other eye is worse than 20/200(3,4).

Cataracts are responsible for approximately 50% of blindness cases in Brazil(5). Ophthalmologists, in general, are reluctant to recommend surgery if a patient with one blind eye develops a cataract in the other eye because any surgical complication might cause blindness(6). On the other hand, monocular patients may delay necessary surgery for fear of surgical risks and become blind as a result(4).

Phacoemulsification is usually performed with the patient is awake, and topical anesthesia is the most frequent choice of experienced surgeons(7). In monocular patients, anxiety manifestations, such as uncontrolled head or eye movements, might make the surgery more difficult and increase the incidence of complications(3,8,9). Fear and anxiety are higher in monocular patients when phacoemulsification is recommended(10,11). However, there is little information available on the effects of such emotional factors during surgery. This study evaluated the possible relationship between the incidence of complications and functionally monocular patients’ emotional reactions during phacoemulsification under topical anesthesia.

This prospective, interventional, cross-sectional case control study was approved by the Universidade de São Paulo Ethics Committee according to the tenets of the Declaration of Helsinki, and the study protocol was approved by the University’s Institutional Review Board. We enrolled 41 patients, aged ≥40 years, consecutively screened for phacoemulsification in a tertiary referral center in São Paulo, Brazil between 2011 and 2012. The inclusion criterion was the absence of any eye alteration besides senile cataract in the eye to be operated on. Patients who could not be sedated and, thus, had to be given peribulbar block or general anesthesia were excluded. All patients willingly participated in the study. Patients were considered monocular via diagnosis of irreversible blindness in the contralateral eye, that is, BCVA <=20/200 according to Snellen chart or visual field <20º(8). Patients were considered binocular if both eyes, despite crystalline opacity, had potential vision and there was the possibility of significant visual acuity improvement after phacoemulsification(5).

All patients underwent a complete ophthalmologic examination with refractometry, applanation tonometry, biomicroscopy, and fundoscopy. Their vital signs were checked on admission (baseline) and 5 min after the beginning of surgery. Systolic blood pressure (SBP), diastolic blood pressure (DBP), and heart rate (HR) were measured by an experienced nurse, using an electric sphygmomanometer, and these parameters were used as objective measurements of anxiety, as previously described(6). After surgery, a trained investigator administered a questionnaire to the surgeon in order to evaluate any difficulties he encountered, any intraoperative complications, and whether the patients’ emotional state influenced the procedure (Attachment 1). During surgery, the surgeon registered signs of increased vitreous cavity pressure whenever they occurred. Such signs were characterized by at least one of the following manifestations: decreased anterior chamber depth, iris prolapse out of the incision, excessive surge during emulsification of nuclear fragments, and difficulty with implanting the intraocular lens. 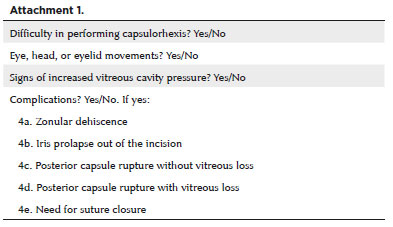 All procedures were performed under topical anesthesia. A specialist was always present, who would lightly sedate each patient for relaxation without loss of consciousness if the surgeon noticed increased anxiety.

Before surgery, the surgeon subjectively evaluated each patient’s cooperative conditions for the procedure. Most of the patients in both groups agreed to undergo surgery under topical anesthesia without complementary sedation. All phacoemulsification procedures were performed by the same surgeon, using the AMO Sovereign phacoemulsification system (Irvine, California, USA) technique, with a 2.75 mm corneal incision, no sutures, and hydroxypropyl methylcellulose viscoelastic material (Ophthalmos, São Paulo, Brazil). The Rayner Adaptis intraocular lens (San Diego, CA, USA) was implanted.

There were not statistically significant between-group differences in terms of age, gender, and educational background. There was no follow-up loss or exclusion of patients during the study. The mean age of group 1 was 73.05 ± 13.31 years and that of group 2 was 69.74 ± 16.81 years. There was no statistical between-group difference in the time between cataract diagnosis and surgery. The preoperative BCVA was also similar in both groups (p>0.05) (Table 1). 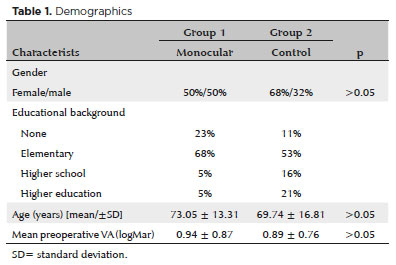 Phacoemulsification is one of the most performed standard procedures worldwide because of fast visual recovery and low intraoperative complications. However, if complications do occur, they might compromise visual acuity in the operated eye(12).

One advantage of phacoemulsification over extracapsular extraction of the crystalline lens is the fact that the former might be performed under topical anesthesia, with or without sedation, which decreases the risk related to anesthetic blockage and, therefore, clinically benefits patients(13). However, during phacoemulsification under topical anesthesia, difficulties and complications might arise because of emotional alterations, such as excessive fear and anxiety, resulting in occasional body movements or increased vitreous cavity pressure from excessive eyelid contraction(13).

A patient’s vital signs, such as BP and HR, are influenced by his or her emotional factors. These should be measured throughout the phacoemulsification procedure to monitor the patient’s anxiety state.

Marback et al. (2010) reported that functionally monocular patients show increased anxiety, fear, and doubts with regard to surgery compared to binocular patients. During surgery, anxiety manifestations, such as excessive eye, eyelid, or head movements, and other manifestations, such as decreased anterior chamber depth, excessive surge during emulsification of nuclear fragments, iris prolapse, or difficulty with implanting the intraocular lens, are similar in patients. Surgeons should consider these emotional reactions and invest more time in explaining surgery-related risks and benefits to their patients(4).

In cooperative patients, topical anesthesia is considered safer than the peribulbar technique(8). Surgery under general anesthesia is only indicated in patients who lack comprehension skills, such as children and mentally impaired individuals. So far, there is no evidence that sedation or general anesthesia reduces surgical risks in functionally monocular patients. In a retrospective study, Trotter et al. observed a similarity in the incidence of surgical complications among mono- and binocular patients during phacoemulsification in which different anesthesia techniques were used(9).

This study had a couple of limitations. First, the sample size was small. Second was the subjectivity involved in observation of emotional reactions during surgery.

In conclusion, it is safe to perform phacoemulsification in functionally monocular patients under topical anesthesia. These patients apparently behave similarly to binocular patients.