Prevalence of depressive and anxiety disorders in patients with glaucoma: a cross-sectional study

Purpose: Our goal was to analyze the prevalence of depression and anxiety among patients with glaucoma and to identify risk factors related to these disorders.
Methods: A cross-sectional study was carried out between August 2016 and August 2017 at the Hospital das Clínicas of Universidade Estadual de Campinas and at the Hospital Oftalmológico de Brasília to evaluate the prevalence of depressive and anxiety disorders among patients diagnosed with glaucoma. All patients underwent a complete ophthalmologic examination with standard automated perimetry to confirm the diagnosis of glaucoma. All participants were asked to complete the Hospital Anxiety and Depression Scale questionnaire.
Results: One hundred and twenty-nine patients were included in the study. Seventy-four were men (57.36%) and 55 (42.64%) were women. The mean age of the patients was 70.14 ± 15.8 years. Ninety participants were white (69.77%) and 38 (29.46%) were black. The study demonstrated a prevalence of depression and/or anxiety at 10.08%. Logistic regression revealed that women were at higher risk for anxiety and/or depression (OR: 5.25, p=0.015) and patients with a larger number of co-morbidities also were at higher risk for anxiety and/or depressive disorders (OR: 2.82, p=0.038).
Conclusion: A significant proportion of patients with glaucoma present with depression and/or anxiety. Females and patients with co-morbidities are at greater risk for these disorders.

Glaucoma is the most common cause of irreversible blindness in the world; the diagnosis of glaucoma has been associated with anxiety and depression, the two of the most prominent and pervasive psychiatric disorders(1,2). As in psychiatric disorders, age is an important risk factor for the development of glaucoma(3). Mental health may have an impact on clinical factors such as adherence to antihypertensive medication and treatment follow-up(4). By contrast, the prevalence of depressive disorders in patients with glaucoma may be high due to the fact that visual loss leads to a significant decrease in quality of life(5,6).

The primary objective of this study was to analyze the prevalence of depressive and /or anxiety disorders using the HADS instrument in a group of Brazilian patients diagnosed with glaucoma and to identify potential disease-related risk factors.

This cross-sectional study was conducted between August 2016 and August 2017 in accordance with the ethical principles of the Helsinki Declaration and the principles of the current Good Clinical Practices. The study protocol was approved by the Clinical Research Ethics Committee of the Faculty of Medical Sciences of the State University of Campinas. All patients provided written informed consent. The study was carried out by all authors; the second author ensured data integrity and accuracy and study analysis.

The stage of glaucomatous damage was defined according to Hodapp, Parish and Anderson criteria(14). We classified patients with advanced glaucoma when the mean deviation (MD) was <-12dB. We also identified patients with low vision according to International Classification of Diseases and Related Health Problems from World Health Organization, including patients with corrected visual acuity that was <20/70(16).

We also reviewed past and present medical histories for any of the following co-morbidities: diabetes mellitus, arthritis, hypertension, heart disease, depression, asthma, and cancer(5). A simple summation score was used to generate a co-morbidity index(17).

Data on gender, age, race, level of education, previous glaucoma surgery, use of antihypertensive eye drops, use of psychoactive substances and past or present psychiatric disorders and/or a specific history of depression and/or anxiety were also documented.

The Hospital Anxiety and Depression Scale (HADS) includes 14 items, seven of which are focused on the assessment of anxiety and seven on depression. Each of the items score from 0 to 3, with a maximum score of 42 points, 21 points for each scale. All patients who had a score greater than or equal to 12 on the depression or the anxiety scale were referred to psychiatric services for follow-up. All forms administered personally by the investigators (RYA, LNS and DMS) to provide support and ensure full comprehension of the questionnaire.

The normality of the sample distribution was evaluated by the inspection of histograms. Student’s t test was used for statistical evaluation continuous variables and for samples that showed a normal distribution. Categorical variables were compared using the Chi-square or Fisher’s test.

We performed a logistic regression to define the odds ratio of depression and/or anxiety disorder. We used as dependent variable patients who had a score greater than or equal to 12 on the HADS scale (coded as 0 or 1). The following parameters were used as independent variables (adjusted for continuous and categorical data): age, gender, race, marital status, education, family income, employment status, co-morbidity index, number of glaucoma eye drops used per day, presence of advanced glaucoma in one or both eyes, the degree of mean eye deviation, visual acuity, presence of low vision in one or both eyes, pseudophakia, use of topical beta-blockers and history of glaucoma surgery. Values of p<0.05 were considered statistically significant. All data analyses were performed using the statistical program Stata (version 13; StataCorp LP, CollegeStation, TX). 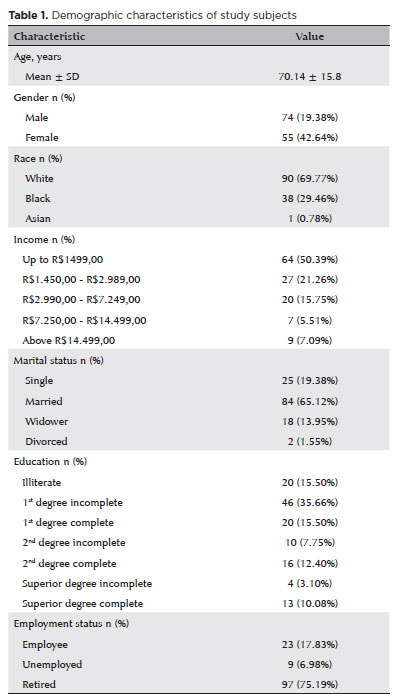 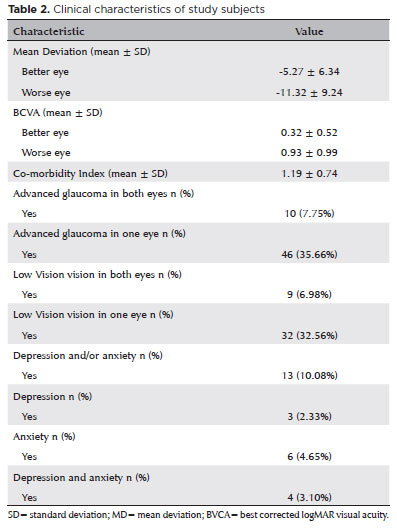 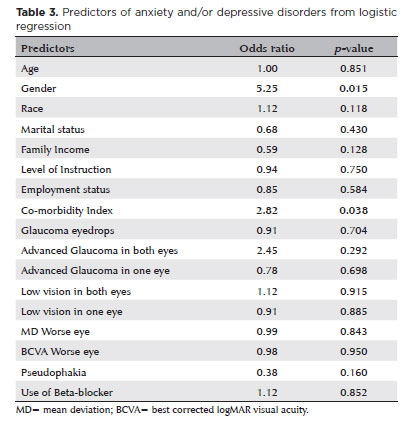 In this study, we determined the prevalence of depression and/or anxiety disorders among 129 patients diagnosed with glaucoma to be 10.1%. We also found that female glaucoma patients and glaucoma patients with a larger number of associated co-morbidities were at greater risk for depression and/or anxiety disorders. To our knowledge, this is the first study to examine the association between glaucoma and anxiety/depression disorders in Brazil, as well as to investigate potential risk factors.

Glaucoma is a chronic degenerative disease and the leading cause of irreversible blindness worldwide(18). Considering the asymptomatic nature of the disease and its potentially devastating outcomes, and likewise the economic impact related to the cost and side effects of antihypertensive medications used to control it, glaucoma might cause or aggravate pre-existing psychological burdens in this patient cohort(19). Anxiety and depression are common psychological disorders that are important public health problems(20,21).

It is also critical to consider these observations from the opposite perspective. It is also possible that the presence of depressive symptoms in patients with glaucoma may lead to poor compliance with the medication regimen(25,26). As such, it will be critical to provide these patients with adequate psychological care not only to improve quality of life but also to ensure medication compliance(25). In order to detect, prevent and treat anxiety and depression that may coexist among those with glaucoma, it is also important to have some comprehension of the risk factors associated with these psychological disorders. Our findings suggest that female gender and patients with a higher number of co-morbidities are at greater risk for a diagnosis of depression and/or anxiety.

We found that female patients had a 5.25-fold higher chance of succumbing to depression and/or anxiety disorders when compared to age-matched male patients (p=0.015). Among the 55 women from our sample, 10 presented with anxiety and/or depression, while only 3 of 74 men were diagnosed with the same disorders. Lim et al.(22) also reported that female glaucoma patients were more likely to suffer from depression. Tastan et al.(27) also found that the risk of anxiety in women with glaucoma was 7.5 times higher than in men. Society-driven risk factors for anxiety and depression in women are likely have a biological origin; among these traits, we consider differences in physical strength and related personality traits(28).

Previous studies have revealed that depressive disorders play important roles in the etiology, course, and outcomes associated with chronic diseases(20). In fact, patients with chronic medical illnesses are also known to be at high risk for both depression and anxiety(20,21).

Interestingly, objective measures of visual acuity and severity of glaucoma as defined by the mean deviation from standard automated perimetry were not at all predictive of depression or anxiety disorders. This may be explained due to the fact that our sample did not include a large proportion of patients with low vision and advanced glaucoma. However, earlier studies have demonstrated that objective measures of visual function may not be directly associated with the prevalence of psychiatric disorders(4). These results suggest that the association between glaucoma and depression or anxiety is complex and reflects the perceptions of patients and the subjective experiences of their illness rather than conventional objective measures, such as visual acuity or visual field.

We recognize that our study has several limitations. First, the study design is cross-sectional and there was no follow-up phase. Hence, we were not able to document the psychological changes that may become more or less evident over time. Second, our study did not include a control group which would have permitted us to determine whether the prevalence of psychiatric disorders is actually higher in the glaucoma group. We did not explore the duration of glaucoma in order to evaluate the possibility that length of disease might correlate with a higher prevalence of psychiatric disorders. Finally, although the HADS scale is easy and convenient for testing purposes, the questionnaire is not comparable to a formal psychiatric diagnosis from a mental health specialist.

In summary, this cross-sectional study revealed that a significant proportion of glaucoma patients also present with depression and/or anxiety disorders. We found that females and patients with co-morbidities were at greater risk for depression and or anxiety. Ophthalmologists should make an attempt to recognize these psychiatric disorders in patients with glaucoma and refer them to appropriate care; this will provide dramatic improvements in the patient’s quality of life(26). Ophthalmologists should also provide accurate and appropriate information about glaucoma to their patients in order to prevent the development of excessive and inappropriate anxiety and depression(29). Furthermore, longitudinal studies should be conducted with a larger sample size and with reliable tools that were designed to assess psychological disorders. This might be accompanied by an investigation into whether the treatment of these psychiatric disorders may result in an improved the quality of life for patients with glaucoma and promote increased adherence to anti-glaucomatous treatment.

29. Renaud J, Bédard E. Depression in the elderly with visual impairment and its association with quality of life. Clin Interv Aging. 2013;8:931-43.